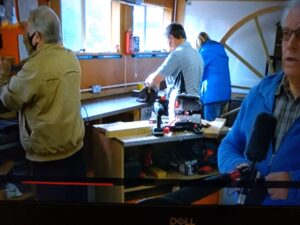 A message from BBC Look North on Thursday about World Mental Health Day led to some hasty arrangements to film about the role of Sheds in positive mental health of men and women and in combating the risk of suicides, particularly in men. 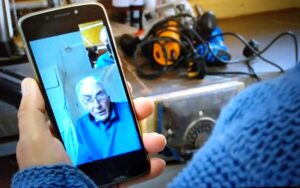 For all the Shedders, coming back to the Sheds recent;ly after so long in closure really brought home afresh what the Sheds achieve. Bringing people together with inclusive banter seems to fit the bill for so many. Sheds allow masks to drop.

Some very salutary comments too.

To All the Whitby Area Shedders – Great video – Well done – Good to see you fly the flag on Mental Health Day for Sheds, when most the of the mainstream media virtually ignored the day.

I have had two Shedders confide in me in the last two weeks that they have had a very close male relative commit suicide during the last few months.  I fear that this problem will grow and grow.

Best Wishes to all the Whitby Area Shedders

Thanks Patrick. The connection between Frome and Whitby Sheds has born quite a lot of from for us both I think. Two communities – not major towns or cities – seem to have hit it off. Sometime we will have to find a way to all join up – we’ve both got Zoom capability in our Sheds and it should not be beyond out wit to use that fact. Where would each of us be without Sheds – desperate is the truthful answer.

BayThorpe Shed is doing a stretch of community service 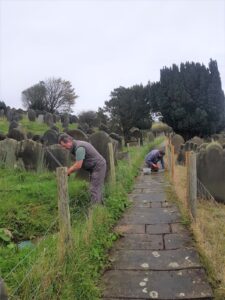 One foot in the grave

The Old St Stephen’s Church in Robin Hood’s Bay has history. That is demonstrated not only in the building itself but also the graveyard as you can see with apparently 200+ weathered gravestones. It also means a lot of maintenance that a small “church” team does. They needed help but how do you go about recruiting it?

Savvy Elaine helped out by posting an invitation for them on the Bay facebook page. Plus, some Shedders wanted to help too. The original team were so grateful for help.

Here is a update from Elaine:

“Stuart and Steve joined us at the old church for some clearing. I put a post and photo on RHB Facebook page saying that Shedders don’t just do projects for themselves, but also the community and it’s being well received!!”

Later today (Monday 12th October 2020) someone saw that post and enquired how they might join the BayThorpe Shed.

A verbal snippet from Elaine concerned a person Elaine has had a hand in befriending a bit. Elaine heard how that person was now befriending someone else in their locality. A chain reaction which is very much part of the kind of compassion that is so uplifting to hear. It’s what Whitby Community’s Compassion Project is about. Building up links, some very temporary for a particular purpose and some longer (or long) term.

Spotted the following on YouTube. Would make a nice project for any lathe enthusiasts in the Men’s Shed.