Do you remember the days when pupils in their penultimate year before their GCSE exams spent a week (sometimes two) in a business or organisation? In the lives of many young people that was a significant step – they were in an adult working environment often for the first time. Well, sometime in the last 20 years since Shedder Graham’s sons did their bit, such work experience ceased.

Graham  has had a hankering to do something for Whitby youth for a few years and developed an idea called Simulated Work Experience. He thought it might add variety to what was going on. It was then he discovered work experience is no longer mandatory nor offered.

Time went by and the Sheds were developed. However, the idea of something for youth stayed alive and eventually the UK Men’s Shed Association was contacted, asking whether any Sheds had worked with youngsters. By (amazing) coincidence, Claire Shelton of UKMSA had just met an organisation called Volunteer It Yourself. They work with secondary schools and groups of NEETS (Not in Education, Employment or Training) in various parts of the country but not the North East or our region.

At the same time, Graham met Ian Bloor, Deputy Head at Eskdale School, at the installation of Rev. Capt. Malcolm Jackson as incumbent in the Mulgrave district. We were in an overflow under the bell tower in Lythe Church. You may imagine that Graham shared with Ian the vision to engage with young people.

Schools have something in common with care homes. These days both types of institution want to get  “residents” out into the community (time and supervision permitting).

However, a practical project was needed on which pupils would work. The Whitby Sheds use Eskmouth Scout Hut and relationships with the Scouts there have developed well. There is also a Scout Hut in Sleights with plans to have some external  works done there. This was offered by the Scouts as a suggestion. 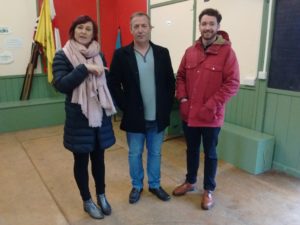 Following a Skype discussion between WAS, Eskdale School and VIY (located in Manchester), there was  a site meeting at the Sleights Hut (with VIY travelling from Manchester and Liverpool).

Ideas were fleshed out and it was agreed to jointly prepare a document presenting the project proposal by mid March.

Safeguarding measures and insurances are both in place within the organisations involved. 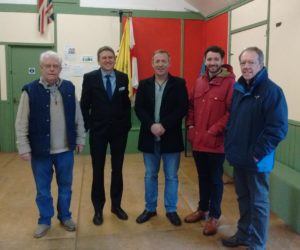 This is an exciting opportunity which the UK Men’s Sheds Association want to share in due course with their members. As things firm up, there will be a page on this web site following progress. Likewise very probably through Whitby Scouts and Eskdale School (and the hopefully the Whitby Gazette).