Home General News Up the Amazon, without a paddle

Up the Amazon, without a paddle

This is Celson Lima. He is from Santarem on the Amazon  River. He was born there and has returned finally after working in Europe and USA.

Graham met him in France 20 years ago and there has been a working relationship and (more importantly) a friendship down the years. Why? The simple fact is that Celson, these days a professor, researcher and influencer (if there is such a word), became a trusted friend, and both helped each other at a personal level. Mates at a distance. 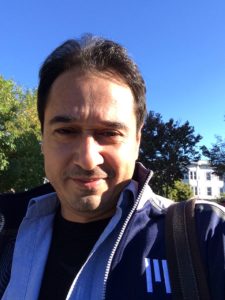 He is an innovator and (rather like our Shedder Lance) he is a natural at many things and delights in bringing people on. Inspiring them, In recent years Celson has specialised in the field of “applied” education. Trying to bridge between schools (some “jungle” schools) and higher education. He wants to inspire children by equipping them with some of the starter tools of being inquisitive. Discovery about things hands on.

Celson was an influence on thinking about Kidz Making Good. Essentially we have similar aims. He was/is part of the Maker Movement that finds expressions world wide. Moving out of desks to do. He is now at the regional and national strategy end of stimulating young women and young men into engineering of all types, including virtual.

Engineers make. Engineers create. These are skills needed in any country to design and develop what we are surrounded by and use day to day.

Why introduce him now?

Well, he Skyped Graham to tell him there was a new DVD of his music. They chatted and updated on what they were each doing  and he would like to Skype this autumn with the Sleights Youth Shed when it is underway. He has followed with interest the Shed evolution in our area.

Graham asked Celson to put into words what he saw his mission was – the direction in which he is striving to benefit education and industry in Brazil.

“We offer different levels of education, starting with the kids and finishing with adults in the university level.

There needs to be liaison between the two extremes, with bridges allowing the exchange of knowledge and experience between them in both directions and at primary and secondary levels. Influencing teaching methods and influencing research directions for better tools to share creativity.

We want to develop a new generation of engineers who are socially responsible and with the mindset of truly being transformers. Able to create positive impact and transform their host situations, their communities, their businesses and the quality of life.

To do that we must work with others seeing the same needs in their countries, worldwide. And we do.