The press release by NYCC about the Penny Farthing taking shape has gone a wee bit viral! 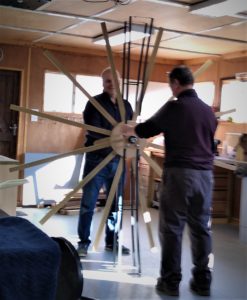 It features in this week’s Whitby Gazette as part of NYCC report. You will see Staithes and BayThorpe Shedders in it, including Brian Holliday turning some wood!

The press release went out quite widely and Look North wishes to film bike action in the near future and the Northern Echo is using the “object” in a piece this weekend – part of a regular weekend series on unusual items. We could supply a few Shedders for that.

We are busy catching up this morning (Elaine is at least!) because the piece is popping up elsewhere including on Yorkshire Coast Radio’s web-site.

Here is the link to that:-  Yorkshire Coast Radio

It is also on various facebook sites including The Bay. 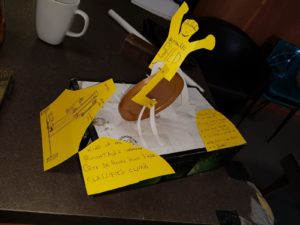 Ian Wallis is the genius and driver behind the idea, but he has some very willing mates amongst the Shedders lending their skills to it also. The latest news is that they may have secured the torso of a mannequin as the basis of the cyclist perched on top of The Big Wheel!

Then the article prepared by Emily Flanagan of NYCC for a feature in the Northern Echo this weekend.

Object of the Week

This handmade prototype – quickly fashioned from a cardboard box, baby milk lid and plenty of tape – is the start of a community project which is bringing people together.

For today’s Object of the Week, we are taking a look at a handmade model – quickly put together as inspiration hit its designer, Ian Wallis, to create a moving sculpture featuring a cyclist on a pennyfarthing bicycle. The joyful sculpture will sit along part of the Tour de Yorkshire route as it passes along the North Yorkshire coast this spring.

Ian Wallis is a member of Baythorpe Men’s Sheds project at Robin Hood’s Bay, where fellow “Shedders” are already working on creating their automaton from their base in the former railway station building in the carpark.

An avid Tour de France fan, Ian, who follows every up and down of the international race intensely over each summer, makes sure he gets involved in the Tour de Yorkshire as an enthusiastic supporter.

He put together the small-scale model after North Yorkshire County Council approached communities to encourage them to come together and celebrate the Tour de Yorkshire. He came up with the idea of creating a moving sculpture with rotating parts which the local community could interact with, and which will also hopefully be picked up by the cameras when the famous cycle race whizzes past.

The final sculpture will be approximately 14ft high, with a rotating wooden wheel and a trimphant wooden cyclist sat on top. It will be in place in time for the race’s arrival in the region on April 30, when Stage One of the Men’s Race follows the Yorkshire Coast, after setting off from Beverley, passing through Filey, Whitby, Fylingthorpe and Staithes before finishing in Redcar, the most northerly point the race has reached.

The sheds initiative provides a space for people to come together to work on projects, share skills and enjoy each other’s company. By doing so it combats social isolation and promotes inclusion.

Whitby Area Sheds has received encouraging support from North Yorkshire County Council’s Stronger Communities team, which supports communities to help themselves and take greater control of their own wellbeing and is also encouraging communities to come together and mark the race.

Visiting the Men’s Sheds project in Staithes, North Yorkshire County Council Chairman Cllr Jim Clark said: “I think this is a super project and that’s why I’m here – to give it some support. I think it’s important that communities throughout North Yorkshire are able to get together and showcase the county.

“When it’s shown on TV people can see what a great place this is and what great communities we have here.”

Graham Storer, an ambassador for the UK Shed network, said: “We had a very positive response from the Sheds when we put the idea of a Tour de Yorkshire project to them.

“The Baythorpe Shed has made an absolutely incredible model and are planning on creating a very exuberant cyclist on a penny-farthing. It will be a moving model – an automaton – and I think it’s going to be very joyful.”

Graham – Good to see your good news at https://www.yorkshirecoastradio.com/news/local-news/3052515/whitby-shedders-start-on-tour-de-yorkshire-art/

I hope you’re well – Congratulations on progress and press coverage ! (Good to see you got the UKMSA Ambassador reference included)

See my (not really thought through) suggestions for Tour de Yorkshire artwork – I figure you would need to get donations of large pieces of wood – Paint them black and lay them on a large light coloured groundsheet so the helicopter can film it !

Re your website – I’m sorry – I’ve not watched the “Peep into SAMS” before  – It is really outstanding, a brilliant Shed video – Well done to you and all who took part  ! ( https://whitbysheds.co.uk/peep-into-sams/ )

Best wishes to all the Whitby Area and Staithes Area Shedders