Home General News This, That & the Other in Whitby Area Sheds

This, That & the Other in Whitby Area Sheds

Starting with the Other.

Shedder Graham is now a resident in Norton-on-Tees and busy on DIY doing everything from installing curtain track and blinds to adding some additional double sockets in the house and 7 in the garage (yes, for his own Shed!). There’s a summerhouse going up and soon paving, a stone circle, railway sleeper retaining walls, a pergola, with Aussie sail canopy and a water feature symbolic of a water trickling  in a dry creek (Aussie style again).

Here is the plan drawn to scale with PowerPoint and a photo of the log summerhouse on day 1 of the build. 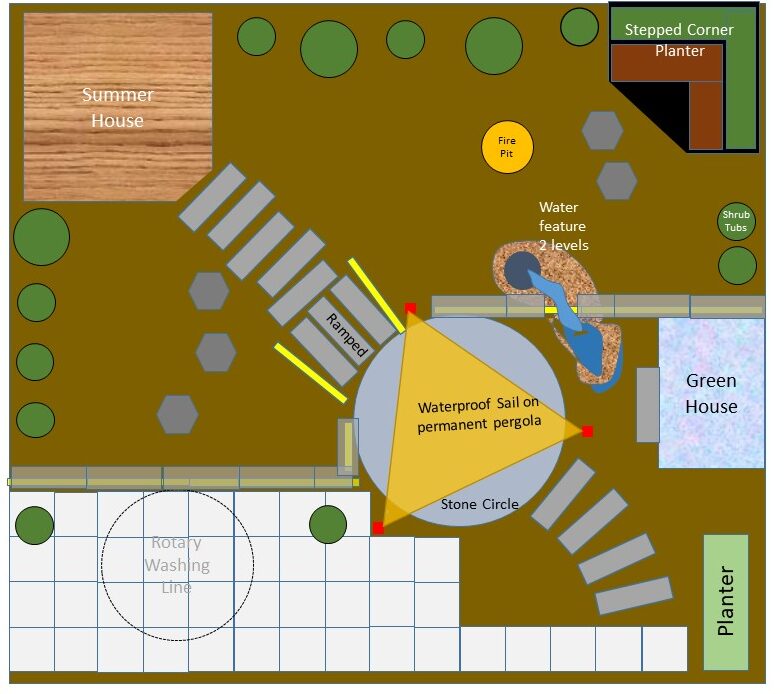 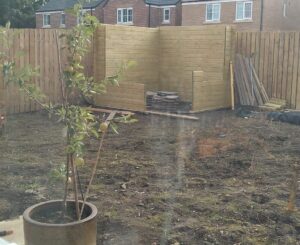 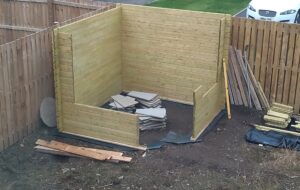 Graham is still involved with Whitby Area Sheds and is joining them in the flesh as opportunity arises.

Here is a cartoon view of Graham’s moving in day. Very close to the truth and it lingers on. 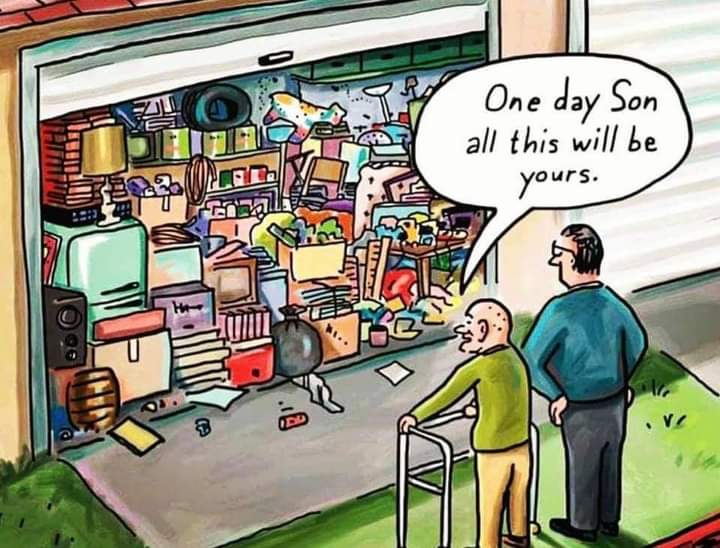 This being the three Sheds.

As Covid-19 restrictions eased in June, the Sheds restarted, with a degree of hesitancy. 15 months missing in the life of the Sheds (save for Zoom Talking Sheds at the Kitchen Table) was a challenging void for the Shed but also some of the Shedders whose circumstances had changed.

HOWEVER, two months on now,  the Sheds are buzzing again – including Staithes whose future was very much in doubt but a turn of events with the premises has hopefully changed that.

Whitby Shed began meeting again on a once a week basis and is becoming twice a week again in September.  There’s a growing women’s contingent, some doing woodork and others creative work with materials and wood carving. 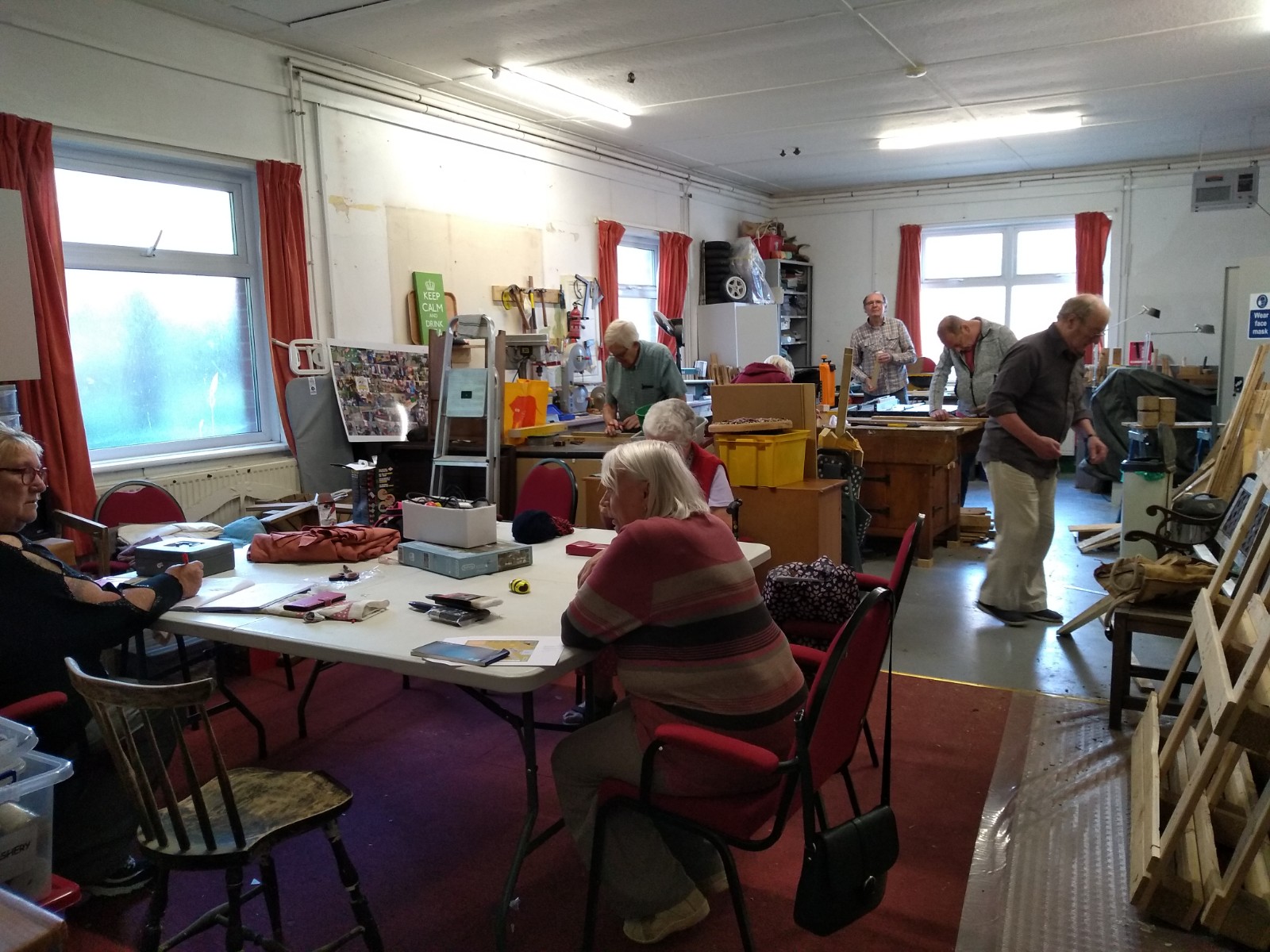 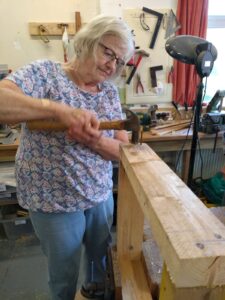 Betty nailing her planter frame together 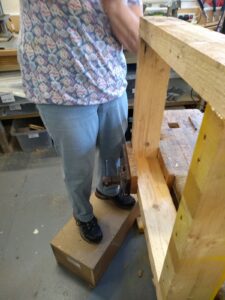 What the camera does not normally see! 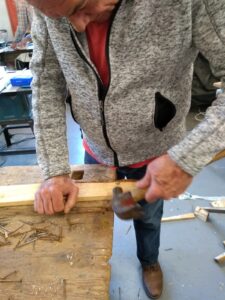 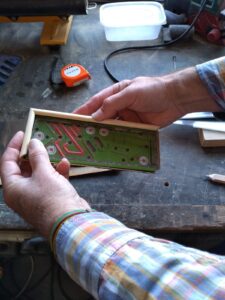 Rob repairing an old ball bearing puzzle. Made in Bavaria in fact. 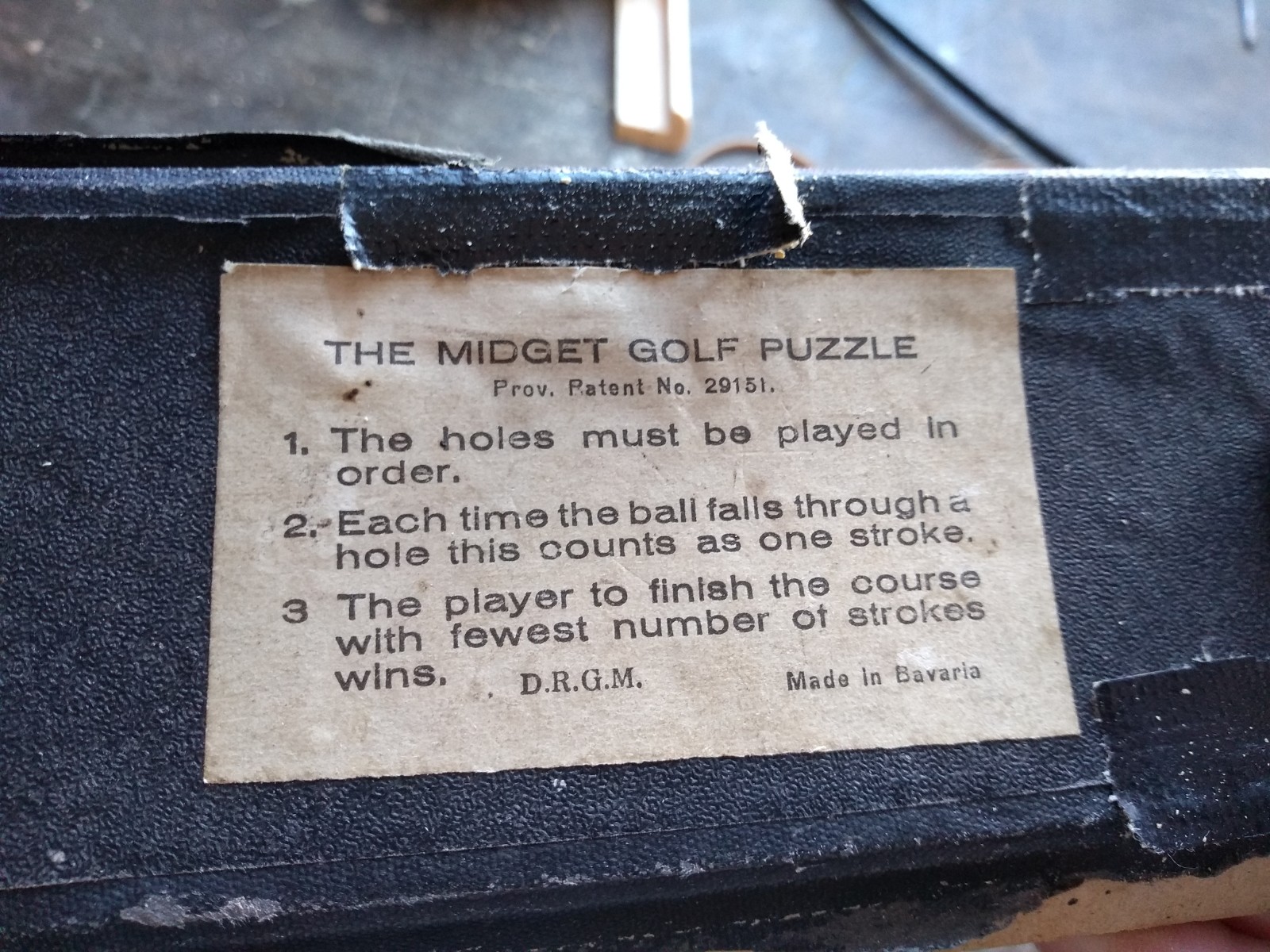 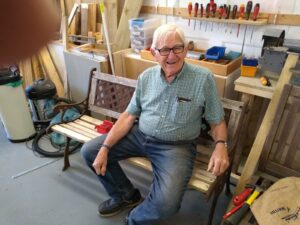 Ted resting on his laurels on a bench he is refurbishing for she who must be obeyed. 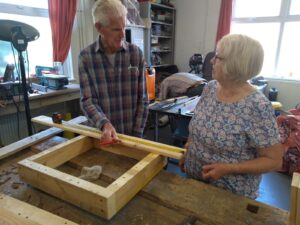 Tony is Betty’s guide and mentor. Notice the look she is giving him.

Some thinkers and dreamers at this Shed. But they are putting the planning into practice now.  They are taking on the task of clearing the brambles on the sports club maintenance equipment area adjacent to the Shed. 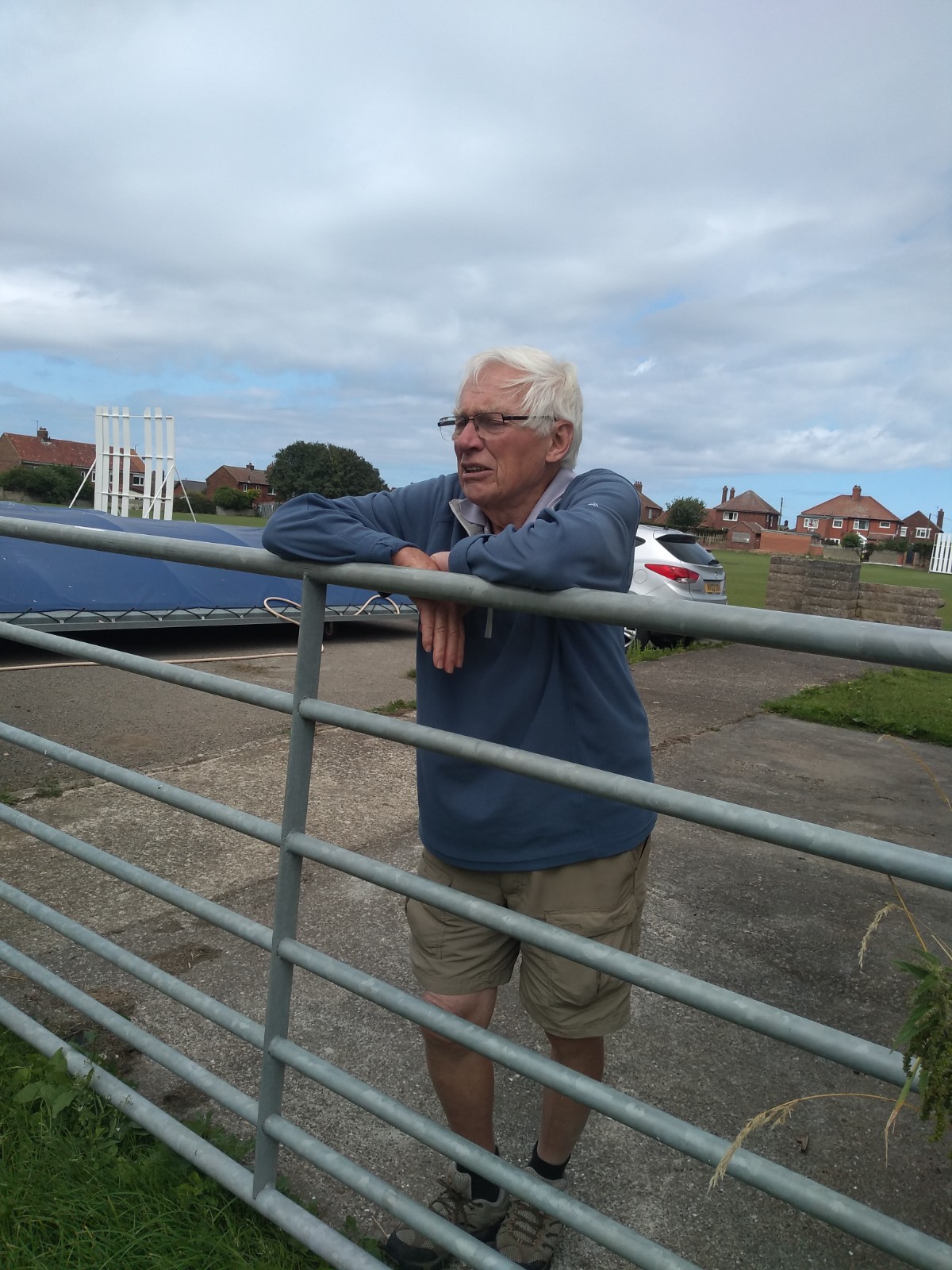 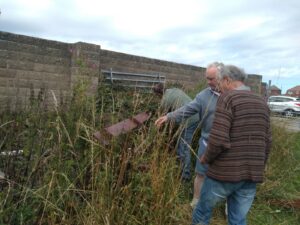 The team go exploring, discovering a disused bowls green! In the past it seems the area has been used for several interests including a play area. 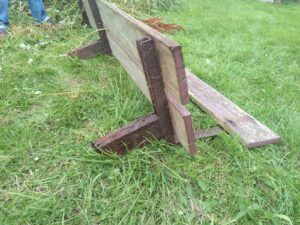 A bench was found in the undergrowth. Hardwood planks no rot. Steel legs rusted through. A Shed project? 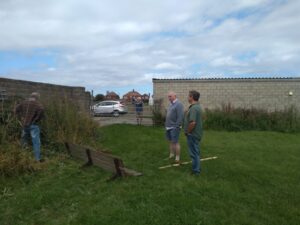 Here is a report on goings on last Thursday from Shedder Malcolm. A visitor came that day too.

Just back from Harrogate. Further to my email of this morning re the Swanwick Men’s Shed, their website below well worth a look.

Their Derbyshire Men’s Shed Ambassador from the Swanwick Shed, as he describes himself, popped in to see us yesterday. For the life of me, I can’t remember his name, Richard possibly. Brian, Phil or Martyn may remember it. He is/was taking a break in Port Mulgrave. If anyone remembers his name, please let me know.

As you can see from the website, the Swanwick Shed seems to be well set up, lots of projects. One project/person he mentioned in particular was making garden trellises, an elderly lady in the Shed left to her own devices on a chop saw with a staple/nail gun to knock them out. I noticed a photo on their site which could be her and the trellis ( second link below ).

Their ‘Flyer’ also below.

Next time I’m heading south to visit relatives in Cambridge, worth investigating as a stop off for a cuppa. Swanwick is about halfway, just off the M1.

We made a decent start on clearing the brambles, about a third to half cut down. A bit of a daunting task but, bit at a time.

The Shed has had a busy summer earning some income by helping to operate temporary car parking on private land close by the Shed. Robin Hood’s Bay, like most other coastal villages and towns on the North Yorkshire Coast have insufficient parking to meet demand. Tourism is  vital to the region’s economy (and it has been a difficult two years because of Covid-19) so the community pulls together to provide some “pop up” parking on busy days using land belonging to local services when not in use.

It has been quite a commitment for some of the Shed members doing what is almost a seven day role but every little helps.

Now That – news from other Sheds and the Kitchen Table

News of Scarborough MATES Shed and the opening of their new premises . . . .


We first met Ian Haile and his colleagues 4 or more years ago. They wanted a Shed in Scarborough but it was proving difficult. They came to Sleights Shed in Littlebeck for advice and gave moral support in the ongoing development of the Shed. They used a downstairs room in St Andrew’s Church but it had to be a get out and pack up arrangement because of other usage of the space. They spent the past 3 years searching for more permanent premises (hopes were raised but dashed several times). Now they have the grand opening of premises that have plenty of potential. On 8th September.