Home General News This, That and the Other

This, That and the Other

Following on from the last blog regarding “messy people”, organisations can be messy too. Thankfully!

Littlebeck Chapel (the host of SAMS) had its Chapel Anniversary (opened in 1890 so figure the age out!). It had a real departure from the norm that I’ve not experienced before (even in larger churches). It did the equivalent of letting its hair down by having a meal open to locals and SAMS Shedders in the Chapel itself and rearranging the pews to accommodate tables around which to eat and talk about past, present and future. 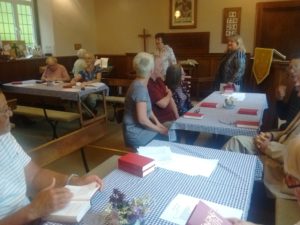 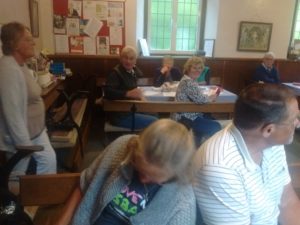 Littlebeck would not be Littlebeck this time of year without walkers. In came Margie and Bob from New York State to the celebration on the penultimate day of their epic journey. Their boots were removed at the door:-) Margie sported a T-shirt enblazened “I love my husband”. That might have simply been a matter of fact statement but in fact it transpired it was their ruby wedding that very day.

Our Shedder Paula was there too moving between tables to discover strangers to her and to generally disturb the peace. Roger, Mick and Sheila too. Plus another Bob, not our one or an American cousin but the husband of the lady dancing on the organ pedals for a short service by Rev. Jane Carter.

Bob recognised Graham from a visit he had made to the Whitby Shed a month before to test it out. Graham did not remember Bob which is par for the course. Bob made a golden comment when he said that he’d not been too interested in the practical stuff he’d seen but he noticed and remembered the smiles on faces.

Bob has a wicked sense of humour which matches our Shedder Geoff’s. They could be book ends of dry humour. Aren’t people wonderfully unique:-)

Tim Bradley (the man wanting to do a vehicle Shed in Scarborough) sent a couple of photos and a message. Tim has his ups and downs health wise but is of stalwart stuff. He had his refurbished  Volvo out for a spin at the weekend. He is a striver against adversity. 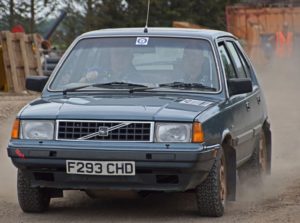 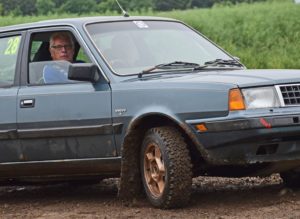 Tim wrote,”Hi,  hope you are all well. Pics  of the result of all the pain, negative thoughts and hours of watching the odd spider crawl across the bedroom ceiling ????.”

We’ve just submitted a nomination for SAMS to North Yorkshire County Councils Community Awards 2018. In the Best Group category. Eskmouth Scouts has done the same but in the category of Best Project for the activities at the Sleights Scout Hut where we are working with them and Eskdale School on young people’s work experience (orchestrated by the Volunteer It Yourself organisation which works with schools and NEETS). If they get first prize they wish to share it 50:50 with SAMS. We greatly appreciate that offer but they should take their just reward. They are doing the lions’ share of the work which is to also benefit the Sleights Community.

There is no shortage of messy fun!! 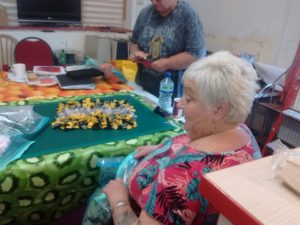 She Shed Linda’s pride at completing her first snuffle mat. She did a second too today 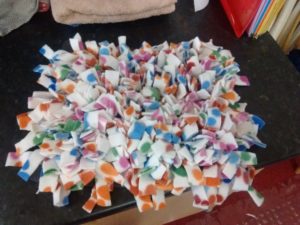 She Shed Marie completed this large mat today also. Production is now ramping up and items are available to purchase. 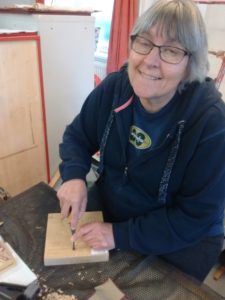 A slightly embarrassing picture of Hannah (look at my eyes she says!!) taking on wood carving and applying herself well. 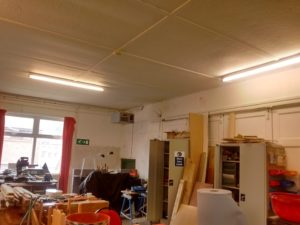 Graham and new Shedder Tony (not pictured) completed the work Shedder Rob helped with the day before. Running power cables in the trunking running around the room at ceiling level. Moving forward.