Theory Into Practice of Compassion (Part 1) 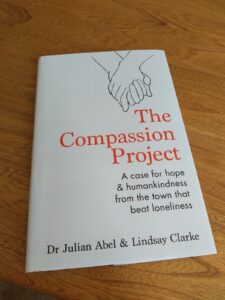 Graham started to read the book on the The Compassion Project on Thursday evening. It is subtitled “A case for hope & humankindness from the town that beat loneliness”. Just in case you stumble on this blog in isolation, the town is Frome, Somerset.

Although Graham knew a lot about Frome’s Project from conversations with Patrick Abrahams of Frome Men’s Shed over the past nearly 2 years and a visit for 3 days in October 2019 (when he was fortunate to meet Dr Helen Kingston and the main worker Jenny Hartnoll) the book’s early chapters opened his eyes to important “accidents”. Unusually perhaps, the book first introduces the story of how the books two authors met and how they began to see a common vision that was born out of an experience that required a lot of, yes, compassion.

The other accident was how Jenny Hartnoll, a community worker ex-Harlesden, London, who moved to Frome. She knew of the benefits of  community collaboration and set to in her own time to research and list all that was available for people in Frome to benefit from.   Jenny met Dr Helen Kingston on a rather chaotic, snowy evening where Jenny arrived late to introduce her work to the Partners at the Frome Medical Practice. Helen was there, quietly sitting in the background. Soon after, a job at the practice was advertised which Jenny saw but did not apply for – at first. She applied after the closing date but was accepted for interview.

Jenny received a rapid yes for the post! It had been written around her in fact and was designed to attract her and Helen was disappointed when she did not apply. See how things can often work out! Accidents do happen.

So, two teams really. The authors were effectively the evaluators of the project.

The next section dealt with the subject of compassion. We are familiar with sympathy (feeling sorry for another), empathy (understanding the feelings of the other) but compassion is shown when practical steps are taken to help the other practically.

That’s as far as Graham has got. He’s not into what happened yet!

But the vision was expressed by Dr. Helen Kingston”

“We wanted to create a community where people are supported to be creative, active and resourceful in response to their own and each other’s unique and shared needs, with easily accessible integrated care and support available to all.” This was the vision in 2013 and the vision that others shared in.

So, compassion into practice now in Whitby District.  There has been a remarkable pulling together in our community to help each other, and thankfully that is not unique to Whitby! It has happened in streets, villages, towns and cities by organisations AND individuals.

Graham strongly supports the vision for forming Whitby Community Alliance (introduced in the preceding blog). So far, 14 organisations have been interested and most have taken an active part in discussion to shape the early steps of WCA according to the principles set out in the draft mission statement also in the preceding blog.

We, Whitby District Sheds, are involved – through Graham, but in discussion by several Shedders.

An example of compassion in the past 48 hours will illustrate how compassion can be a powerful channel.

Debbie Swales leads the Revival North Yorkshire project that began as Memory Lane Lunches that one or two of our Sheeders (and partners) attended. Coronavirus has resulted in Debbie and about 20 volunteers reconfigured its work in lockdown (no social lunches, of course). Food supply to those formally shielded or isolated or not able to access food for some other reason has been the area that Debbie has moved into and it has revealed massive needs – beyond food really.

In one rural area Debbie discovered that one of the couples receiving food had another practical need. Cutting the grass. They had quite serious health concerns and grass cutting was now beyond them.

Debbie could have ignored that need. She has more than enough to do with food access and food supply. BUT Debbie is someone of heart and compassion (Graham has seen that even before Covid). Debbie did some research but also contacted Graham.

Graham could say that Sheds don’t cut grass but he accepted Debbie’s compassion as a subcontract to explore. A couple of phone calls and 36 hours later Graham and BrianH found their way to the house to size up the lawn.

Welcomed warmly at the house by the couple, we saw the lawn but we also learned something about the couple too. The gentleman might benefit from the camaraderie of a Shed and the banter – something he misses from the past. He works with wood in his garage. 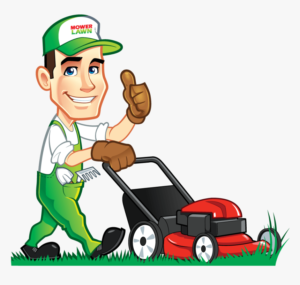 It did not take much thinking for Graham and Brian to want to help, maybe with one or two other Shedders.

COMPASSION is there in several guises. One that Graham greatly appreciated was Brian’s compassion. Brian could have said many thanks for taking me with you for a walk to the house, but no thanks for dragging me into this. I cannot read Brian’s mind, but I think the circumstances of the need were apparent to Brian quite separately from Graham.

This is what Whitby Community Alliance is about at the grass roots (hope you like the pun). It is about the voluntary sector Alliance partners helping each other organisation to organisation and reaching out to agencies, but ULTIMATELY it is about the caring that can be given to individual people and families through a network of support. of which the story above is an example.

Now, using Brian as the target of favourable comments (we are used to sarcastic comments in Sheds as part of the banter), the question is whether Brian has learnt about compassion through the Sheds? Graham’s belief is that it does happen to a surprising number of Shedders. We start to care about each other – we often say Sheds are families.

However, the story above shows that we sometimes need OPPORTUNITY to be compassionate. The person who contacted Debbie Swales about the need; Debbie Swales handling and passing “the ball” to Sheds; Graham making the calls and arranging a visit to the couple; and Brian agreeing to be taken along on the visit and sharing in seeing for himself the need WERE ALL LINKS IN THE CHAIN OF SATISFYING A NEED THROUGH COMPASSIONATE COLLABORATION. That is what the Frome Project achieved very deeply as it evolved over some years. It’s “doing” compassion not talking about it that makes the difference and we need opportunities to see how it works.

Our Staithes Colin now in Larpool care home is another story on Thursday.

Colin is now on Zoom successfully at last (though he has been using Messenger. He can now be in touch directly with Staithes Shed and can Zoom in to other Sheds when they are reopened and they are some techi things added in due course to replicate Staithes. 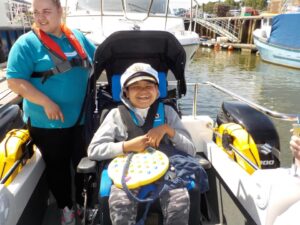 During Colin’s chat with Graham he said he had been contacted by Peter Richardson of WetWheels, the operator of the wheelchair carrying sea craft to spot dolphins, whales the coastline from the sea. It is not operating presently but simply talking about the future hope of taking a trip has opened a new door of experience for Colin when several have closed.

Guess who put Peter on to Colin – it was Debbie through her “new normal” services.

Peter and Debbie are two of the founding members of the dreamy idea that is now crystallizing, as Whitby Community Alliance begins to take shape

Social distancing is a dance form which Brian & Graham are perfecting with a two-metre long rule between them:-). Trying to get ready for potential Shed opening next month ???? 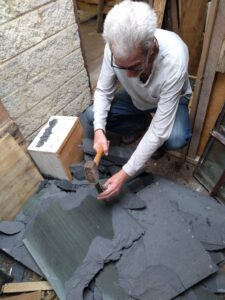 The slate is in manageable pieces now. Tom will use some for sharpening tools. 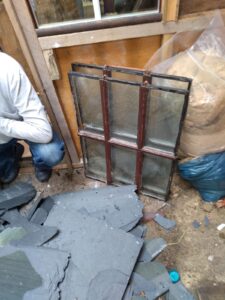 These are some of the glass panes from the door. Like the slate, the door was dead weight to try to move. Time to order some OSB3 boards for a raised floor. 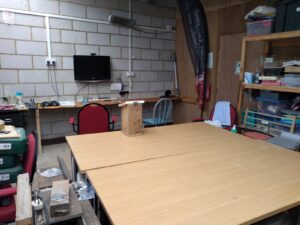 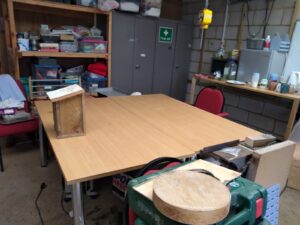 Where was the mess moved to? Don’t ask questions. We did also vacuum the workshop next door. A first stage clean, followed by machine waxing equipment surfaces.

They took apart a 15 panel mahogany framed door and smashed up the last of 5 slate pool table beds. Four others had been sold last year by Brian on ebay and proceeds were passed to the Sports & Social Club.

Two destructive tasks therefore. There was one constructive task was clearing the decks on the pair of tables in the so called clean area! Slowly getting there. Still can’t see the trees for the wood though 🙂

Links to blogs related to Frome

The Town that Cured Loneliness

Theory into Practice of Compassion (Part 1)