We now reach the heart of the “into Practice” bit of the Frome Project story.

The early chapters dealt with the prior stories of some key people – why they fitted with their skill sets. Also, what the nature of compassion is and its centrality to human life – particularly when the chips are down for individuals. It is individuals who generate compassion – those needing it and those giving it. Organisations come into play when we see the same needs in different people and we need to put a bit of structure and process into it without losing the compassion. It is the case with Whitby and district and the organisations around the new Whitby Community Alliance and other organisations yet to hear of it but already contributing to it.

Chapter 5 deals with Compassion in Action. Examples from Frome of thinking and planning they did and measures they took. Whitby could do the same btw and The Alliance is on the way to doing that in fact without fully realising it! The importance of Frome is not that it is a textbook to be followed but it is a statement of what CAN be done. Others are on a similar path (including Guernsey we learnt working on elements of it). It is not about precisely what is done but more about how it is done – the spirit of trust and collaboration that extend up and down the apparent power ladder (authorities<>individual efforts). Top and bottom are both important – one provides resources and the other the grass roots commitment.

Back to the book.

“The philosophy and practice of compassionate community development turns the the increasingly unsatisfactory method of managing human affairs on its head.” It works on two assumptions:-

We see that working to a considerable degree in our Whitby Sheds but also in the Shed movement more widely. It is a can do atmosphere even when individuals feel they are down! Together we can. No real hierarchy and everyone having their place in it. We come across people in this area who have amazing trade skills and if we were to be cast away on the proverbial desert island they are the people I’d want to be beside!!

The formal name of the project within the NHS structure is “Health Connections Mendip”. This is their mission statement. 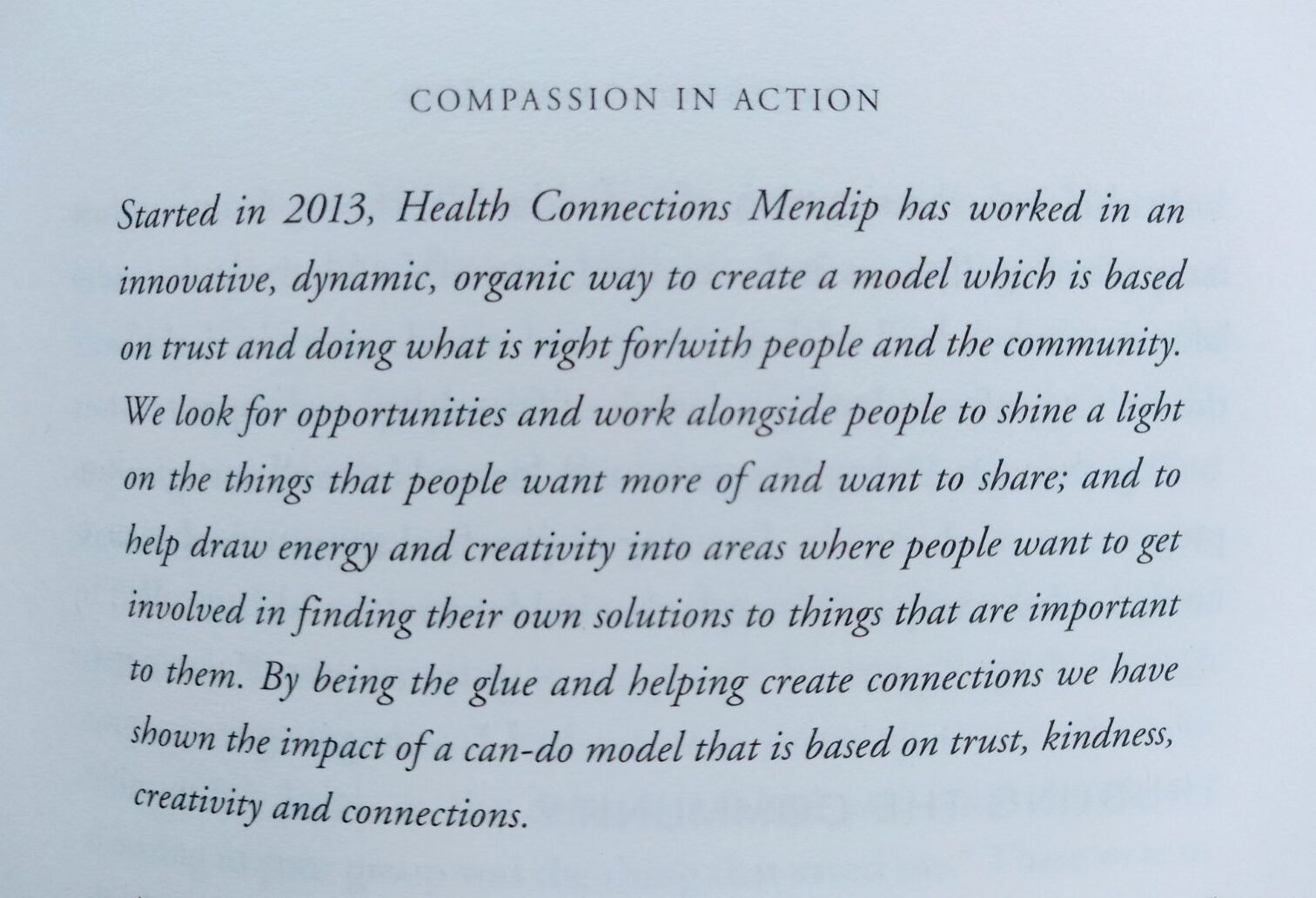 Surely that fits both Sheds and Whitby Community Alliance like a pair of gloves! The “emergency ambulance admissions measurement demonstrated that such an approach (a way of thinking) is capable of improving the health and welfare (wellbeing) of individuals.

How was it done? There were 3 key measures followed that are not that extraordinary

Whitby? The Sheds? The Alliance?

Number 1. There are directories in various hands already. They will need localising for Whitby below the “Scarborough or North Yorkshire” giant landscape:-). The first point is done bar the refinement for rapid enquiry. In Frome it sits with other systems on the doctors’ desks.

Number 2. is done individually really (e.g. by Sheds about Sheds) but it needs to be holistic. The account of being joined up needs to be written. It is there but the community needs to be able to visualise it and see it. Cue web-sites, social media sites and carefully arranged events (yes, even video based). Get it out there what is happening and indeed what has happened already.

Number 3. Is actions in their conception and infancy. The Sleights Area Shed needed help nearly 5 years ago and now it have evolved to 4 sites (and lockdown!-). All the Whitby Community Alliance members started small too. There were foster parents like Coast & Vale CA and Community First Yorkshire to guide and do “a bit” but to try to create community ownership and independence, not dependency.

Key to Frome Project’s development was Jenny  Hartnoll and her experience of community building at street level in Harlesden, London. She learnt her trade there. She came to Frome with no job but began to be active nevertheless as a way to build the sense of belonging. That investment came to the notice of Frome Medical Centre And the Doctors. A job rapidly followed – more a partnership – and that created a very open atmosphere for inclusion of all sorts of activities and people. Trust too

“The essential first step in harnessing the power of compassion is to see what needs to be done and then to get on and do it.”

Oh so true as we know in Sheds.

What was there in Frome? What  “participatory community developments” were there. Voluntary efforts by the community with some get up and go and sideways connections? Things that developed organically (as Totally Socially encouraged in Whitby).

We know from Sheds that there is the idea to do something needed but also the right people to do it.

Here are a few examples from Frome:- 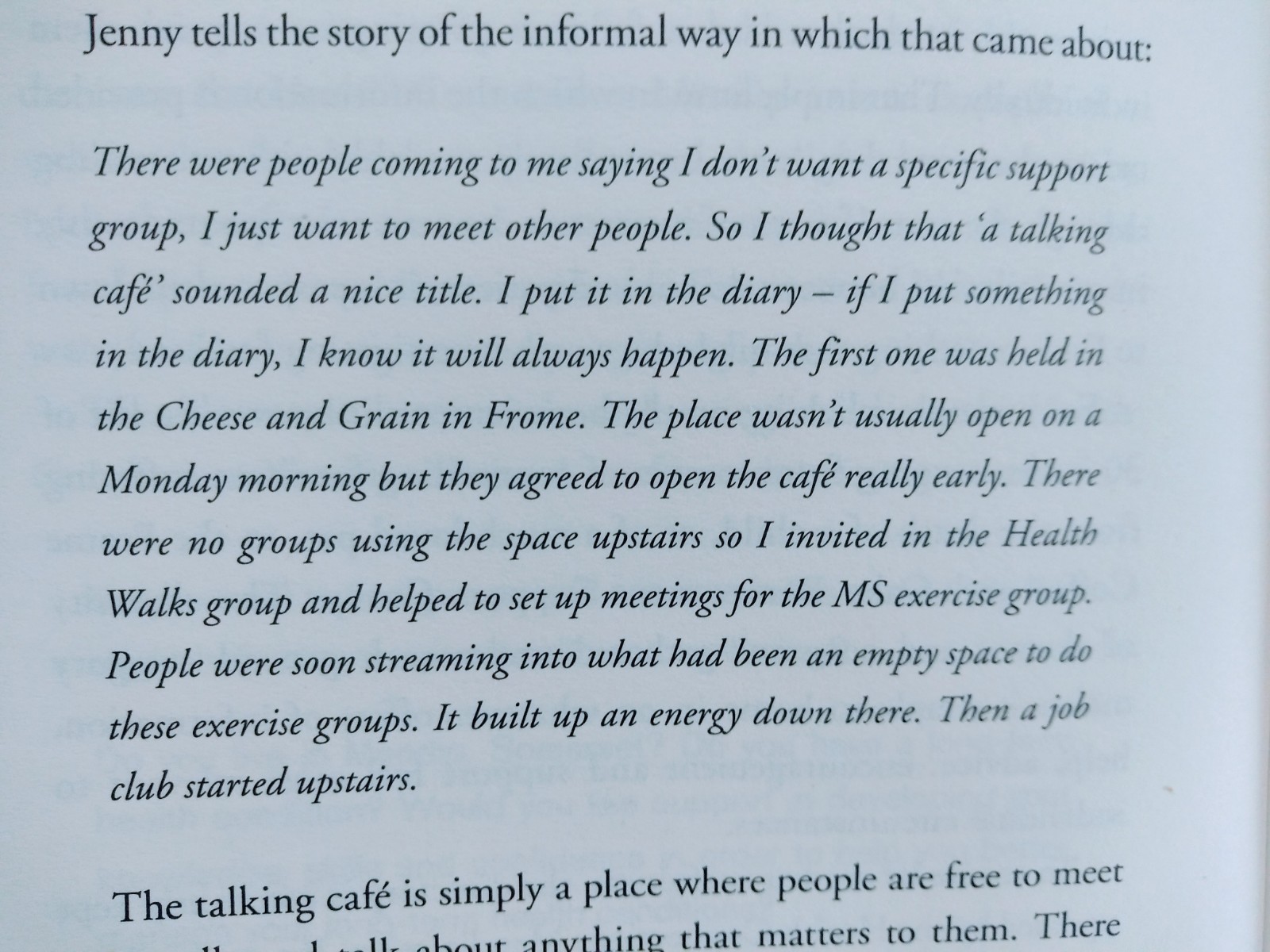 Through coming to the informal Talking Cafe and participating in conversations that arose spontaneously people made connections with other activities in Frome.

Patrick Abrahams, the Shed founder in Frome, attends the cafe sessions quite regularly. 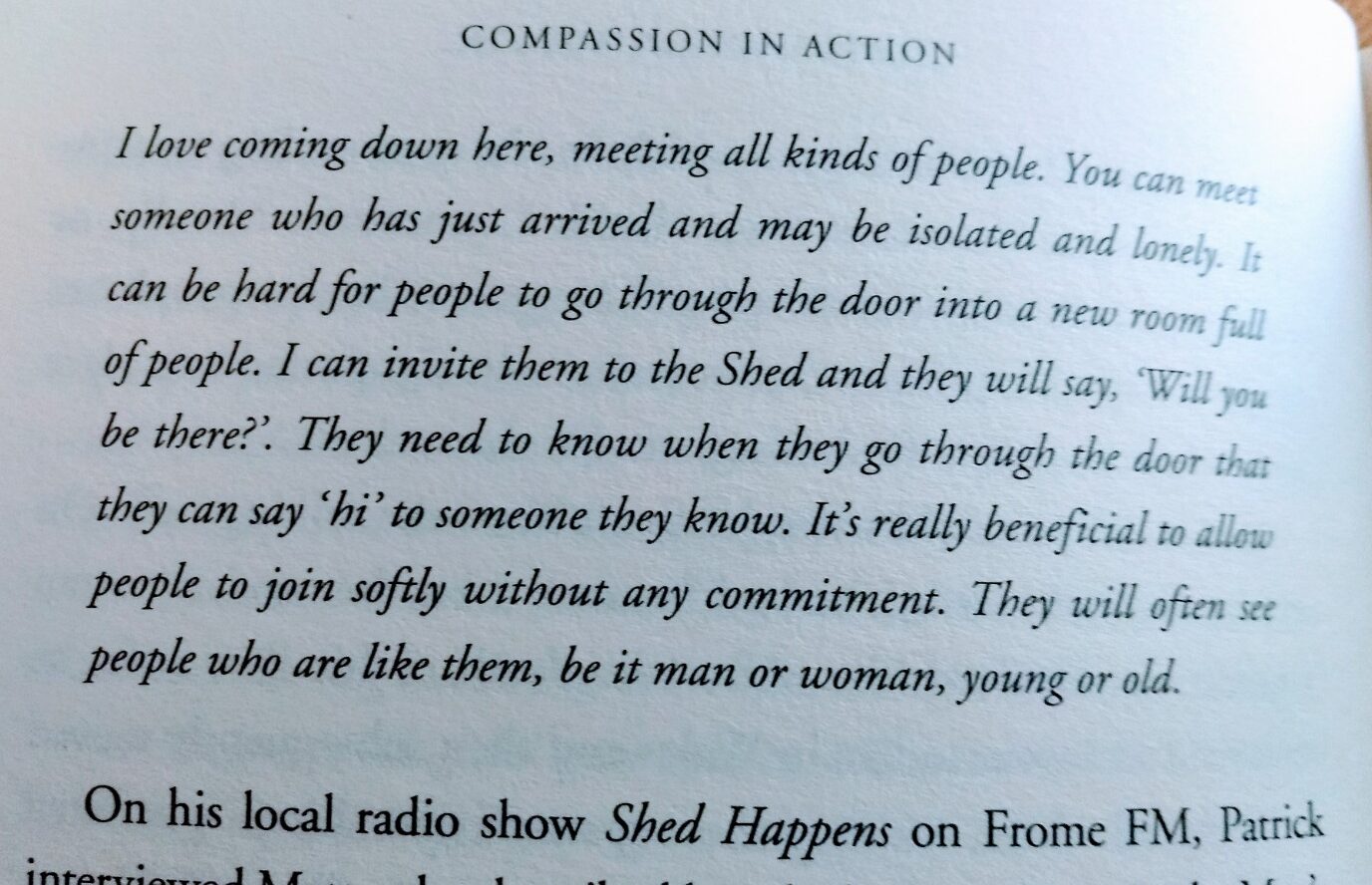 You get the hint at the bottom that Patrick also runs a weekly show for Sheds on Radio Frome. Another promotional tool.

The next blog will introduce the concept of the Community Connectors and the Health Connectors. Embryonic of the Social Prescribing now being brought in and the Link Workers working from the GP surgeries in Whitby district.

And then there is a bold statement that although there was a lot of thought that went into the the project, the next stages HAD NO PLAN. It was working with what was presented in creative ways. The Frome Project was populated by many people with ideas. I’m sure that some did not work out, but others did and some of those which didn’t were reshaped to succeed. We know that happens. What Whitby Community Alliance is doing is to provide a very flexible framework that will allow and encourage others to join in quite soon and people we don’t know of too!  Opportunity knocks.

So, await the next instalment which may be the last possibly. The rest of the journey is one we have to walk on our own in Whitby but not alone from the influence of others down a similar track:-)

On a different theme 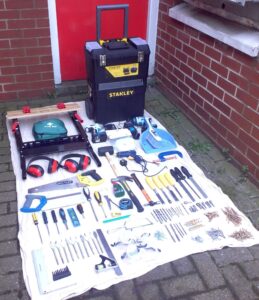 Here are photos of the “pop-up” Shed organised by Ed Horwood, the Reparation and Volunteer Development Officer for Youth Justice in our region. Ed came to Littlebeck nearly two years ago and discussed helping a young man make two bird boxes as agreed reparation for a victim. A remarkable experience to be a part of. Very compassionate in a sense.

Graham’s in a second Guernsey live videocast on Wednesday on the theme of Sheds and Young People. The main focus will be on a young man in the South of England who has wanted for a while to found an all-age Shed, intergenerational. We have been involved (with Scouts through Janine Pemberton) on workshops for older primary school age called Kidz Making Good. Plus a Youth Shed in

Sleights that began to shape nicely before lockdown came.

Ed Horwood’s innovative introduction of a 1:1 Shed as part of Youth Justice and restorative justice too, will I hope be somet 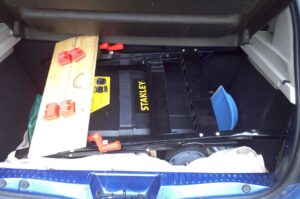 hing that we will also touch upon in the programme.

Innovation in large organisations is very difficult but Ed worked hard and carefully to bring the mobile Shed about (now not operating, of course!) (B&Q, Whitby Shed, the Sisters at Sneaton Priory and a former Councillor all helped it!

It is amazing that Frome took off as a project within the NHS!! There were I think special reasons for it that the book reveals  quite a lot about. It’s called right people, right place, right time!