People’s Health Trust put out a press release about Staithes Shed on Wednesday this week. With a photo of Brian, Maggie (and daughter Lisa) and Graham using Zoom video conferencing.

This was picked up the following day by Mirror Online and incorporated in a thread about the use of conferencing which has suddenly become popular, for obvious reasons.

Patrick Abrahams of Frome Shed (and Shed broadcaster on Frome 96.6FM) has a very effective net to catch such news items and emailed us.

Credit should be given to Sophia Walker (press officer) and Charlotte Gal who put the finger on us! Charlotte is our grant/project officer.

The article is copied below or click on the link in the email to see what others are up to with Zoom, WharsApp, Skype and FaceTime. It’s simply keeping in touch.

Hi Graham – Great job getting in to the press today

Well done to all concerned – Thanks for the “Shed Happens” mention.

Men and women of all ages can access the Men’s Shed and She-Shed projects which involve bringing people together for a range of activities that involve conversation, craft and mutual support as well as more unusual activities such as wood turning, use of power equipment, novel crafts and outward community engagement .

Staithes Shed had to close on 16th March but members have been keeping in touch via live video chats and some have even made their sheds available to help the community in any safe way, including erecting a cover at a surgery to protect those collecting prescriptions through a side window.

Project Co-Ordinator Graham Storer said: “The essence of Sheds is not what is made or done. It is the comradeship and family feel. That must/will continue mainly through our online presence and electronically. We encourage our Shedders to keep on doing what they can at home (birdboxes was a recent call on us) and wave to other locked down souls across the street! Sheds are people.”

The UK Men’s Shed Association has also started a weekly two hour programme on Wednesdays 10am – noon called “Shed Happens” using Frome 96.6FM which fans can access via the internet.

Why bother with press releases?

Sheds are good news (good wellbeing news) for most Shedders. We have seen transformations. Grants (such as the one we received from People’s Health Trust) are an investment from the general public through the Health Lottery and we owe it to the public to allow some of the good news to be presented by PHT as prominently as they can.

Throughout the 4 years that Sheds in Whitby district have evolved we have always acknowledged and supported our funders. North Yorkshire County Council, ASDA Foundation, Two Ridings Community Foundation and Sirius Minerals Foundation. They and we are investors in people.

Future “Sheds Happen” on Frome Radio (listen via the internet on Wednesdays 10am – noon) will have contributions from Whitby Area Sheds.

Already recorded is a contribution to next Wednesday’s International Edition (with contributions from countries including Iceland, Canada, Ireland and, of course, Australia.

It is a possibility that we will also feature the following week in an edition focussing on Community Involvement.

Letter from BayThorpe by Elaine Marsh

So, here we are, a month after rapidly closing the Sheds and I’m wondering how everyone is filling their time. People I’ve never met, but know about from Graham and I really think, when we’re out of this we all need to get together and celebrate- it’s something we’ve talked about for long enough !!

I decided to focus on our “up” times here, and there have been some! Steve,has actually finished jobs – something rarely achieved in 44 years of marriage. He transformed a tired old static,used as a camp site reception belonging to friends, ready for when they reopen. One Shedder said it looks remarkably Shed like hmmm!

He also built a spuggy terrace, I prefer Roger’s,  but don’t tell Steve! I told him it was too late for this year, but he went ahead anyway,and 2 days later was being investigated by sparrows and blue tits – shows how much I know.

The highlight for me was, after 6 years he’s filled in the gaps between the garden flagstones with a dry sand and cement mix. I’ve spent hours laboriously getting deep rooted weeds from between these and now, in the time I save, I can go around clearing up the mess he leaves behind. I hear his dad’s words from years ago ” he is a good worker, but is very untidy” . Nothing’s changed ! 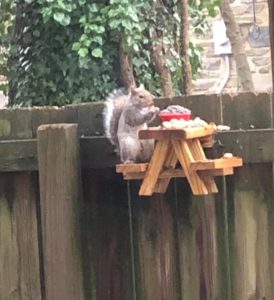 A couple of smiles 🙂

Bay Shedder Olly, saw this pic-nic table and has made one for his garden. The only drawback is he doesn’t have squirrels!!

[Shall we knit him one?]

And finally, I asked my daughter if they’d been out to applaud the NHS for their amazing work.

It seems she had gone with my 8 year granddaughter, Pops, on their daily exercise, turned into their road,  just as everyone started clapping.

Pops walked, red faced, down the long road to home 😂

Shedder Dick Hoyle sent an update from his solitary outpost! 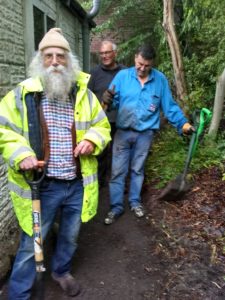 Hi everyone, looks a good idea! How about bat boxes, we have lots of bats in our garden but do not know where they roost. I have a bat box I bought if anyone wants a pattern.

We are both self isolating as we have health issues and are over 70! I know it is hard to believe! I don’t look a day over 100!

We are spending lots of time in the garden in this lovely weather but it is hard work catching up on chores that we didn’t get round to when we were working 7 days a week!

We too are suffering from too much bad news. Is there such a thing as a good news TV channel?

Hi everyone,
Thought as Dick and Elaine have sent updates I’d join in.

Like Steve have been using the time to catch up on tasks at home and Sandra is non stop in the garden. 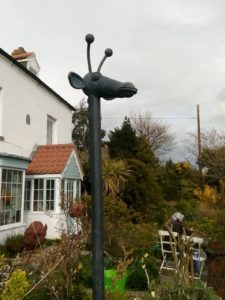 I want to show a photo of a new addition to garden that you can look at when passing. [I can’t imagine we’d miss it!]. You will probably think we’re having a Giraffe!!

If you think we are having a bad time, give a thought to some who are a lot worse off.

I’ve heard of a lingerie shop that has gone bust, a watch maker has called time, the shoe repairers has been soled, the food blender factory has gone into liquidation and the TV aerial shop has called in the receivers!!

I’m confused, Amazon delivered a load of clay which I didn’t order,—- I don’t know what to make of it.
Just been to Aldi, was a bloke buying some paella, pinata and a sombrero, thought to myself Hispanic buying.
And I’ve just noticed a burglar breaking the lock on his own front door. I said what are you doing lad? He said he was working from home!!

I bet you have all had enough by now, just have some sympathy for my grandsons they have  heard all my jokes on numerous occasions! (They’d agree they aren’t funny either! Also feel sympathy for Sandra has she has to hear them numerous times)

Hope you are all keeping well, stay safe, enjoy bumping into you when passing and look forward to us all getting back to the shed , hopefully soon.

Best wishes to all.
Stuart and Sandra
Ps Everyone do pass on to anyone I have forgotten. This has been a long one for me, I need to lie down!!

[It was pretty taxing on the rest of us, Stuart!]


Shedder Danny is the man behind the Dalek  (in fact, the man in the Dalek to give it some direction). Danny and Dal;ek attend events in many places as an attraction for kids and adults.