Launched operationally in February 2016, SAMS was by no means a certainty for success (however that is defined). 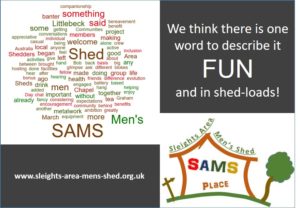 In a back room of a Methodist Chapel at the very bottom of the valley right by an “active” ford, it is idyllic in the summer but in winter the sun (when it is out) hardly penetrates.

What kicked in, however, was what kicks in in  oher Sheds which is the  building of relationship between men who did not know one another whatsoever. They simply bonded and as new people came they were welcomed into the “family”. 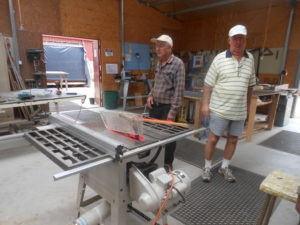 In North Yorkshire there were no Men’s Sheds and Redcar Shed was only a month or two ahead of us. The pattern for the Shed came directly from our Aussie cousins (specifically in Sale, Victoria). Their Sheds are investments by governments and by communities. They are big and have two large areas usually – one being the workshop and the other a mess for gathering in, sometimes used by other voluntary groups.

Littlebeck is nothing like that! It is ‘bijou’ as estate agents would say. Tres bijou! If nothing else, it means the Shedders must literally rub shoulders which is where inclusion begins, of course. We delight in the mixed bag of Shedders we have – from the (genuinely) brilliant with skills to the rank amateur and to those who are losing it a bit. ALL are members of SAMS family, including some women!

Banter is the order of the day, followed by tea and coffee and serious discussion of Brexit (the last bit is a lie!). People drive themselves to do things because of enthusiasm and seeing the results of their labour. So satisfying. It simply does Shedders good (yes, and women . . .).

Watch the video and hear what the men said just 3 months after opening. Yorkshire Coast Homes made this a gift to the Shed and it still is an excellent recruitment tool. Out thanks to Kevin Allen.

He was a star attraction when Coast to Coast walkers passing the door came in for a cuppa and a toilet. Bert had a mischievous twinkle in his eye  but sadly died about 6 months after starting to attend. Bert taught us a lot – how to embrace even the silent ones. There’s always a chink in the armour that lets humour through.

Now, two years on and operating two days a week (Australian Sheds often every day), SAMS has too many Shedders! Hence the new Whitby Men’s Shed opened at the beginning of February 2018 in central Whitby. Alongside the Women’s Shed already there.