Sheds in Half Term

First up, Staithes on Monday. A cracking morning with good attendance despite the cold! 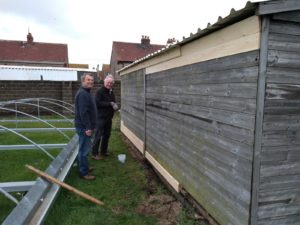 Malcolm, Graham and a likely new Shedder, Philip, began to clad up and strengthen where boards had been missing on the outside. Letting water seep in and cause wet rot in parts of the Shed. Take a look at the photo below.

Next up on this is a couple of boards to add on the other side and then a brushed protection treatment outside and inside the wooden shed. Finally, we will put up some guttering to direct water from the roof away from the lower part of the walls.

We will move inside then to line the walls with a water barrier of plastic sheeting, insulation and boarding. 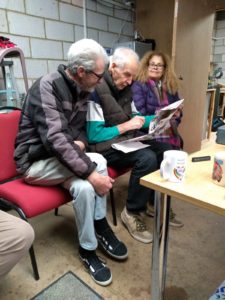 Indoors today there was some great conversation with two or three sharing what the Shed meant to them. Very moving testimonies. The photo shows Brian and Norman poring over leaflet on machine parts. Maggie looks amused at their enthusiasm:-). On Thursday the lads pushed on with refurbishing the wood shed. Rebuilding the entrance step; painting preservative on the walls internally; finishing strengthening the doors; Tom bringing insulation roll to insulate the walls. Next Monday they will be busy lining the walls  – very satisfying to contemplate!

Tuesday at WHIMS (Whitby Men’s Shed) we had two new men arrive to inspect (Toby & Peter) and both left saying , “See you next week!”.

Graham received grateful donations of a door and door frame from Howden Joinery for BayThorpe Shed. They are for the pull-out sleeping pod. 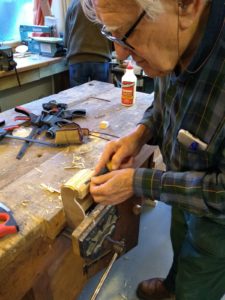 Ted making a sleigh for Santa 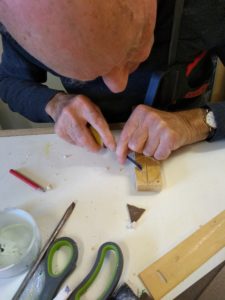 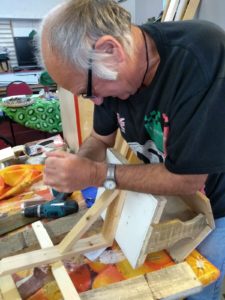 Well what a funny day yesterday. We were a depleted lot, just Olly ,Simon and me. Some were on holiday and others had commitments, so we took some time discussing upcoming projects and getting the equipment out from behind their covers, so that when people come they can see what we have.

Olly found these lovely pieces of wood (below) on a huge wood pile that a local farmer said he and Stuart could rifle through. They will take time to dry out before he decides what to do with them. 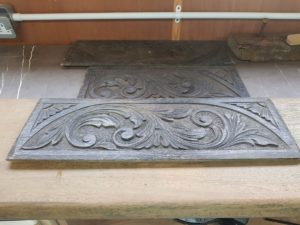 Simon kept us guessing where this huge piston came from (below). It turns out it was obsolete from Fylingdales. Simon’s fond of the weird and wonderful. 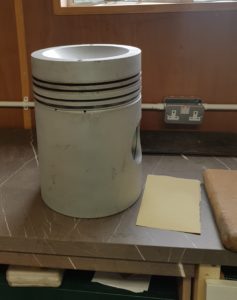 Bay broadband has started to be put in and will be connected soon. The final two heaters were installed  this morning and give out ample heat. [Just in time for winter:-)]

As seems to happen most Thursdays now, another  new local chap popped in, called Keith. He hadn’t been before and seems keen on the proposal to start a Tuesday Shed. Next was Ian, a regular, he’d bartered some babysitting duties for an hour with us. People will do anything to get there!

Finally we were caught sitting  down by another Keith and his wife Dot. He is the Littlebeck regular wood turner, so Olly gave him a guided tour of our hidden treasures. As a seasoned wood turner**, he headed for the lathe and said he may call down to give a lesson or two.

** Elaine. Do you mean Keith uses seasoned wood or that Keith himself is seasoned?