‘Reboot’ is the name of a project being considered for adoption in North Yorkshire to take redundant laptops and tablets and give them extended life for children and older people who want to be affordably digitally connected.

Take a look through this .pdf on the subject.

If Reboot goes live, is this something that you might play a small part in for our area? Do you have any forgotten digital devices that may still have life in them? Ones that Reboot could clean off, work on and ultimately distribute in our community as part of a co-ordinated scheme.

Could you check over devices (best endeavours) or maybe support would-be users to get onboard by being a digital  buddy alongside them (Covid-safely) patiently helping them gain confidence? . Sheds have enabled a few Shedders to get sufficiently acquainted with technology to join in our Zoom chats and surf the web too! It has been a life saver in lockdown for two or three octogenarians.

Coincidentally, Graham also embarked on an exercise independently. There was a hudl tablet (the kind Tesco once sold and promoted before Amazon Fire tablets) and an hp laptop belonging to Whitby Shed.

Neither worked it seemed. Attempts to reboot in the past led to cul-de-sacs. The hudl failed to complete its start-up cycle and the laptop suffered a memory problem (or rather we did because we could not remember the password used!) Both devices had been set aside in frustration (which means forgotten).

Graham rediscovered the hudl in a drawer of electronic bric-à-brac and decided tp try again. No joy after charging it fully. He decided there was nothing to lose by trying to look inside. There were no screws so it was a case of prising front and back apart carefully with a kitchen knife. Separated, he looked around and blew into it a few times (breathing life into it?). He tried restarting again with no success and decided to just click the case together again and abandon the mission. With zero expectation of a different outcome he tried the start button again.

Well, it did work. It got beyond the hudl logo on the screen and completed the start cycle. Success. Graham still has no idea what was done to make it respond.

With that success, two days later he decided to look at the hp laptop. If necessary he would do a “factory reset” and clean it down of content. He got to the stage as before of it asking for the password. However, this time after several attempts to guess the password there appeared a password hint.  That was what was needed. It jogged Graham’s memory.

That set off about two years worth of Windows and security updates with intermittent restarts. Joy of joys a working laptop. That laptop is now repurposed for the young people’s future workshops on making videos. 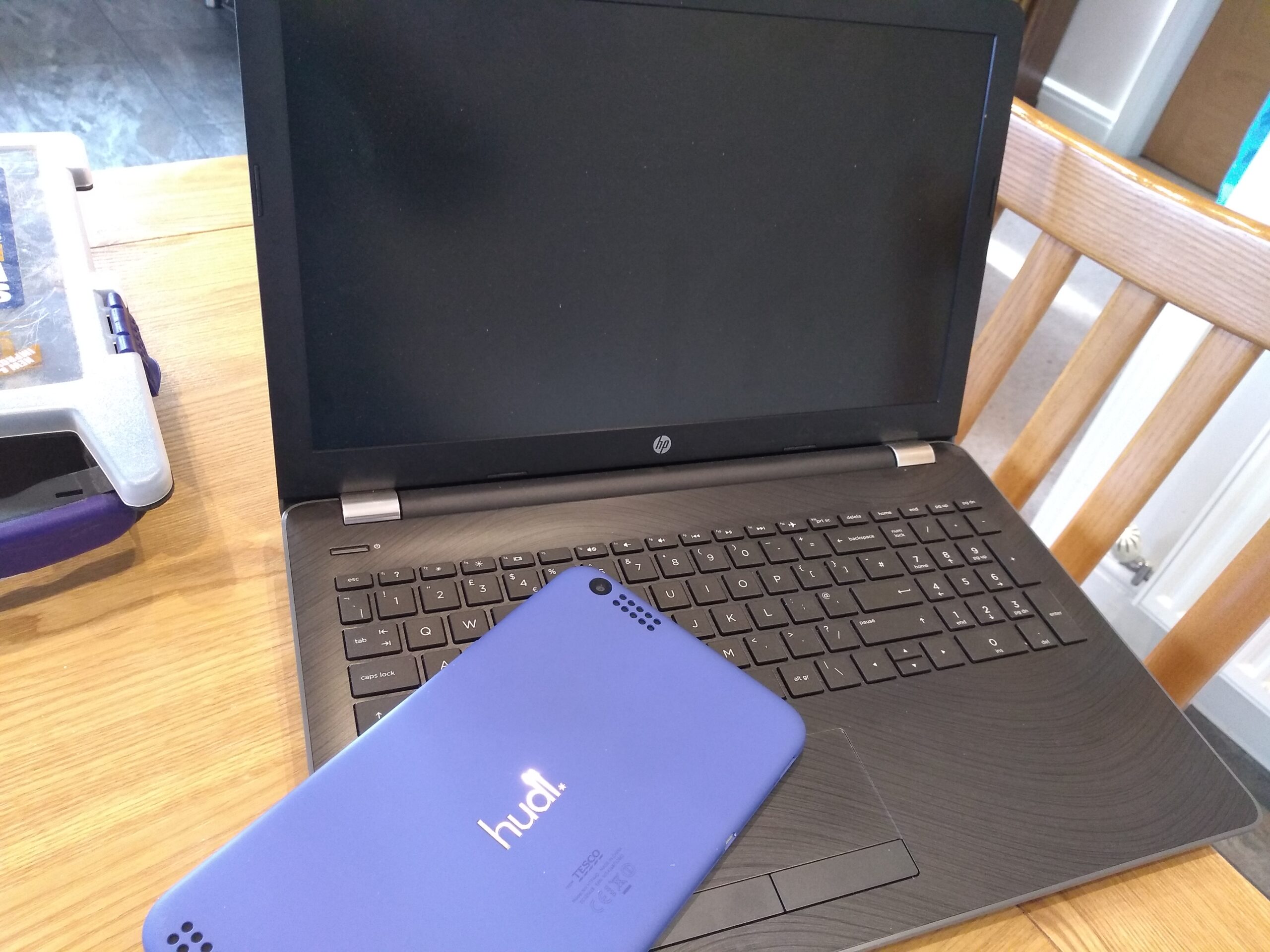 Green Screen in use today

We used a green screen backcloth on Zoom today for the first time. It provided a much more stable cut out image for superimposing on a backdrop (in this case the Sale Shed in Victoria, AU). Graham donned a mask and hat from the camera filters to pose. 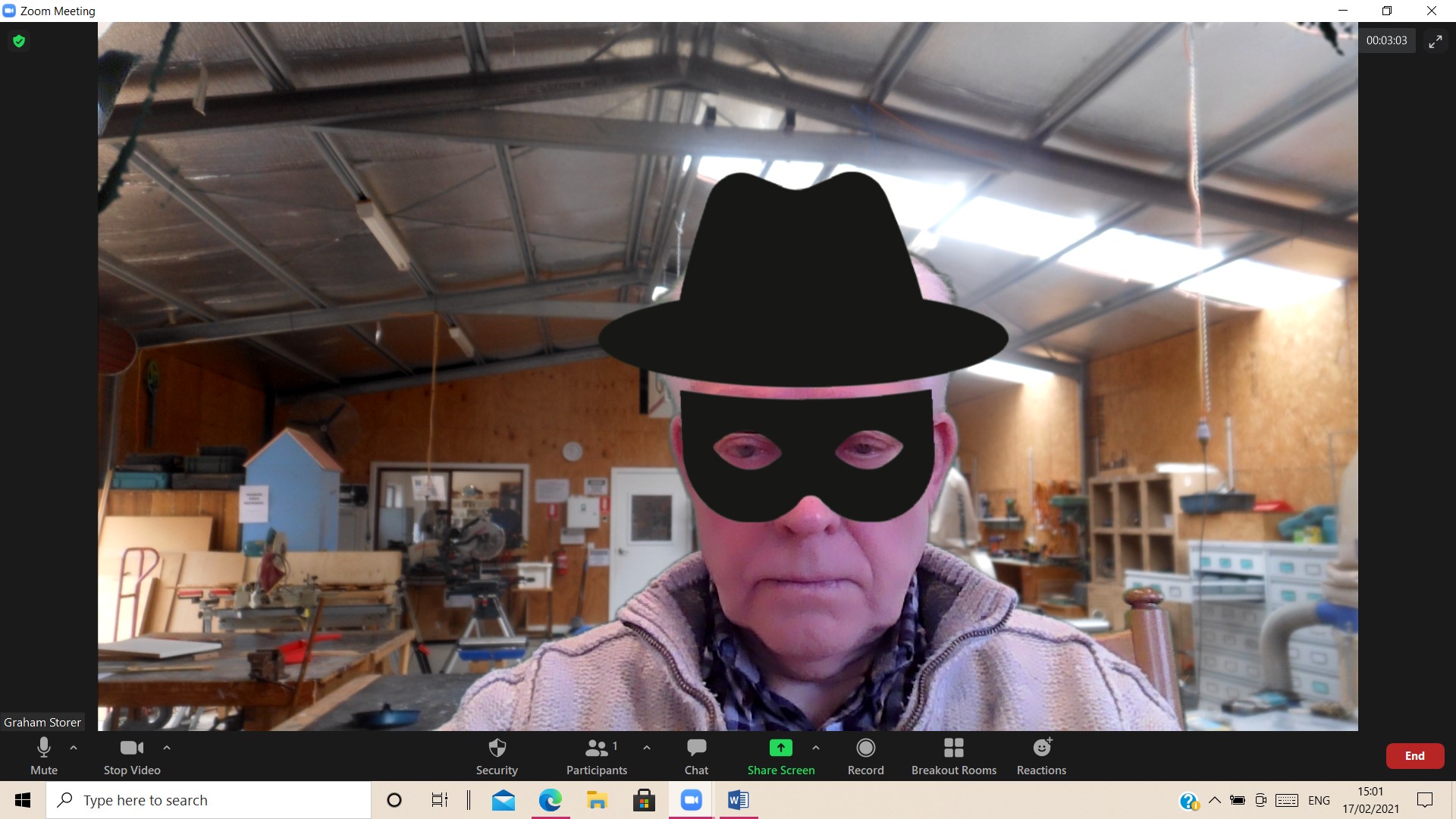 The Sydney Opera House is completed

It’s an iconic building as it seems to set sail across the harbour with the bridge as its backdrop. Even in model form it excites. 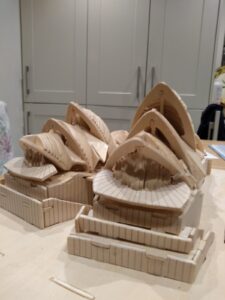 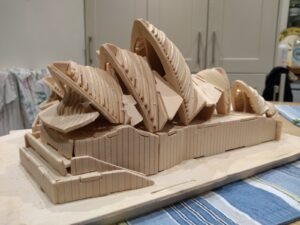 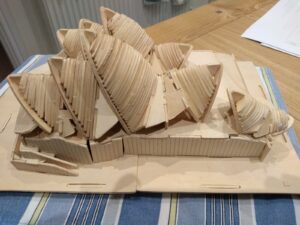 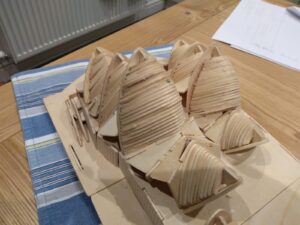