Our day of two halves

Monday 23rd April was a day of two halves. Below, you can read about and see in pictures the work carried out at Staithes by Shedder Brian and the young apprentice Ted.

However, we record first the sad passing of one of our newer Shedders, Merv Hill. He was at our gathering at Littlebeck with NYCC Councillors the previous Thursday. Although his physical health prevented him attending regularly (he had a degenerative disease) he would sometimes call in briefly while on his way to Scarborough for appointments.

A quiet man, we enjoyed his company and he seemed to fit with us. He had a keen interest in cars. One day, not so long ago, he walked over from Sleights to Littlebeck (but was glad of a lift back!) and we enrolled him in the art of befriending walkers and visitors to our picturesque dell.

His wife Shirley appreciates the friendship that the Shedders gave Merv. Today (Tuesday) the Shedders  asked for there to be a pause for thought this Thursday at the Shed to remember Merv, to reflect on his family and be thankful for each others fellowship at SAMS.

Beginning to make some headway. Two notable things were accomplished:-

A hole through the dividing wall approx. the size if the door frame! 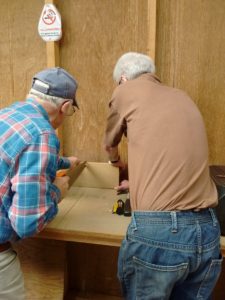 Ted dressed for the occasion in genuine Shedder gear. He wielded the saw in professional style 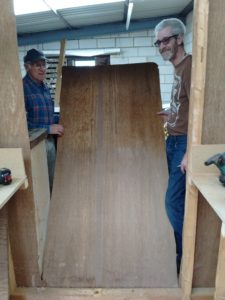 The two worlds of the Shed are united by a door to the en suite workshop. 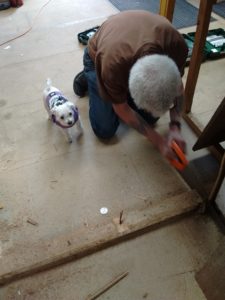 Brian showed dogged determination to get the job done. 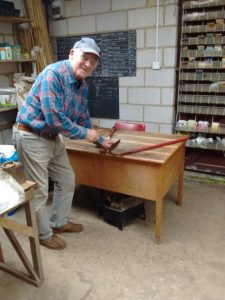 Getting bored, Ted found some Garden Club shears to clean up. 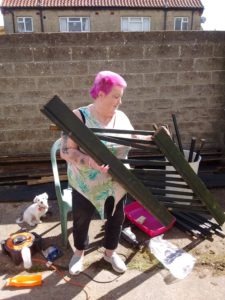 Mother of the day was Shedder Linda. She and Brian have been collecting “very useful” rubbish including timber which is an important feedstock for Sheds!!  Here she is fighting with a fence to remove spindles.

There’s a lot of other stuff too and there has been a chair refurb job going on in their kitchen! The results will be published soon. 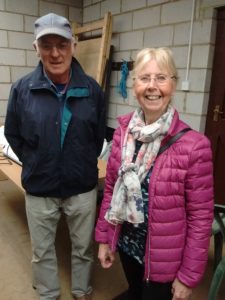 And  “apprentice” Shedder Ted did some sterling work as you can see above. His wife came to check on his progress and  inspect the standard of the work done. She seemed pleased. Not sure about Ted!