Home General News One of those days at Staithes Shed

One of those days at Staithes Shed

Those days can be good days or bad days but today was brilliant. Why?  Because of people! 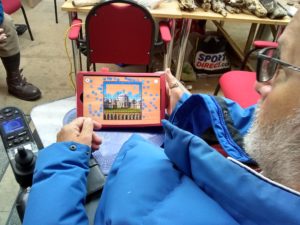 Something we had never seen before. Ian enjoys doing jigsaws using his tablet computer.

Into the Shed rolled Ian, deftly controlling his wheelchair, and on his sticks came Colin. Big Brian is in part responsible for them coming. Brian drives once a month for Lythe Farmers’ Breakfast. We are not sure how many who attend are in fact farmers or know one end of a hoe from the other, but Ian and Colin attend and Brian has met them there.

An important point to (again) make is that there is often a network of information/support/assistance/guidance from different quarters that bring people into the orbit of the Sheds where people give them a taste. In both thhttps://whitbysheds.co.uk/one-of-those-days-at-staithes-shed/ese cases, Whitby Living Well had a role too and maintains contact with them.

It is helpful because in virtually all circumstances (not just for those physically limited) there needs to be a tailoring of fit for individuals who come. Sheds and individual adjust “actions” to achieve as close a fit for “satisfaction” as we all can. Sometimes that mutual accommodation does not work out. But a genuine attempt is made.

Back to these two guys. They  both have great senses of humour and even politely laugh at Brian’s and Graham’s jokes. Ian tried his hand at pyrography, burning the name of Staithes on a piece of wood. Colin wants to have a go at renovating a cabinet next time.

Tom was there with evidence of wood coming or going – mainly coming! – but he did start to make an impact on removing wood from the Pigeon Shed so that we can assess work to be done. 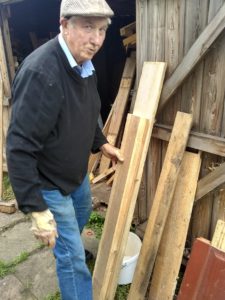 Tom sorting out some of his wood pile with his cap at the usual jaunty angle. He is a treasure that should be safely locked up!

Maggie  well provided for us in terms of tea and  showed Ian her pyrograpy exploits on number plates for the car made for Staithes School.

Martin was there, encouraging us to tackle some blockwork wall repairs on Thursday (subject to weather).

Into the Shed came Ken, as ever in his shorts. Graham was summoned to go outside with Ken. What had we done, thought Graham. Who forgotten to turn off lights or left a tap running?

Never fear. Ken took Graham into the inner sanctum of the Sports and Social Club, beyond the usually locked doors to a large recess the size of a room. Ken pointed to a door marked “Disabled Toilet”. The Club (in particular Rachel) had recognised the potential need for access to a toilet of larger size than those in the changing rooms.

How very, very thoughtful of the Club. Ian hot wheeled over to take a look!

As Colin left, behind the wheel of his adapted car which he had not been able to drive for some time because of a strained shoulder, he said how much he had enjoyed the day and the nonsensical banter.