Home General News On Your Bike with Pestle and Mortar

On Your Bike with Pestle and Mortar

Maybe this is a competitor for intriguing headline of the year! All part of our usual unusual week.

Recently our Sheds were approached to see whether we would like to help promote the Tour de Yorkshire in May. The ride will start in Beverley and weave its way up the coast to Redcar, passing on its way through Robin Hood’s Bay, Whitby and Staithes where we have Sheds, of course.

The call went out to the Sheds and the response was positive. We want to have objets d’art that are not there just on the day but also leading up to the event. We want what we do to be a part of the communities we are located in. We want children and families to appreciate what is installed.

Our feeling is that BayThorpe and Staithes are best placed for this. What is displayed can be there for some days before the Race event.

Then NYCC asked if they could film at a Shed location and have Shedders talking about their ideas. Also, to invite ideas from the community too.

BayThorpe Shed has been quick off the mark with an idea and two Shedders from BayThorpe will come to Staithes on Thursday.

Elaine Marsh is our special correspondent (is she special?) and she has filed a report for today. Take a look at the day and the idea they have in their prototype 1 (small scale).  Already they are into prototype 2 it seems.

My first time back since Christmas and things were in full swing. The guys are fired up with the Tour de Yorkshire challenge, Ian having made prototype 1, a penny farthing,  since Thursday. He and Danny then started on prototype 2, it’s going to be an amazing structure which will hopefully be then transformed for the Victorian weekend in Robin Hood’s Bay.

Olly and Stuart , impressed with the new drawer fronts, decided to replace the ” rustic ” pallet drawers with mdf ones…12 down 4 to go.

Stuart’s mum came down for a drink and chat, while Dick braved the cold and cleared the village hall gutters. Stuart’s wife Sandra, hid behind Dick as she’s camera shy, but does a great job washing up.  Elaine Marsh 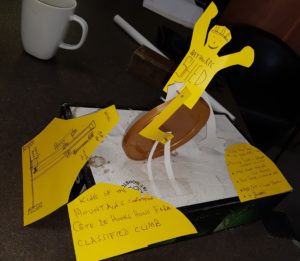 A really great concept model. There’s movement without any movement! 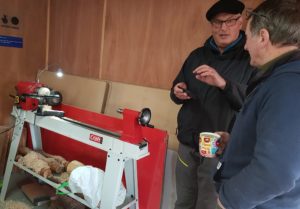 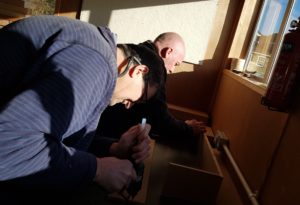 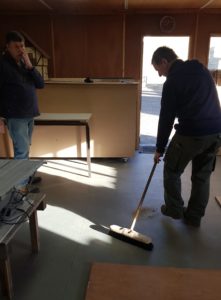 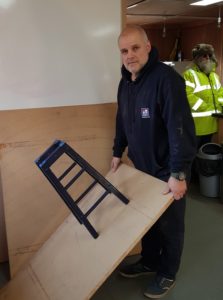 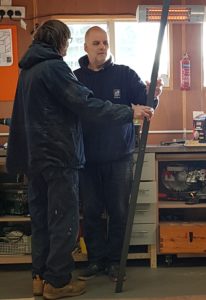 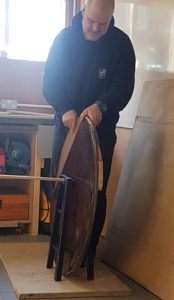 At Whitby Shed we had a new man arrive, “Sugar” by nickname. A very good morning chatting and doing. Gate being undercoated. Second one being assembled (I hardly believe what I see – craftsmanship?) 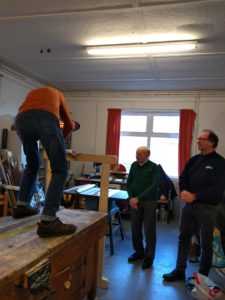 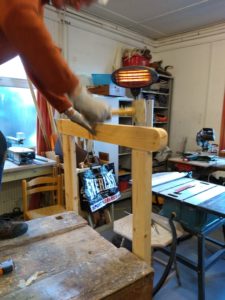 At SAMS, Littlebeck, it was a very productive morning with “truck” sides attached to the roof of the “bus shelter” to hide tidily items stored on the top.  But Eddie made a pestle to go with a mortar his wife had requested (ordered him).

It seems to some of the Shedders (i.e. Graham) that this might be Eddie providing armaments to Veronica. Graham remembers a warning notice in the first Shed he saw in Oz). 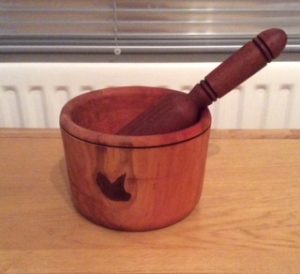 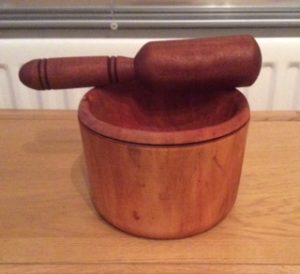 At Whitby Sugar was back for a second day. One gate had a full undercoat ready for top coat green next week and Tony nail-gunned the slats into the other gate frame.
Lance gave tuition to Rob on the lathe. Look at what he turned out. What a smile on Lances face! 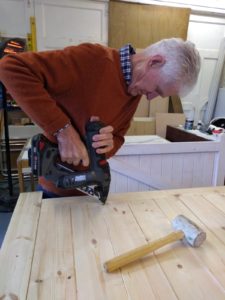 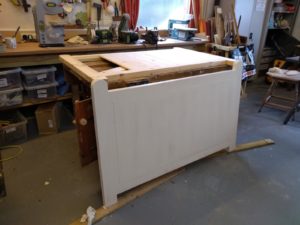 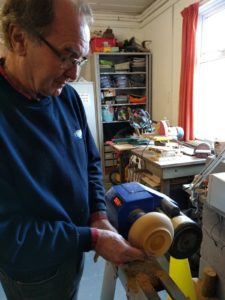 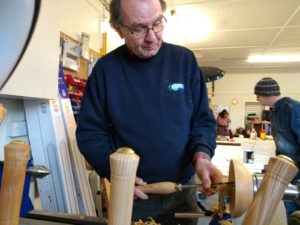 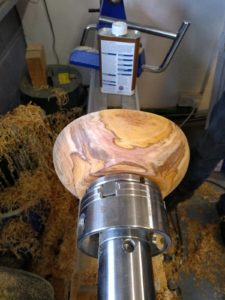 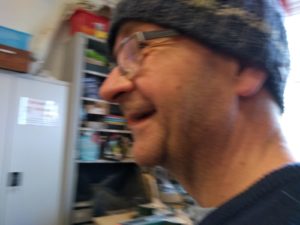