Ought to be Asked Questions. For you to discover the basis of what a Shed is and does. This is the beginnings of some answers to shed light on matters. These were written from the female perspective but the OAQs apply equally to Men’s Sheds. Chivalry, women first :-).

This is a very important question. Sheds are there to help people, and in the case of Whitby Women’s Shed it is primarily women. The “primarily” will be explained in another question later. People come with a need which is related to a loss.of some kind causing them to be isolated or disconnected from social relationships. 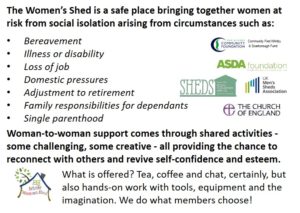 The Whitby Women’s Shed .postcard is a succinct summary of the basics. (see the card in one of the early posts). The reverse of the card lists some of the common “losses” including bereavement, change of place, mental well-being, job, family, confidence, self esteem  . . . . and many more.

If the only need for a prospective She Shedder is recreation, the Shed is not for them. The recreational activity is there to offer “creative distraction” from the concerns that individuals come with. Doing and being with others is therapeutic. You realise that you are not a lone oddball but one of many oddballs! A Shed is a delightful mix of folk. The aim is to help women move forward from first base! 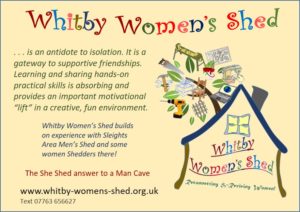 The She Shed (as the Men’s Shed) has people referred to it by relevant agencies, by relatives and friends, and by personal inquiry. However it is done we like to know a little about what the “loss” is that the individual has.

Some come with deeper needs than others. Some look as if they have no problems – but they are often  well hidden. People come one by one and not in groups. Numbers at the Shed are limited and it is important that we get the balance right as far as we can judge.

We welcome visitors looking around to  see what Shedders get up to, especially when they bring cake:-). If you want to join, (or you are a carer, please make contact first via email, mobile or text.  WhitbySheShed@gmail.com  ;  07763 656627

Well, could we invite you to look at the video Yorkshire Coast Homes did of SAMS, the Men’s Shed. here  That will tell you a lot by not only listening but also watching those in the background. The man sitting on the bench next to Shedder Roger is Bert. He never said much there or at home. He remembered little, but he meant a lot to SAMS and him coming meant a lot to his wife. Bert would occasionally get a twinkle in his eye and he would perform a market cry to entertain Coast to Coast walkers who came in to the Shed. “Come on ladies, I’ll hold your baby while you fill your bags!”. Sadly, Bert caught ill and died but for several months we brought a ray of sunshine to him and he to us. That’s a Shed at its best.

What a Shed can do is up to the individual as much as it is the other Shedders. Quite simply, if people come with whatever need they have and try, their self esteem begins to climb. We do find out a little about people before they come because we do not want to set  people up to fail. Nor to be a huge burden on the Shed. Gradually SAMS has taken on more and more unusual cases of “loss” that we might have considered not possible in the early days – too unsafe! But with experience comes more refined judgment by the group. They size up the individuals needs and attitudes and rise more often than not to the challenge of including someone without (s)mothering them. Sheds are magic places for changing the quality of life of people. They celebrate each others achievements – not just in the work they do but more importantly in the way smiles come amid some banter and people suddenly realise they belong.

Change can be amazingly rapid but deeper “healing of spirits” takes time for everyone. Sheds do nothing, but the people inside do connected to each other with tasks to be done.

SAMS was encouraged by a Sleights GP and supported from inception by NYCC’s Whitby Living Well team. The team was then one individual and the service being set up was to help socially disconnected people engage in community activities to interest and stimulate. Men pose a problem, as many women know! The problem is that men do not so readily engage in activities that require conversation and communication is often banter thrown around in the workplace. Hence, Living Well were keen to advise and encourage something specifically for men (and that  became the odd woman too!). Word spread and others like Carers Resource (help for carers), NHS Anchorage teams and MIND took keen interest and steered men who they thought were suitable in SAMS direction, sometimes accompanying them to trial first sessions. It was a learning experience for all of us.

When the idea of the Women’s Shed cropped up after some “guinea pig” came through SAMS, the agencies were keen to encourage it to happen. Once Whitby Women’s Shed settles in more, some agency referrals will start to come through one by one. The first one or two will be a learning experience for individual Shedders but also further establish the Sheds ethos of caring about each other. Sheds are not clubs to join but a form of mental healthcare. Nurturing the feel good factor. Whitby DAG also looks out for isolated people.

Our Sheds also work with a care home in Sleights for selected residents. The Sheds can only incorporate a handful, of such folk but it does them great good. We’ve got some thoughts being mutually worked up that might enable many more residents of different care homes to benefit. 2018 maybe.

Why do we work with Agencies? Because we benefit each other and more importantly we benefit their clients with needs.

The agencies come with knowledge of people. When we receive requests to come directly from individuals or from carers we need to discover a bit about them and to informally assess them as potential “fits” within the group. There are misfits in the group anyway:-).

Certainly. The Sheds are not just interest groups, they are for people experiencing – perhaps quietly – the pain of isolation and having lost something. People need to be able to express why they want to be at a Shed and how they think it will help them. Clearly, sometimes a carer explains that.

We cannot take people who need personal care like the toilet. If they come with a carer to do those tasks then that’s not a problem.

Workshops by nature are not hotel lounges, but we try to meet the needs of individuals where we can. The premises we use are not ours of course but the “landlords” are very willing to put in place, or have the Shedders do, basic improvements for access and internal mobility. Some activities will not be so simple for people with disabilities, but they often like to watch and do other things that challenge seated at a table.

Of course, a big limitation is numbers from the point of view of it being a workshop with benches, tables and equipment. On the other hand, once numbers get above 12 to 15 the flow of communications, interactions and group relationship breaks down The family fragments. Thus numbers are limited which is why it is not just a case of friends bringing friends. It is not per se a friendship club, but a place where friendships can be made alongside making other things!

Finally, we do not provide transport as part of the Shed organisation though Shedders often help one another that way.

The answer is that Sheds are not that easy to start. The reason is that there are many ingredients (not least premises and cash) before anything can get underway. Village Halls and similar places are often not suitable because they are multi-use buildings. They are suitable for craft groups, but not for Sheds (even though some of the activities may be craft).  Storage is another big problem.

Also, rents and utility costs must be affordable (i.e. not commercial rates). Even though grants are usually a starting point and cover such things as rent, that is temporary. To be stress free, operation of a Shed needs to be ultimately (by 12 months say)  sustained by members subs.

Then there’s researching needs, writing bids (and waiting :-)), arranging insurance, gaining supporters, dealing with agencies (developing those trust relationships) and getting a small, capable, communicating, team of pioneer Shedders who have themselves a need for a Shed.

Thus, SAMS was pretty much alone in North Yorkshire (and we think actually alone). Our nearest Shed is Redcar which hit the ground a few weeks ahead of SAMS. Now, two years later there are very good prospects for 2 Sheds in Scarborough, a second for men in Whitby (to ease the pressure on SAMS) and Sheds are being looked at for areas way from Whitby in the rural areas.

If the atmosphere is right, Sheds virtually run themselves because people find their level and interests and become leaders in activities. It’s bottom up and not top down except for Shed responsibilities like finance, health and safety, external relations and so forth. (the jobs people don’t want to do!!!).

SAMS took 3 months to set up, but a fair bit of background work had been done on premises and connecting to funders. Also the core half dozen men who needed it were already identified (largely by accident).