Tuesday at Whitby Men’s Shed was not what was expected as dawn broke, which is about 9am in North Yorkshire on a grey day! 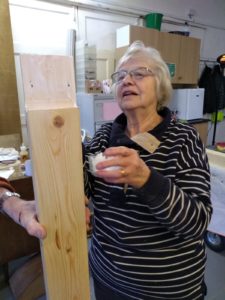 Betty is quite stuck up.

We had two new men arrive, although sadly one we took to Whitby Minor Injuries Unit. No accident, but definitely feeling unwell. They checked him over and he was well enough to be collected by a relative later. It was a reminder of what Sheds try to do to support each other, but not usually on first meeting!

The other new man (who had to be ignored because of the incident but found himself conscripted to help) is an ex-engineer (mechanical and electrical) but who has a heart for isolated people. We’ve got 3 LED lights for him to put up!

He came having visited the Food Bank to see volunteering opportunities. They had had a hand in steering him in our direction. He was very taken by Norman’s artist and dog automaton he’s just finishing. Having lived through a bit of a chaotic morning he said how impressed he’d been with the atmosphere and sense of caring at someone’s time of need.

He and his wife are two of the many who see Whitby as an active retirement destination. However, having settled in, he wants to do something to help the community into which he is settling. To get to know people. He certainly knows how to be ignored! We hope he’s a Shedder in the making.  ****

We moved on to do some work on the new gates for the Scout Hall. We rounded off the tops of the 4 vertical members so that rain runs off.

***** I don’t believe it, says Graham. As I was adding the photos below, in came an email from Rob Shilson (the man above) with a report on his first day.  Not requested or suggested. Spontaneous 🙂

Wednesday dawned for the Whitby Women’s Shed. Elaine had gone downhill again with her cough  and she confined herself to home. Marie was busy on C&G work at home to meet deadlines.

However it proved to be a very illuminating morning! Katie was concerned about Elaine but also yours truly. She penned a lovely note of thanks for the Shed. Choked Graham a bit. Maeb has been busy visiting friends and family and she arrived wishing us all a Happy 2020!

Betty and Tony (joined later by Graham) got on with assembling the first gate from the kit provided by Lance. Take a look! 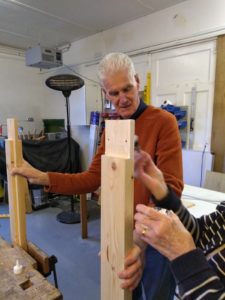 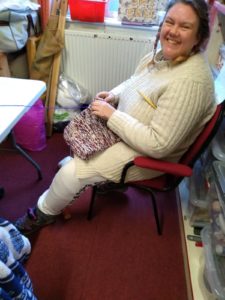 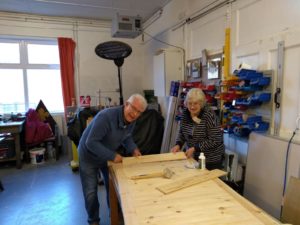 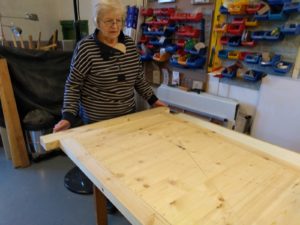 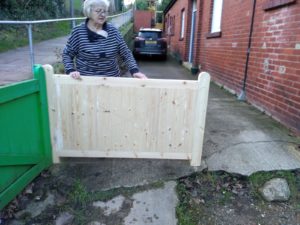 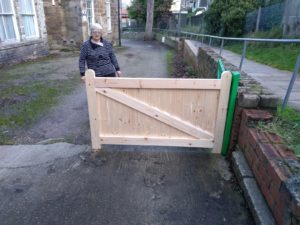 We have received a message from Lance who said it looked great and we’d done well. We will not let him get any closer to this gate so he cannot change his opinion!

Ought to mention Alexa!

The lads on Tuesday apparently loved having Alexa around. On Wednesday she was obediently responding to commands to play various radio stations and give us the weekend weather! In the photos above Betty and Graham were pinning boards to the gates to some delightful music that Norman had chosen. It was most relaxing. Thumbs up!

Today, Graham spoke with his son to the east of Melbourne. Smoke was pervading the atmosphere blown from the east. We don’t always realise the consequences of large events like these fires. For instance, planning is going on in schools as to how to handle youngsters confined indoors possibly. More seriously, one of the school families in a rural area lost all. All includes all documentations needed to prove identity for various help. Thus, a new school ID card was urgently printed for one of the children that maybe provides some evidence of existence.

We should remember families like this as well as those in our country who lose use of homes in floods.

THE ESKY BAG. Think of the picnic cool bag. The call in Australia is for people to visit the areas devastated by fires but also the exodus of tourists. High summer is when small traders expect to make money to carry them through the rest of the year. The suggestion is that families visit such a town; spend a day there; have a meal; spend some money and fill an empty Esky bag with produce to take home. Investing support in someone else’s community realising that they need to share the pain.

Here is a news item from the Benalla Ensign, the local newspaper.

The devastation caused by recent fires across the country has brought out the best in communities – it has also inspired some new ways to help those affected.

Ms Prince said the beauty of the Empty Esky was rather than simply giving people something they need, it encourages people to support the economy of a community, allowing them to help themselves.

“One of our friends started Empty Esky about a week ago and within a week they had more then 16 000 followers on Instagram, which is a huge amount,” Ms Prince said.

“So Empty Esky encourages people to go to local communities that have been affected by fires and visit local businesses.

“Take an empty Esky, or a car with an empty fuel tank, or even an empty shopping bag, and fill it up with items from that community.

“Get a tank of petrol, buy some local produce, have a coffee at a local cafe, and get lunch at a local restaurant.

“Support those businesses to keep those regional and rural economies alive.”

Ms Prince and Mr Mioni are travelling from Ringwood to Noosa stopping at as many regional towns as they can along the way.

The idea is two-fold; to support local economies; and to create video-content to promote Empty Esky through social media.

Mr Mioni said the beauty of an initiative such as Empty Esky was it had relevance to anyone who wanted to do their bit.

“We decided on Benalla as the first stop on their journey as we didn’t know if the town needed help,” Mr Mioni said.

“Coming from Melbourne we were aware there were fires in the north east, but not certain which exact towns had been affected.

“So it’s possible people have cancelled trips to Benalla or decided not to stop for fear of fires in the area.

“So our first stop is to spend some money in Benalla, to support the local economy.

“But equally people in Benalla, which it turns out hasn’t been affected too much, can take a trip east to some of the areas recovering from fires and support those economies.”

Ms Prince said another positive was people who participated knew exactly where their money had gone.

“I feel like a lot of people are wary to donate as they don’t know how much will get to the people who need it, so with Empty Esky they know exactly where their money is going,” she said.

“And people might also want to help, but not have much to donate.

“With Empty Esky they can do something as simple as go to a fire-affected town and do a week’s grocery shopping.