Home General News Making an Exhibition of Ourselves on Camera

Making an Exhibition of Ourselves on Camera

More than a year ago, pre first Covid-19 lockdown, we had begun equipping our Sheds with broadband in one form or another, TV monitor, web camera and Amazon Firestick. 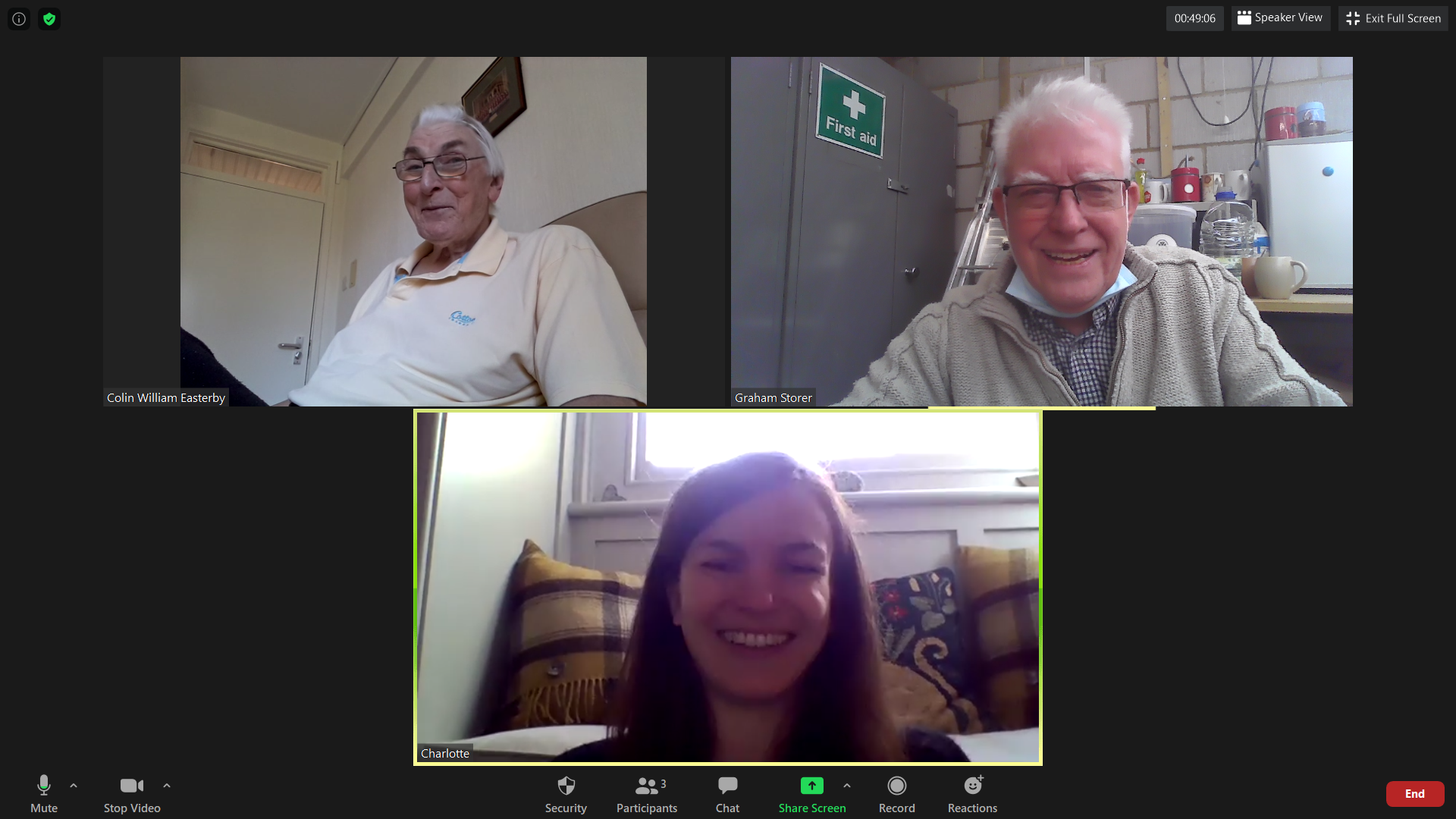 Charlotte Gal and Big Col (in one of his early appearances on Zoom).

We pioneered online communication at Staithes and followed through at the Sleights Shed. We were about to install in Whitby and BayThorpe Sheds when coronavirus hit. That was nearly  a year ago.

In the short period of slightly reduced restrictions in our area in the summer we used the equipment at Staithes to invite Charlotte Gal, our London based People’s Health Trust Project Officer to view for herself what she’d only learnt about through reports, telephone calls and our web-site. She saw us warts and all and enjoyed some banter and experiencing aspects of the Staithes Shed that are not easily described.

About 15 months ago Shedder Lance asked what the possibilities might be for him to get funding for equipment to record and broadcast demonstrations arranged by the Wood Turners’ Club to which  he (and a couple of other Shedders) belonged. Yes, a year went past and when in the second lockdown we began on Zoom  ‘Talking Sheds at the Kitchen Table’ twice a week the idea for demonstrations cropped up again, recently reinforced by our Zoom cooking exploits, We are also working with others to help children and young people at present. Online holds no fear for youngsters (nor some of our octogenarian Shedders!).

Thus Shedder Lance’s enquiry grew legs again. Is there something we could do to set up demonstration facilities that could be shared with others too. It had to be “wire less” as much as possible to keep cables away from moving equipment plus the ability to switch camera angles easily to catch context, communication and close ups of techniques. The point where chisel and wood meet with curls of shavings streaming off. Same with cookery and children’s activities too.

Graham took up the challenge, liaising with Lance. We soon discovered FREE open source software that could combine visual and sound streams from devices and export a virtual camera output that feed into Zoom, Skype and the like. Have you seen those physical control desks with a myriad of buttons, knobs and sliders? Well, Open Broadcasting Software is that but appearing on your laptop or tablet. 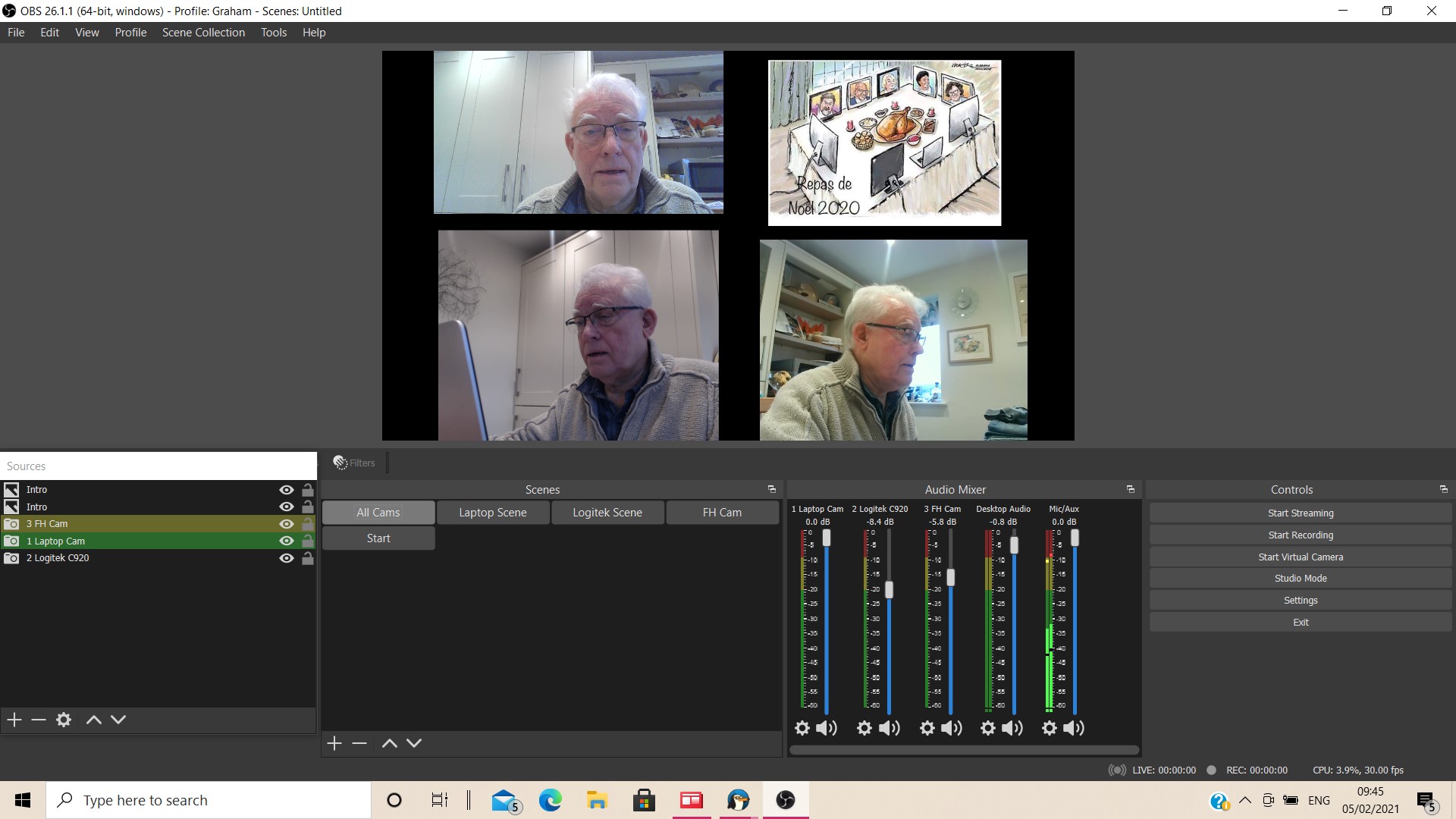 Here is the scene editing view. In this case a scene including 3 cameras (laptop and two webcams) and an image from a file. This combined view is then available as an output to Zoom (so called OBS Virtual Camera).

There are two concepts of importance. On the left is a list of the Sources (the available cameras, chosen images, PowerPoint, link to an external website etc). These Sources are the components drawn upon to create Scenes These are the grey blocks to the left of middle. It is these Scenes that are then individually selected to be streamed to Zoom and seen by an audience. Simply by clicking on the scenes, they appear in the Zoom meeting as your contribution!

Sound mixing is provided too (the vertical sliders) with the individual sound sources. Webcams have microphones and the laptop too plus headsets, of course.  A wireless headset has no cables and offers freedom of movement for the wearer (the lathe demonstrator or cook!). 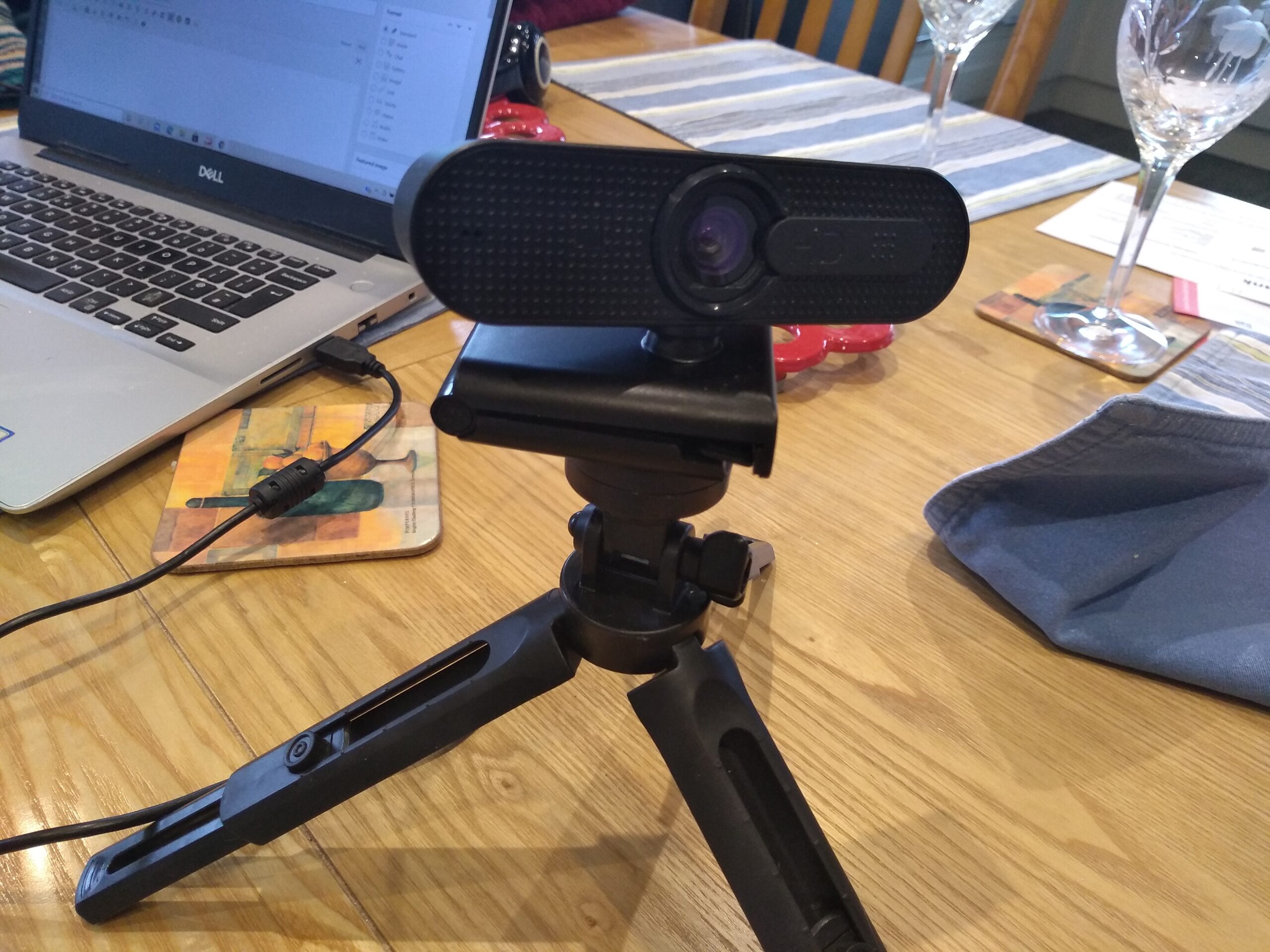 One of two webcams plugged into a USB port of the laptop). 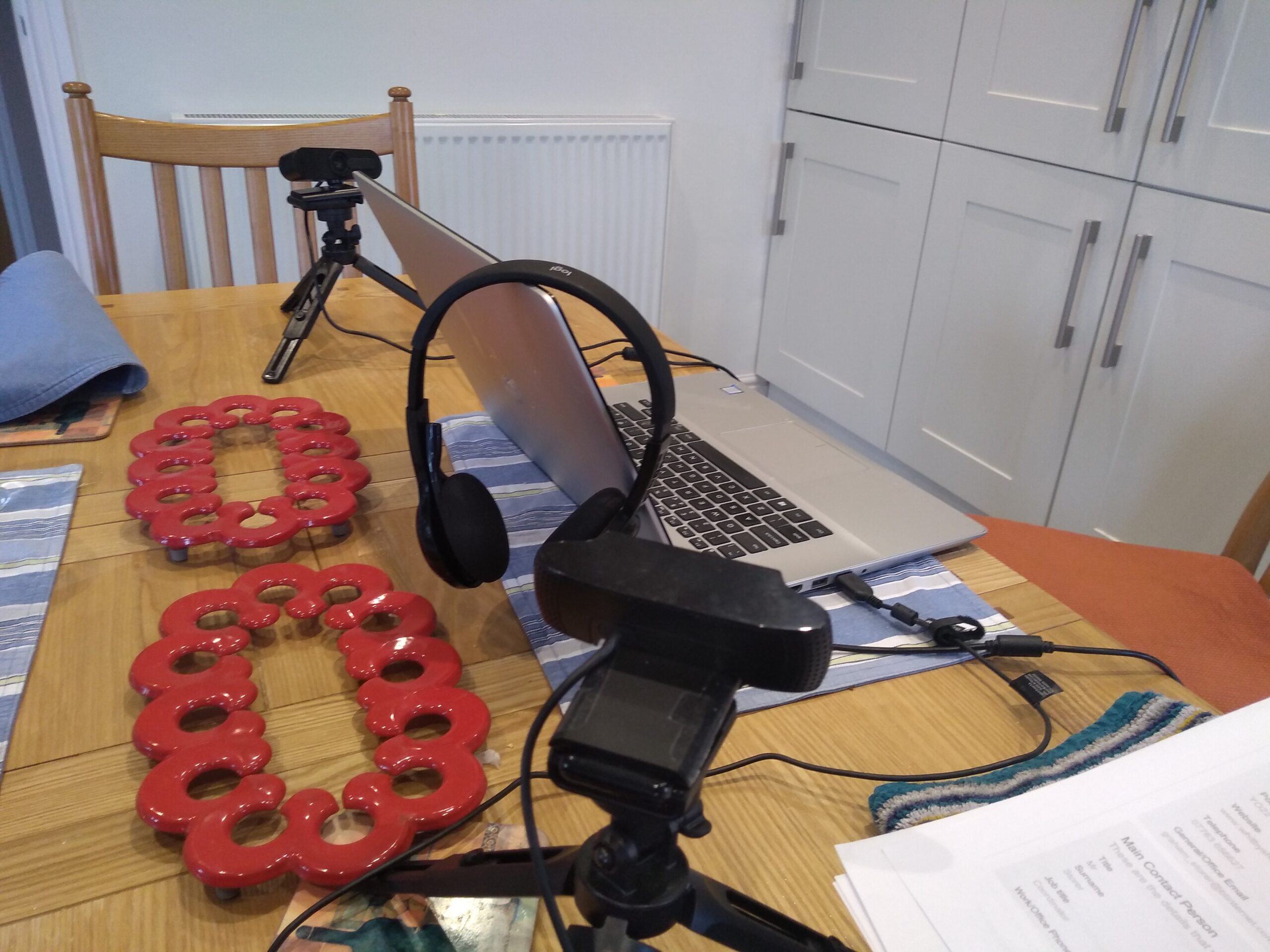 Two webcams plus the headset dangling on the laptop screen.

There remained one problem from a demonstration point of view

Having laptops propped close to lathes or even on the chef’s table is not the best of ideas. They need to be close at hand to switch between scenes. Graham spoke with his Aussie grandson who told him about stream decks with buttons that can be programmed (which Graham had seen but had not liked the prices of). These would remove control of scenes away from immediate workplace. The grandson also said that a mobile phone could act as a remote stream deck with the appropriate connections to the OBS software. The particular software would have a rental cost beyond a trial period.

Graham had got this far with the only expenditure being on a couple of webcams he already had plus a headset with microphone. He wanted to continue on a free basis for this next step. Googling revealed FREE software again (Up Deck) that supplied the remote control desired. With hindsight, it was easy to implement Up Deck but it entailed many attempts over a couple of days until the penny dropped and the green light lit up! Patience and persistence needed as ever. 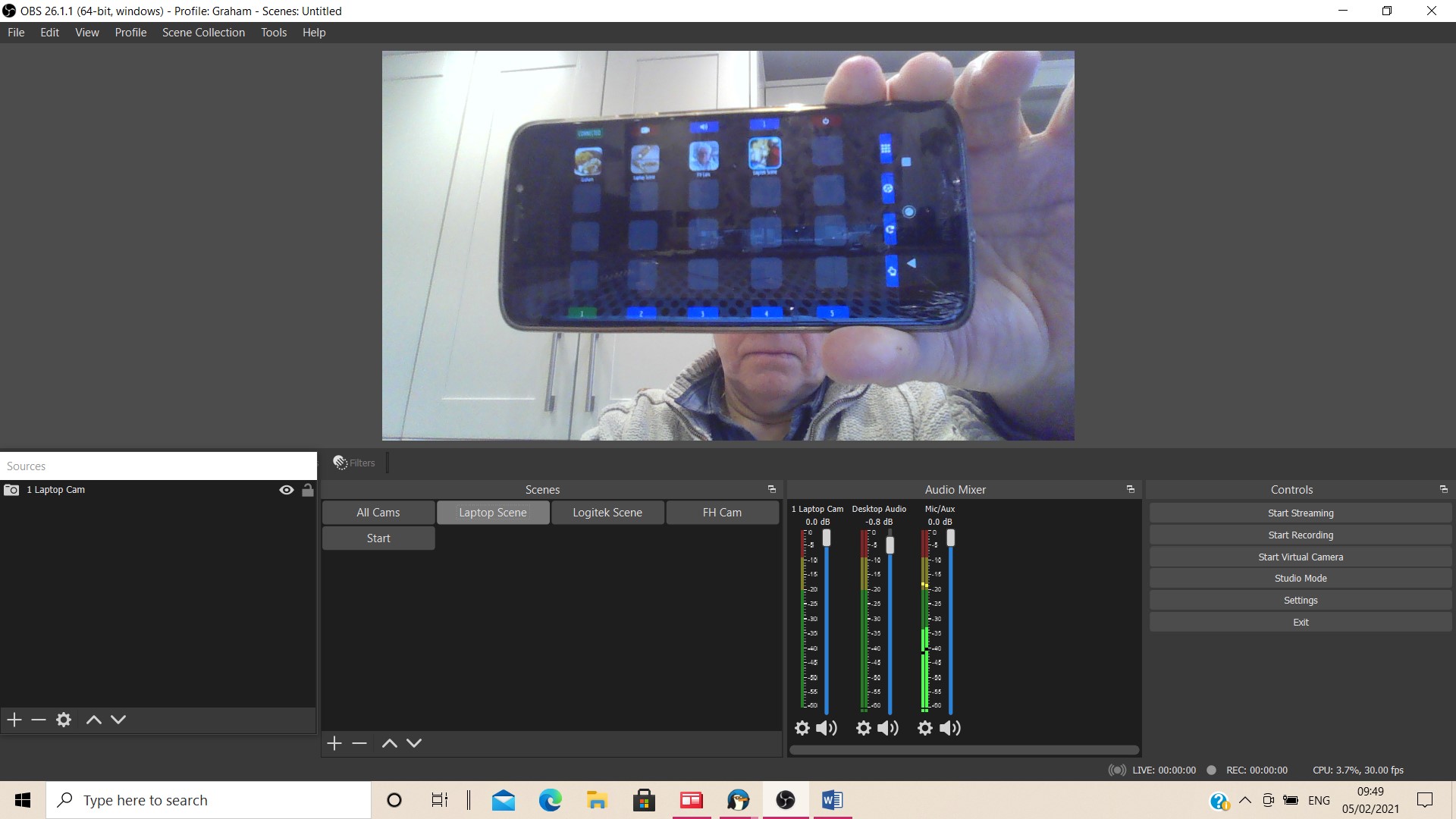 The buttons have images on them. For the first attempt they were random images with no meaning – cookery, turned pens and Graham’s mug were used).

This button display is created on the laptop and under each button there are simple instructions for OBS to follow. For instance, Switch followed by Scene <All Cams>  will result in OBS streaming the 4 view image in the first illustration above.

So, mission achieved with little expenditure. Experience gained which is a very Shedding driver!

Green screens and the recording of mini videos. Wait a couple of weeks for this but it will be low cost again. Made in Whitby Sheds. 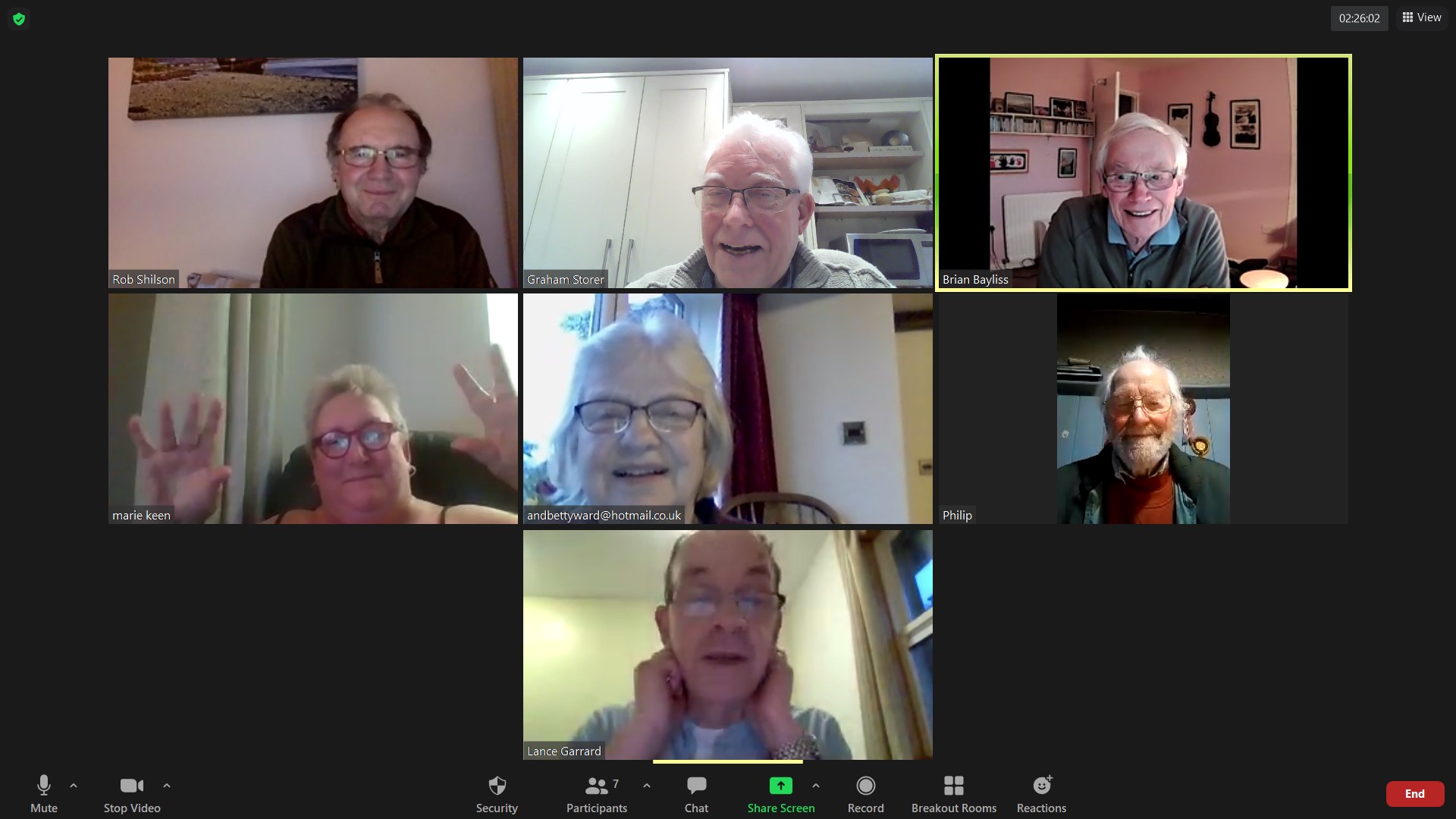 Yes, on Talking Sheds Graham used the OBS capabilities to bring different angles into his contribution! Lance was on (with an intermittent connection) and saw the potential for demonstration purposes. The smiley gallery of mugs is a well rehearsed set of poses that soon return to normal! All good fun.

How the parts fit together


Then to something a little simpler 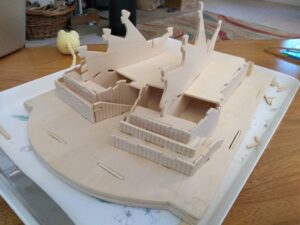 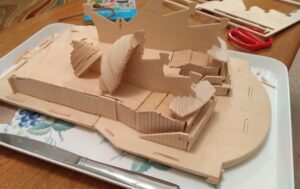 Now the shells are being added

Recipe for Thursday’s Bake Off and chat

We are baking at 10.30am (all welcome to join, even to watch) and at about 11am Rachel Meadows of UKMSA will join for an inspection of the troops.

Use the two curved arrows at the bottom left of the screen to move forwards and backwards through the recipe pages.