Home General News Lockdown can be a time to re-acquaint and make new contacts.

Lockdown can be a time to re-acquaint and make new contacts.

I don’t have the time!  We do have now:-) Here are two musical contributions from an old friend, Steve Foster of Robin Hood’s Bay (known as the Singing Vicar) and Phil Smith of Sleights who is a new contact for Graham!

Here is Steve’s Story behind a piece he wrote in 2009 about the Coast to Coast Walk.

Here you go me signing Doing the Coast to Coast which I wrote in September 2009 for a sponsored Coast  to Coast walk organised by the Countryside Charity CPRE.

The CPRE had contacted Jim Foster who was the editor of Bayfair Magazine and ran the Folk Club to tell him about the walk and that the walkers were being set off from St Bees Head by a Brass band. They asked if Jim could organise something similar at Robin Hood’s Bay.

Well we don’t have a Brass Band but Jim contacted me as I sing a bit and play the Banjo (which is almost as loud as a brass band!)

I agreed and decided that I should write a song about Alfred Wainwrights’ Coast to Coast walk.

I had already been planning this and although I’d never done the walk I knew a few folks who had and I had read some books on the subject so the research was in place but the song not written.  The walk was due to finish later that week so it was a rushed job but by the time arrived for the walk to finish the song and tune was sorted.

I was contacted by a member of CPRE and given the estimated time of arrival and was outside Wainwright’s Bar, the bottom bar of the Bay Hotel, in good time and the young lady met me and said that they were about ten minutes away.  I got set uo with banjo and a copy of the words and waited..  “Here they come” the young lady said and I looked up New Road, expecting to see a great crowd of walkers but all I could see were three elderly walkers slowly coming down into the Dock.  I asked the young lady if they were the vanguard and she replied “No that’s it, there were four but one dropped out.”

Undaunted I started singing and playing but the three chaps didn’t seem that interested, all they wanted was a pint and to chuck the pebbles that they’d picked up at St Bee’s Head into Robin Hood’s Bay.

Eventually one of them did have a word with me so I told him I was the Bay equivalent of St Bees’ Brass Band.

He looked at me somewhat perplexed “Brass Band, no lad it were just one chap playing the trumpet!”

Anyway the song always goes down well in Bay Folk Club on Friday nights at Ye Dolphin were often there are Coast to Coaster’s celebrating their 192-mile trek across the North of England.

I accompanied this recording with a Banjo I made last year in my workshop to an experimental design made using 30 segments of ash and 3 paduak rings built to make up the banjo body, the neck is a traditional laminate form using a laminated block of sycamore with paduak and a paduak fingerboard.

Hope this fits the bill.

Doing the Coast to Coast 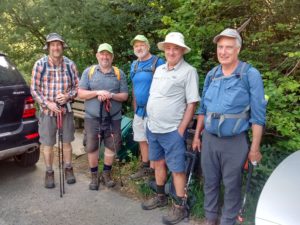 When you get to Keld you’ve reached half way
Through the Yorkshire Dales for the next 3 days
But the finish still seems far away
When you’re doing the Coast to Coast
The North York Moors with legs like lead
And it seems like years since St. Bees Head
But the sight of the sea gives you courage instead
And you’ll finish the Coast to Coast 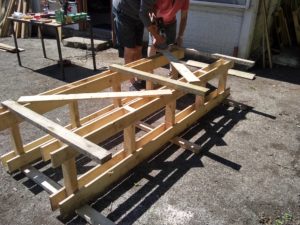 Working outside at Robin Hood’s Bay Shed at the end of the C2C!

One last thing to do today
Is chuck that pebble into the Bay
And give three cheers for Wainwright’s way
You’ve finished the Coast to Coast!

Here is Phil Smith’s spirited rendition about Whitby and its Sheds. Specially written folk number (a 1 minute short to suit the Frome Radio programme next week). Recorded and mixed by Phil Smith in his Sleights Recording Studio.  https://soundcloud.com/philtunes

Really catchy sing-along number. The words are below to sing along to!  Raise your glasses and your voices!!