NYCC Councillors over the past 6 months have visited projects in 7 areas. Projects with a different purpose and character.  In our neck of the woods it was SAMS/Whitby Area Sheds that was showcased yesterday in glorious sunshine. It was such a glorious weather day it prompted us to put up our Aussie sail to protect heads! (or to protect from an unexpected shower:-)).

The same morning, the interviews with Radio Tees the previous Thursday were broadcast. Listen to Linda (how’s that for alliteration!) and hear other Shedders too with a trailer for Staithes Sheds.

Notes were prepared to outline the story of SAMS, the Whitby Area Sheds and the impending Staithes Area Sheds.

There was an official photographer, Richard Jemison ,and we’ll have some good snaps to put here. (we hope!!). But these are 4 taken on a mobile phone, one as Graham drove to Littlebeck and felt inspired!!! 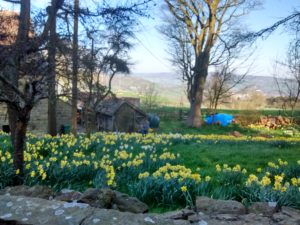 Look at this field of golden daffodils 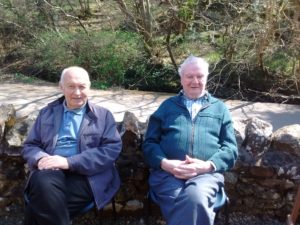 Shedders MalcolmP (left) and Dennis rest from the exertion of dominoes. They are a golden pair too. 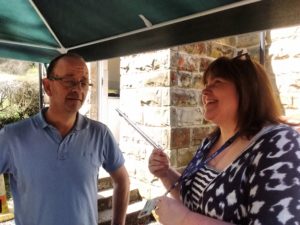 Shedder Lance is shown Liz Meade’s badge of  authority (her left hand). She is not holding a magic wand in the other – it is a handrail on the wall! 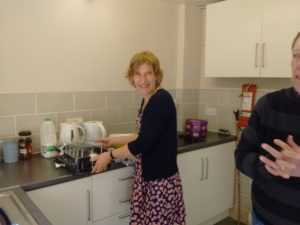 Always good to see NYCC staff , like Karen, serving a useful purpose in helping clear up. A golden moment captured.