Keeping more in touch now and in the future

The Covid lockdown has made us realise how important we are to each other. It’s true of our relationships with others.

Keeping in touch has become increasingly important and necessary over the past 3 months. Onto the scene has come videoconferencing (though its been lurking for a long time!). Seeing each other and sometimes as a group in our homes has added a wonderful new dimension.

We are almost set up now in Staithes Shed with full connection for videoconferencing and simply letting Shut-Ins see what is going on there.

We have the wireless broadband connection (see previous blog) and now we have coupled in a secondhand TV using Amazon FireStick. The TV monitor is a much larger screen and there’s access to many online offerings including YouTube and many workshop demos! 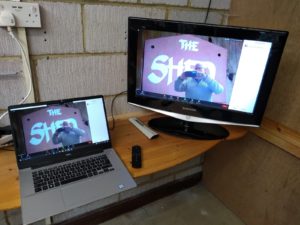 This was a Zoom session being set up

There is a wall mount for the TV to be installed and a camera with microphone on its way.  [arrived and tried ]

It is funding from People’s Health Trust for Staithes that has been used. We have applied for funding for the Whitby Area Sheds to have similar facilities. We hope to hear shortly whether we have been successful.

Each Shed can then communicate conveniently amongst it’s own Shedders but also there can be communication between all our Sheds and with the outside world of Sheds and other external relationships.n

Improving the neighbourhood in the proximity of Sleights Primary School

You may have seen the photo of the school railings being painted by staff in the previous post. In front of the railings is another rail on metal posts. Are they white posts or rust colour? The first photo was taken accidentally but it does show the condition of the posts before cleaning them up and painting with white Hammerite. 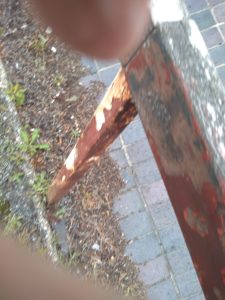 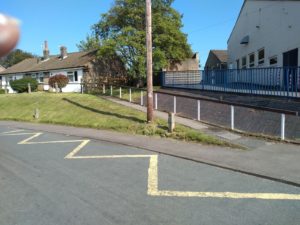 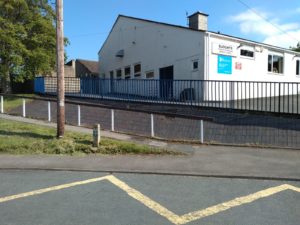 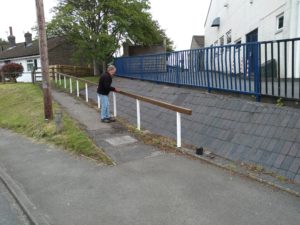 A resident from across the road called out from her top window, “You’ve done a good job!” That is what a community task like this does. A good job for all in fact. The painted barrier and the railings painted by school staff which started this, freshens the look of the school for youngsters; it improves the prospect for residents and passers by;  it kept two old boys occupied!

Whose barrier and rail was it? The School’s, Beyond Housing’s or one of the Councils? It’s not clear. But applying some paint we hope makes everybody happy.

In touch with a Postie

Graham had a lengthy insight into the work of postmen from Carl, standing in for the regular man. He values the people side of being a postman. He has many conversations with people who he knows are isolated and does his best to check up on them even in the pre-Covid days. A while ago he was delivering post and heard a faint cry for help from within. The door was locked but the woman inside called out the code for him to access a key safe. 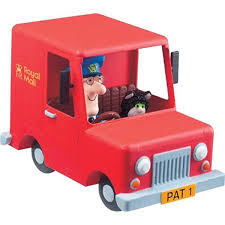 Posties are not supposed to enter houses for obvious reasons but he used his common sense and let himself in to find a lady on a cold floor where she’d been lying all night. Carl called an ambulance and the warden service and that was his added job done. He was commended by bosses (thankfully) for his prompt action.

He reminded about the service trialled a couple of years ago to use postmen to spend time to monitor and assist  residents designated as being vulnerable. It had been a real success and the Posties enjoyed being befrienders but, yes, there was no funding to continue it.

It was good to learn that many of the postmen, not just Carl, feel this incidental caring side of the job is very worthwhile. They help maintain our community and we are fortunate to have them.

Three cheers for our Posties!!

Our Shedders will need a training session on social distancing. Bring on the CATS 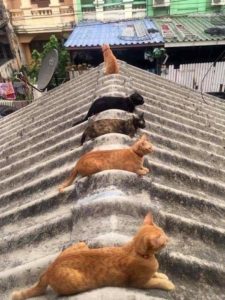 Of course there always has to be one non-conformist

The Compassion Project in Frome 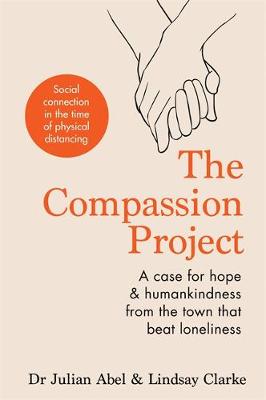 The book of the story behind Frome’s amazingly successful project is to be published on 25th June. A few of our Shedders and Shed supporters have been privileged to speak to people involved closely in it from the beginning, 6 years ago. It is a story of transformation at two principal levels – organisations and people.

What is seen now above the waterline of success was at the beginning seeds of a number of people who could see a similar need for compassion in their town. That means action on top of empathy and that beginning with sympathy. Compassion is the driver though because it brings about action.

We in Whitby District have a lot of caring and indeed examples of sacrificial compassion (look at the time commitment of so many involved in community based caring.

The main seed for Frome was Dr. Helen Kingston. Below is something she said about the spark of need that there had to be new way to address problems she was seeing daily. Helen was a driver but she encouraged and involved others who became trusted co-workers who worked together independently but, yes, indeed together.  They became the initial glue which became a community movement of many individual Community Connectors working in small but powerful ways to improve everybody’s lot.

So, here is that seed thought expressed by a GP Dr Ann Robinson in a letter to The Guardian newspaper on 14th November 2018. The dilemma faced by I imagine most if not all GPs:-

“In my GP surgery this morning, I had nothing to offer a significant proportion of the people I saw. People with lifelong depression, low self-esteem, agoraphobia and anxiety who have become socially isolated. An elderly man and a young mother, both feeling the effects of loneliness and lack of social support. A man in his 60s who has recovered from a heart attack but is finding it hard to motivate himself to overhaul his lifestyle by stopping smoking and starting to exercise and eat healthily. A young man who has back pain for which no specific diagnosis or treatment can be found despite extensive investigations. An elderly, frail lady who is so scared of falling that she’s become a prisoner in her own home.”

“Let us return to Helen’s vision. She had in mind a view of ‘a community where people are supported to be creative, active and resourceful in response to their own and each other’s unique and shared needs, and there is easily accessible and integrated care and support available to all.’

Such an approach would be less specifically targeted than the limited number of supervised sessions her team could offer.

Much stronger therapeutic benefits would be achieved by engaging patients in lively relationships with other people through activities, which would strengthen their personal and social confidence and thus help them to find their own solutions to the problems that troubled them.

It was evident, however, that such a programme would require the building of an interactive network of compassionate community resources, made up of both individuals and groups, who could support the transformation of individual patient’s lives.

For that, additional staff with the right skills of social organization would be needed and there was no scope in the Smallbrook practice’s limited budget to risk the cost of recruiting them.

The disparity between Helen’s imaginative vision of what ought to be possible and the constraints limiting her scope for action became increasingly frustrating. But when confronted with an unmet need, Dr Helen Kingston feels compelled to meet it and she remained unfazed by apparently intractable problems.”

The Frome Men’s Shed was established at the time Helen Kingston was embarking on here plan. It fitted well as a new venture in the scheme of things. Patrick Abrahams, the prime Shed mover, has been a valuable source to us of information on the Frome Compassionate Community project. We have seen for ourselves the value of Sheds in helping people help themselves as they help each other. Empowering.

The book can be pre-ordered through Amazon now as a hardback (£14.99) or a Kindle e-book (£8.99). Just search for the Compassion Project.  There will be some copies to borrow.

Finally, for this blog, a refurb on an old lathe by Graham, Bob and Keith plus a router table in the making for Graham’s “Shed@Home”! 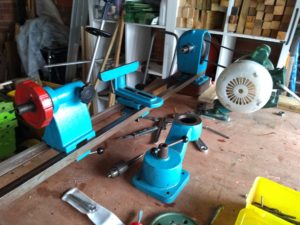 This came from a farm building on the outskirts of Sleights. We made a workbench to fit using one of the steel frames from 3 desks given to us a while ago by the Fire Service in Robin Hood’s Bay. 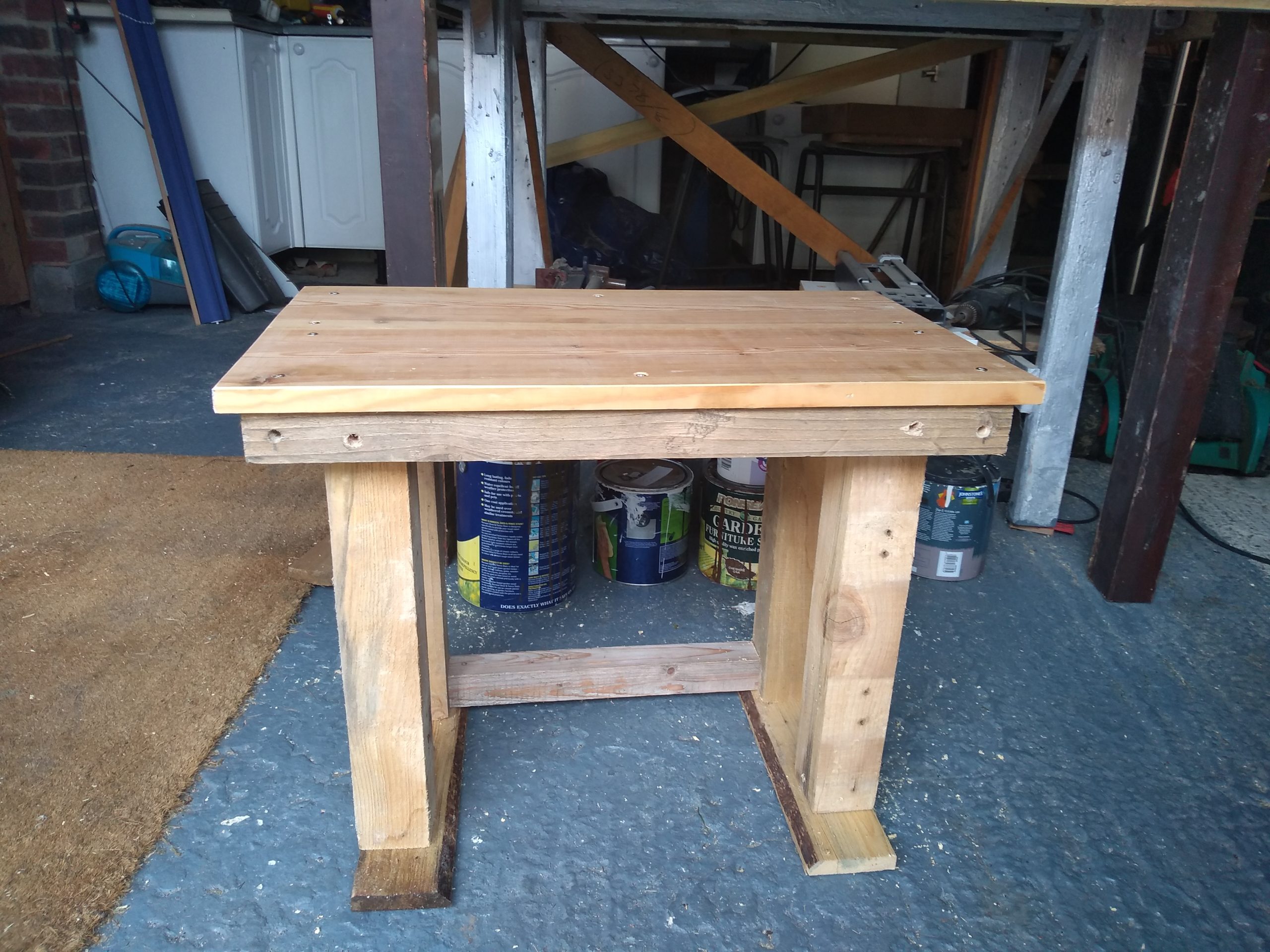 Router table. Router plate on order to be set flush with the top surface. Hardly cabinet furniture but it “looks” strong:-)