A pooch gate and a garden dig over with a story of collaboration behind it. 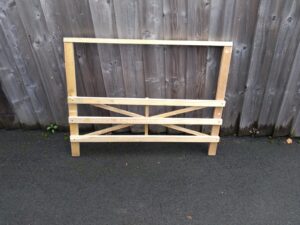 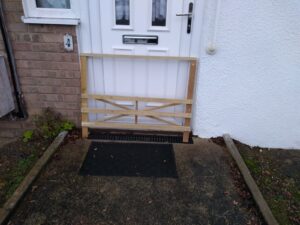 It is a barrier to a small pooch heading out the door. The top bar is a “handle” to move the gate. 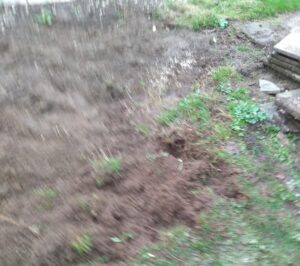 Digging over the weedy lawn to sow grass seed. It is a cold variety apparently!

The story behind the pictures . . .

It started on Saturday late afternoon, 6 days ago. An email arrived from a lady called Cheryl which said she was  working with Revival North Yorkshire, the organisation set up by Debbie Swales to host lunches with memorabilia in Whitby district, including in Sleights at The Salmon Leap.

Covid-19 saw Revival forced to stop gathered lunches and turning to distributing meals to their regular attenders and to new people. Also helping to do other tasks.  They used contacts to do some of the tasks and in Staithes the Shedders cut the large lawn of a couple and in Sleights Graham walked a dog.

Revival is, like Sheds, a member of the newly formed Whitby Community Alliance. The previous Tuesday Debbie had shared in an Alliance Zoom meeting that she had recruited two staff,  one of whom was covering  Sleights to Staithes and lived in Sleights.

The email from Cheryl said she’d seen the Shed banner for SAMS Shed on Graham’s gate and wondered whether the Shedders could help a new local lady with starting a garden makeover before the winter sets i n. Cheryl and a friend had started turning over a manky lawn to sow seed. The Shed agreed to help.

Where did Cheryl live in Sleights? On the opposite corner of the road to Graham and behind a tall, dense conifer hedge! She’d lived there for 18 months. We met on Sunday morning with Shedder Bob in Graham’s garage.

Graham tackled some digging on the Monday afternoon and discovered buried paving slags which he duly unearthed. The lady had a small dog and it had recently run out of the house having taken interest in a couple of other dogs across the road. Fortunately no bus or car was passing and a workman recovered the dog.

Cheryl knew the lady had been shaken by what might have happened and asked whether the Shed might make some kind of gate across the front door to prevent another adventure.

On  Wednesday, whilst at the Whitby Shed, Graham visited Boyes general store. There he was greeted by a masked lady who said “Hello Graham”. Graham peered at her eyes and realised it was Sue, one of the weekend night-time Street Angels in Whitby. “Are you helping a friend of mine with her garden?”, she asked. Yes indeed! What a small world. It turned out they had been friends for 30 years.

On Friday the gate was made and taken to the lady in the afternoon and Graham dug some more till, surprise – surprise, it started to rain.

In under a week Graham had made two new connections almost on his doorstep, helped the lady practically and  began to tick a box for Revival North Yorkshire.

This connects well with the new Compassion Project for Whitby district. People being good neighbours to strangers.

The really good news is that the lady is helping to connect with other local people as her community contribution which is what we all want to happen. Doing what we can for others.

Here is something to try from Staithes Shedder Malcolm

Just for info, I’ve used this before, quite useful. The Cutlist Optimizer. For instance, this project I’m constructing, there’s over 2 dozen different panels/pieces to be cut from 3 sheets of plywood. By inputting all the panel/pieces into the optimiser, it sorts them all out with minimum waste and even gives a cutting order. You never know when you may be able to usefully use this.

Whitby District Sheds is exploring with North Yorkshire Youth the creation of Youth Sheds that provide a form of junior apprenticeship. Once a week, after school for a term. Extendable term by term up to one year.

Learning to handle Shed hand tools first and progressing to larger equipment. All under supervision.  Groups of 4 probably. With the equivalent of 5 Sheds (one on Whitby East side) at any one time there can be 20 young people involved and possibly 30 different young people in a year.

For upper end of Primary School age (10) to lower end of Secondary (14). The Youth Sheds will require volunteer to run.