It takes the biscuit

Have you ever taken a screenshot at the wrong time? We had a Zoom cookery session. Rachel Meadows, new Volunteer and Community Development Manager for UK Men’s Sheds, joined to see with disbelief what we were up to.

Look at Rachel’s eyes, she can barely watch the scene. Rob had taken his offering from the oven and was about to sample his wares when Graham decided to record the event with a screenshot.  It was only when Graham posted it to this blog that he realised both Brian and Phillip had vanished the scene. Absent friends.

We had a good chat with Rachel.  What she made of us goodness knows! She lives in the Wirral and at the end of our conversation it transpired that she and Philip used to live in the same road! Not at the same time, however. 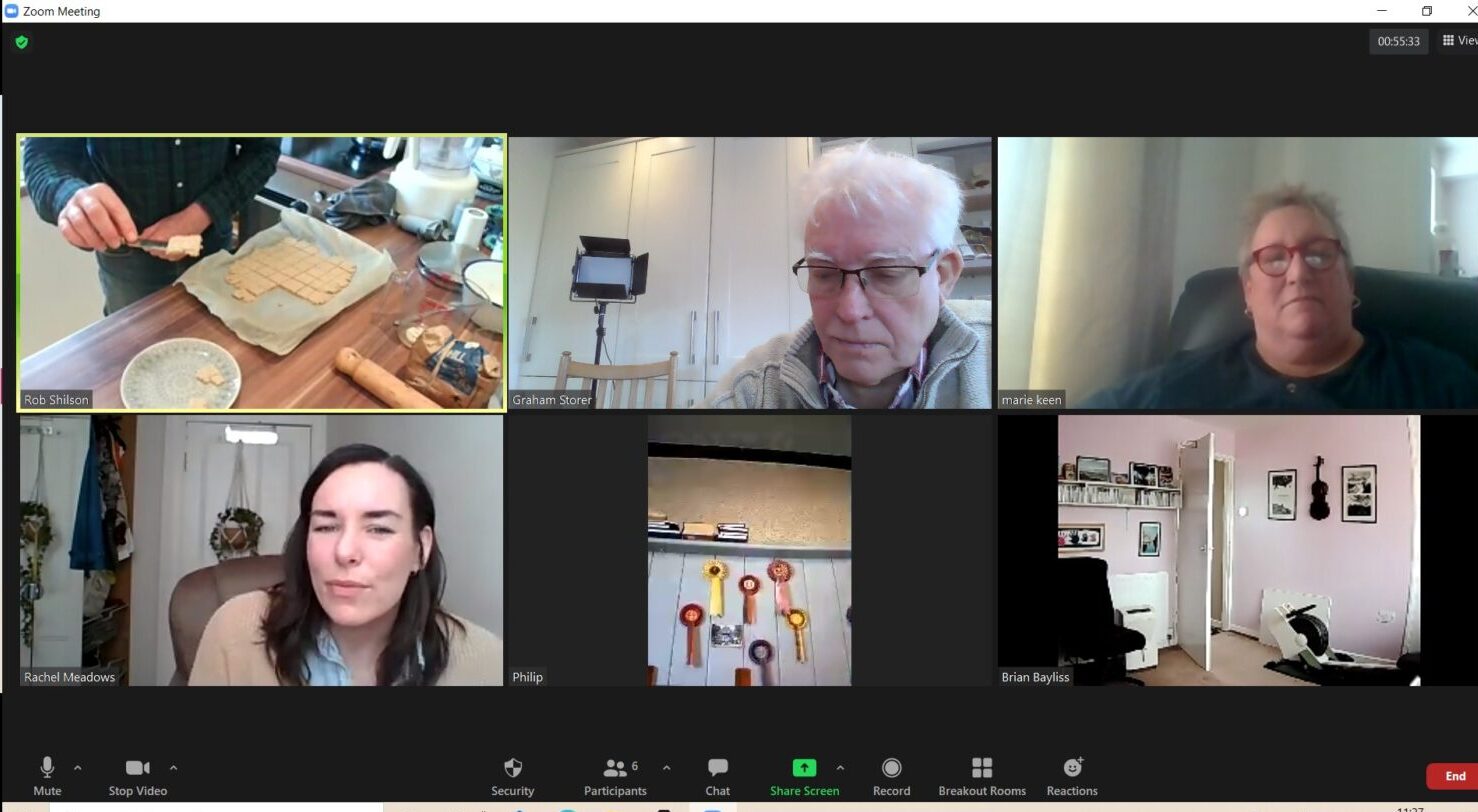 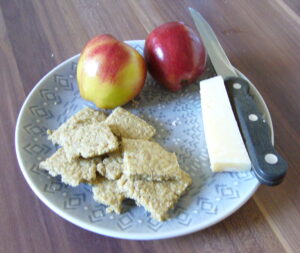 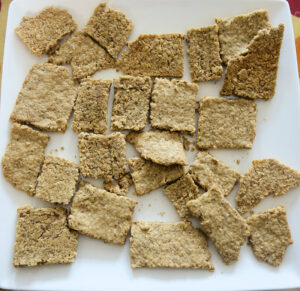 Rob reported later, “A healthy snack after a sunny but very cold walk. They were good, I went back for more!”

BrianB’s official statement was, “They look not so good but they taste o/k .”

Graham said, “At least mine are round.” 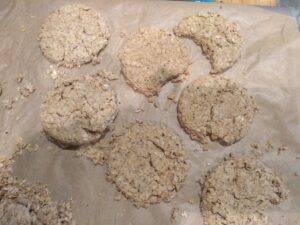 That evening Graham added cheese and pickles to a couple of mis-shaped oatcakes and was pleasantly surprised how tasty they were as a snack!

Some Shedders are aware that Whitby District Sheds has joined forces with others to provide some holiday activities for young people over Zoom. It’s an interesting challenge. It is intended to be live but (in our case) with some pre-recorded video in a Shed. The tasks the youngsters will engage in is basically the assembly of pre-prepared components using wood glue, panel pins and small screws. We are tackling two projects 1) Rustic Chairs for Teddy Bears (there are other soft toys too!) and 2) making bird boxes.

Graham & Bob have planned for “entertainment” but also want to educate(!) by showing how the parts are made and prepared. The chairs involve mortice & tenon joints (male and female as they say) between 25 – 30mm  hazel sticks (slightly smaller in diameter than Bob and Malcolm usually use for making walking sticks).

We lit the lathe in Sleights Shed (the lights), used a mobile phone (the camera) and did some action as we used imagination to video the main steps involved.

So here is our first attempt – the only way  is up next!

Hardly a masterpiece and there is more to add. The aim was to explore approaches and grab some “footage” to play with in the video editor. We were pleased with the lighting and no cast shadows in a rather dismal (and cold) Shed:-) 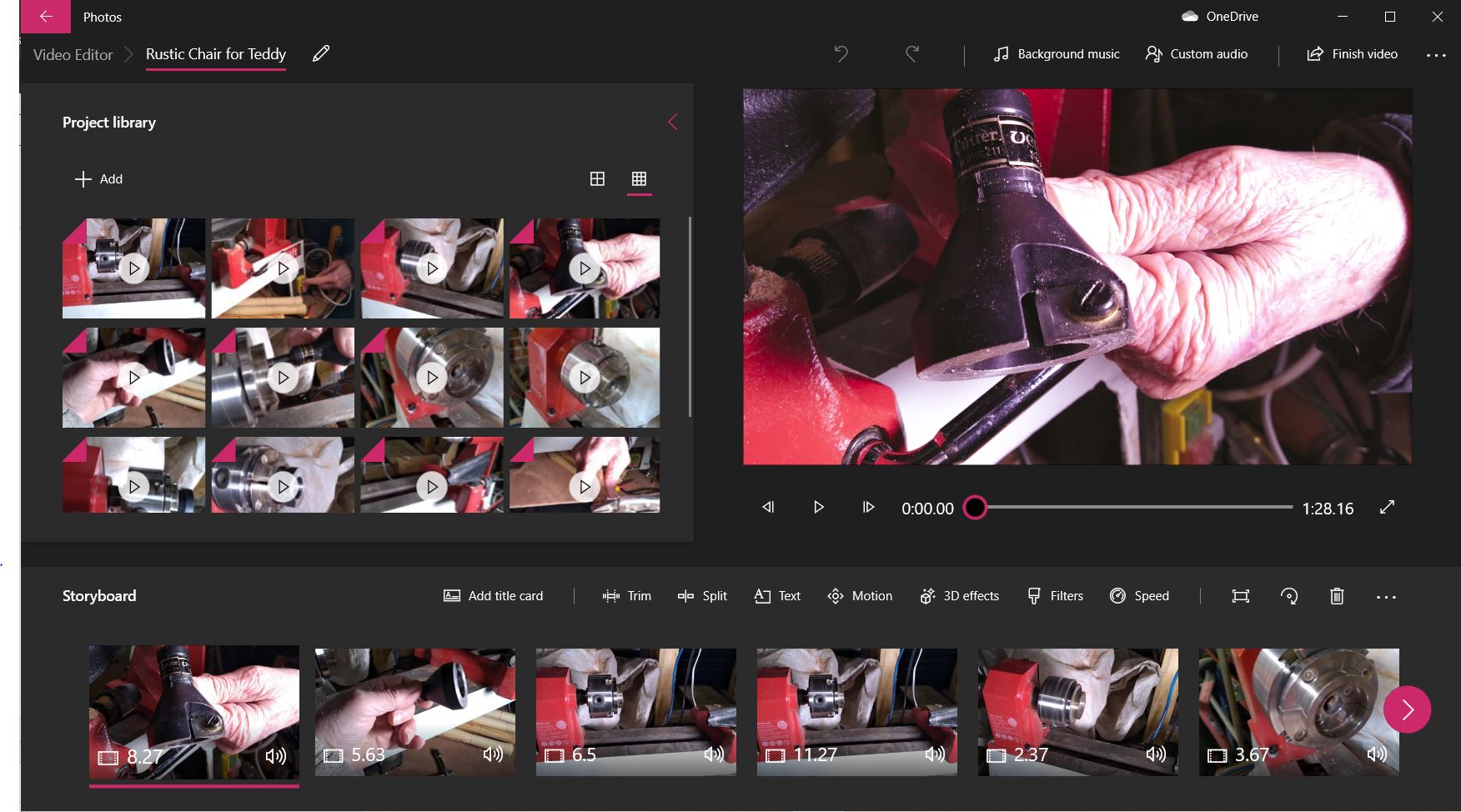 This is the Microsoft Video Editor that comes with Windows 10 as standard. Top left is an array of short video takes downloaded from the mobile phone. These are taken and inserted into the Storyboard strip at the bottom. Each video take can be trimmed at the beginning and end and split also to remove frames in the middle of the action. Finally, top right is the resulting overall video post editing. This can be exported as a video .mp4 file (as above).

Discovered limitations of the  free video editor being used

It was a Microsoft product that was discontinued two or three years ago. Now using a low cost (not free, though free to play with before purchase).  It is Windows Video Editor 2020.

Here is version 2 of the Mortise & Tenon video. Still more to learn:-)  Best expand to fit the full screen using the right hand box-like symbol that appears when the cursor hovers over the bottom of the video screen. 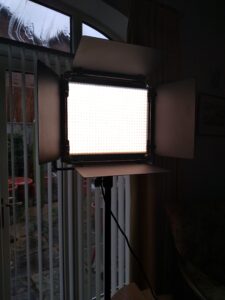 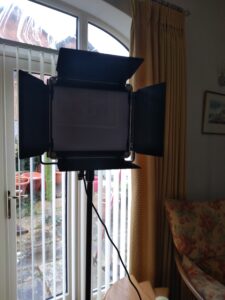 Natural light is normally the best (so I read) but a Shed is not the brightest of places (unless you are at the BayThorpe Shed!). Use of two LED lights arrays allowed us to get clear images with no shadows.

Here are the lights we used by Neweer.  They are about 250mm in width. There are yellow LEDs and white which allows mixing to produce warm and cold lighting. Filming in a lounge requires more yellow emphasis and in a doctor’s surgery (they say) the clinical white. All about feel.

Shedder Malcolm has been perusing the web again . . . . .

His first offering is a cautionary video for our cookery Shedders on a Thursday morning.

The second is not for those of a nervous disposition. It might be used to promote the message of “stay home”.