Home General News Getting back to normal conversation

Getting back to normal conversation

Having spent two weeks away visiting cold places overseas, it is time to get back to normal and talk Sheds. It might not surprise you that Graham had not totally dropped the subject but shared what Sheds are and what they can do for people with all and sundry:-). We have mixed with a lot of Americans about Sheds (or shops in their language) and community Sheds are an unknown phenomenon.

The most unexpected conversation was with US immigration as the ship we were on moved into a port north of Boston. We presented ourselves in front of a Homeland Security officer. They are not renowned for their humour normally. It was a female and we duly went through the process as she ascertained we were leaving the ship in Boston. Are you spending a few days in Boston?, she asked. Graham responded with a no, because he needed to get back to work!

She made the mistake of asking Graham what work he did – you can guess the answer – Sheds!! Explanation was required and given to which she said, “That’s awesome. I’m an introvert really and have my horse and dog for company. I don’t know what I’d do if one of them died”. You’d need a Shed, Graham said. 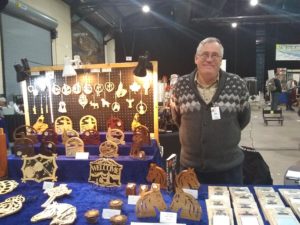 John, rescued by his jig-saw

We purchased a couple of jig-sawed lighthouses in Sydney for our grandsons. Not the Sydney you are thinking of but in Nova Scotia. In conversation with John who made them he said that he was rescued from depression by taking up the hobby. We discussed scroll saws. 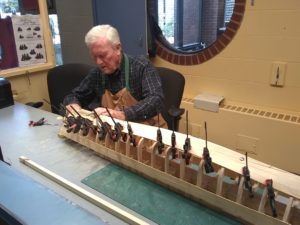 We also visited a museum in Halifax (not that one!) and saw Tom at work as a living exhibit. He was making a ship but ever willing to talk – tourism is important to small places (including Whitby) and many people participate in voluntary work to benefit the town’s economy.

Today we participated in a treasonous act as we tossed tea into the harbour at Boston. It was part of a re-enactment of events that led eventually to American independence. It involved a little role play and a lot of noise! It was no Tea Party.

We saw these seats dotted about all over town in both Sydney and Halifax. Gaily painted. I wonder if we could first make a prototype and then cost up such seats for dotting about odd corners n our rural communities. 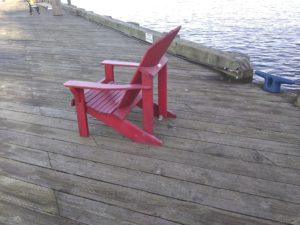 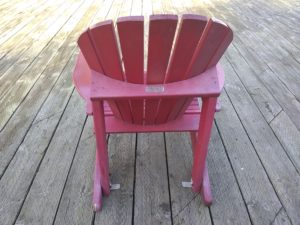 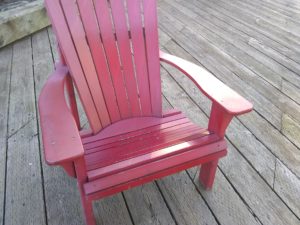 Meanwhile, what was going on back at the ranch? Tonight in Boston Airport I received an email from a lady in Blythe, Northumberland. She is offering us around 60 ram’s horns! How come? Adele had seen Look North and the SAMS Shed. in Littlebeck. It was filmed on Thursday because Look North had seen we were in the finals of NYCC’s Community Award for Best Group. How news travels!!

Roger had emailed earlier the result of the Awards and we were runners up to a Library ++ project in Ryedale. To be second out of an original 40 nominations is beyond our expectation, and this on top of Two Ridings’ High Sheriff’s Dragons Den the week before. There are a couple of short films to put up in the next few days. 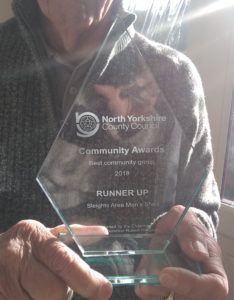 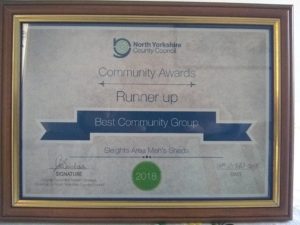 A certificate to hang at SAMS

A bag of rams horns.

Prior to rams horns there is the offer of knitting machines this week and some tools too. More on this shortly.

My thanks for those in the various Sheds (4 to become 5 in a week’s time) for keeping the Sheds on an even keel (at least no bad news has been passed on!). The Sheds are shared enterprises where those who come are volunteers and beneficiaries. Brilliant Shedders! You have made the Sheds.