But not just children. Adults too. And it is worldwide. According to a World Heath Organisation (WHO) report summarised on BBC news.

“Four in five 11- to 17-year-olds around the world are not taking enough physical exercise, according to the first such analysis.The World Health Organisation says children’s health is being damaged as well as their brain development and social skills. It says failing to take the recommended hour a day of exercise is a universal problem in rich and poor countries.”

Pretty much anything that makes the heart beat more quickly and the lungs breathe harder.

The target is 60 minutes of moderate-to-vigorous exercise a day.

The difference between moderate and vigorous is you can still have a natter while doing moderate exercise but vigorous exercise would leave you too breathless to chat. 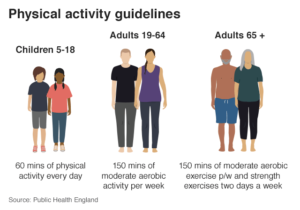 The above gives indications for us adults too. 150 minutes moderate exercise per week plus strength exercises two days a weak.

One of the key outcomes is that we are all (kids to adults) doing too much sitting/couch potato work and not enough “hunter gathering” as our ancestors did. The car, television and now social media have a lot to answer for.

The report refers to “entertainment” being so widely available – effectively watching – and not enough to make any of us draw breath. The concern is that children know so little else.

The BC summary is well worth looking at and then pondering on. What can we all do to reverse the trend? It does involve us all in creating a common healthy culture.

PS. A big hand to Whitby Eskmouth Scouts in Sleights and the equipment they have.