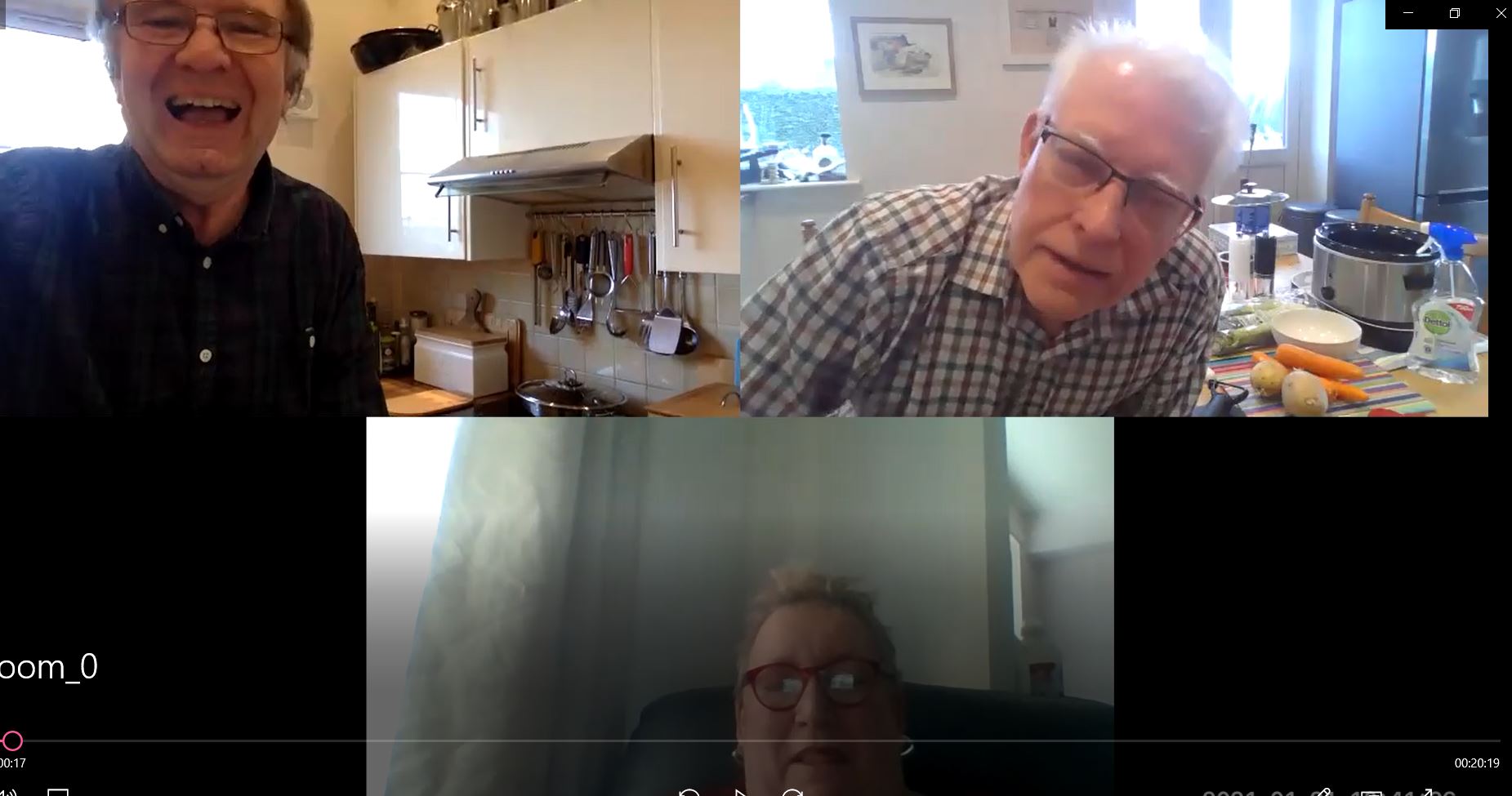 In the Soup Challenge, one of the three contenders, Shedder Brian Bayliss fell before the starting line. He had to pull out from being on screen because of water ingress to his garage. He found it when he went to get potatoes for his soup. He did, however, carry on later and we hope to have a photo of his result.

Meanwhile Rob Shilson (the smiley one above) and Graham (alert but not smiley) prepared themselves under the watchful eye of the third shadowy figure in the picture, Shedder Marie Keen.

Rob is seen above taking stock of a foil wrapped cube. Marie took him through reading the small print on the box to see that one cube made half a litre of stock. One litre required two cubes she explained. Rob thought about the maths behind that.

Graham was fiddling with leeks and a knife. He learnt to cut open the leeks to wash out any soil grit. Yes, there was some. Chopped up and in the pot. Rob also added some celery (below) to the pot which is a twist on the recipe. Graham had read about prunes being added, but chose not to stray from Marie’s recipe.

Here are the results after a few hours of slow cooking in the Crock Pot. 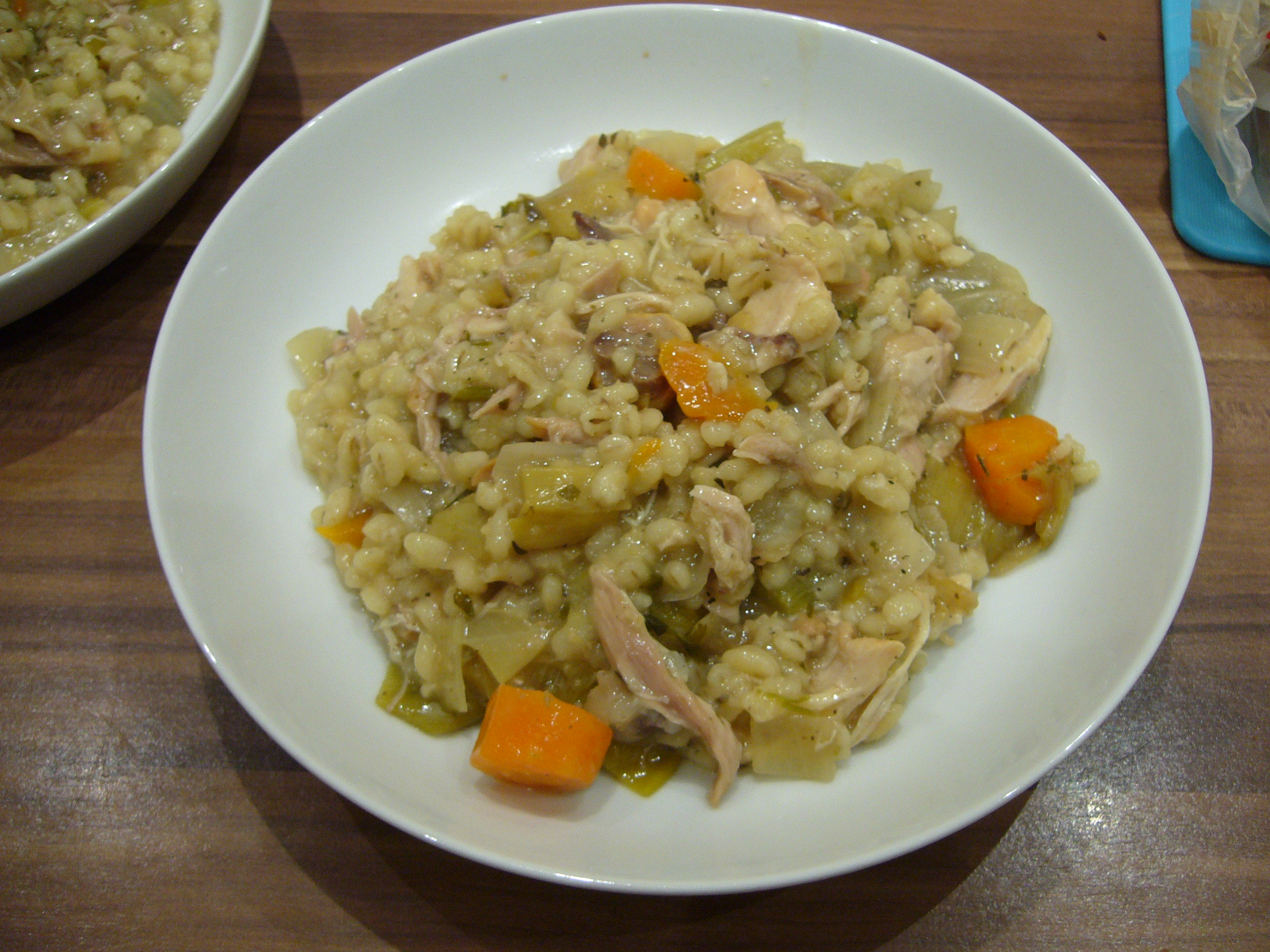 Rob says, “Quite thick and more like a stew than a soup. I think the barley has absorbed all the liquid. Tastes OK though.” 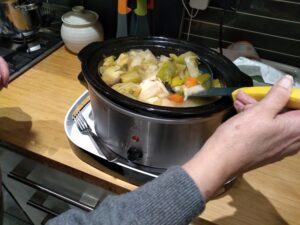 Lots of liquid in Graham’s pot at the point of serving for dinner tonight. 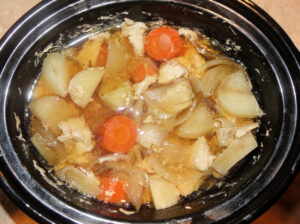 BrianB says, “Well this is my effort, I had some last night & it was OK ( no ill effects !). Perhaps a bit less stock & less cooking time. I also would like a Haggis. I used to eat quite a lot when I lived in Knaresborough. looking forward to Sat 3pm.

Why was Rob’s rendition short of liquid and Graham’s like a lake?  The answer lies with the pearl barley in Rob’s. Graham substituted potatoes (with the judge’s approval) because Graham’s wife is not keen on pearl barley. Graham did it for love.

From the judge’s chair

Marie thought it had been quite entertaining to see Rob and Graham taking the cooking so seriously. She was encouraging that both novices should keep it up. Rob had raised that Monday is Burn’s night. Time for haggis. We’ve managed to secure some local haggis from Jackson’s in Ruswarp. Tatties and neeps to be added. We look forward to that.

Betty could not join BUT she did the soup on Friday!

“Feel free to use vegetarian haggis if you prefer, which you can find online. Tatties (mashed potatoes) don’t usually contain spring onions, so omit them if you like. ”
SERVES 6   Proportion ingredients according to servings
COOKS IN 55 MINUTES
DIFFICULTY: SUPER EASY

To prepare: Haggis is sold cooked and just needs to be reheated. 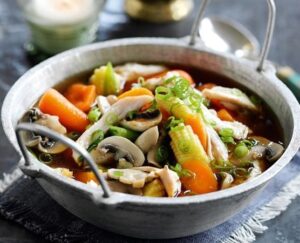 Place the chicken & in a bowl, stir in the spring onions. Add the ginger, mushrooms & soy sauce, mix well & set aside. Pour the stock into a large saucepan, add the carrots & bring to boil. Add rest of the ingredients & simmer for 45 mins – 1 hour until cooked.

Can be frozen, use within one month.

Additional notes from Marie that could help

Just a few hints for this soup if you are making it this week. If you can’t get all the ingredients here are some alternatives:

Spring onions – any onions will do

Mushrooms – any variety can be used

Ginger – if you can’t get a piece of fresh ginger you could try paste.

If you want to serve this as a meal, you could spoon it over some boiled or fried rice.