I am going to share with you today the story of my ordeal with mental illness and anxiety. I am going to be frank and totally honest about it but, ultimately, it is a story of rebirth and hope.

Approximately one year after going blind, I was attending Bolton College. My social worker found me a place on a cookery course for the blind. Things were going well and I was really enjoying it until, one day, everything changed just as if someone had flicked a switch. I began to feel unwell. My tutor noticed I looked a bit ‘peaky’ and asked if I was okay. I told her that I felt sick and could she help me to the bathroom. On my way, I had a panic attack and vomited. What the hell was going on? I had never felt like this before and asked if I could go home. A taxi was booked and off I went.

This was the start of what was a truly terrible time for me and my family which was to last approximately four years. My descent into the abyss of poor mental health was nothing short of brutal and debilitating. Out of the blue, day or night, the sense of anxiety and panic would render me incapacitated and sick to my stomach.

The symptoms I experienced were varied but all seemed to go hand in hand with one another. The first external sign my mental health was suffering was feeling nauseated and sweaty. My chest would tighten, my muscles would spasm and twitch. Also, my throat would feel dry and constricted and often I would experience diarrhoea as well.

The one aspect of my mental health that wouldn’t leave me feeling traumatised were the hallucinations. I found these fascinating and as real as you could imagine. I used to ‘see’ the taps running in the kitchen, cutlery and crockery sitting on the kitchen worktops and, when I was outside, I would ‘see’ birds flying. These hallucinations didn’t make me feel unwell and it was just my brain trying to readjust and process the loss of vision it used to act upon.

I had a support worker, at the time. A guy called Dean from Wigan. He would come twice a week to get me out and about. Shopping, visiting the bank etc. Some days I was too unwell to leave home and on others, we would make it out somewhere only for me to have an attack and need to go home.

“I did consider suicide. It would have ended the misery but I knew that I didn’t want to be without my family and my young son”

At my lowest, I did consider suicide. It would have ended the misery but I knew that I didn’t want to be without my family and my young son, Charlie, who was 8 years old at the time. I am so thankful that I decided to hang around and tough it out. It was obvious that I needed help so a visit to the doctor had me prescribed with tablets, which I still take to this day. Secondly, I received 12 sessions of bereavement counselling by the Royal National Institute of Blind People (RNIB). This was a huge help and we were able to address my mental health problems. I still remember my counsellor was called Marius and I can’t thank him or the RNIB enough.

Slowly but surely, after what seemed to be an eternity, I began to notice a change. I was actually beginning to have more good days than bad ones and some of the ‘old’ Chris was on his way back.

My story may resonate with quite a few of you who are reading this and my heart goes out to you. Take it from me that things do get better but it can take time. UK Men’s Sheds Association could well be your starting point for embracing life again and having someone to talk to and confide in. Please know that you don’t have to do it alone and I urge anyone who is feeling depressed, anxious or alone to ask for help. My life is amazing now and yours can be too.

“things do get better but it can take time”

Just get things off your chest as quickly as you can and seek professional help if you need it. You won’t regret it and you will be on the road to happier days and positive mental health. To find out about what I am up to visit my YouTube channel or my Website. Until next time—Keep on turning! – Chris Fisher RPT

This man is incredible in what he does and this account is what has made him what he is, not forgetting his supportive wife and family.

Here is what Staithes got up to today. 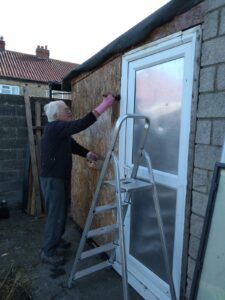 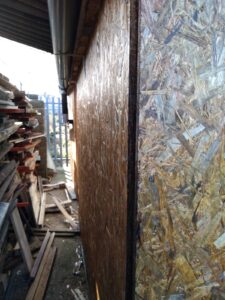 View down the long wall after waterproofing 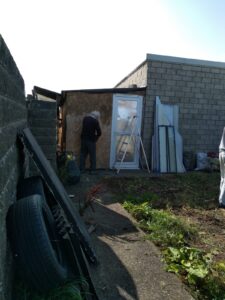 The photo does not do justice to the area to the right. It was cleared of strewn rubbish. Thinking about a veg patch!