Thursdays child has far to go – but not now we have Sheds at Staithes, Whitby, Littlebeck and BayThorpe. 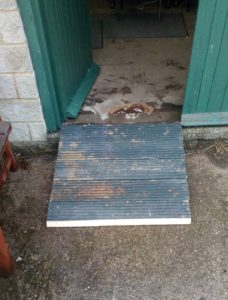 Ian Lawson is the man to use at present and we are thinking up how best to accommodate him. He has an amazing can-do spirit and a delightful twinkle in his eyes that spell mischief (we think:-)).

Brian1 (the tall one always a Holliday man) sent this message which is more exciting than this photograph.

“I took a video of Ian going up the ramp but it’s too big to send through email. [we will get it another way:-)]

His first attempt at going up it was a bit scary as he started to tip backwards, Brian 2 coming to the rescue & me thinking I’d made the ramp too steep. Only for Ian’s wife to ask if he was as far forward in the chair as possible, turned out he was slightly reclined which led to him toppling.

Phew! Panic stations I imagine but Ian lives on the edge anyway. I suspect he was with the SAS and not involved with DAG!

At Littlebeck they set to constructing 3 planters fashioned as wheelbarrows. Items for sale. The parts were cut working outside on a nicely sunny day with assembly and treatment next week.

At BayThorpe Shed a sample storage unit on wheels was made to go under a long worktop. Two or three more to buy. The worktop is freestanding on pedestals which can themselves be used internally for storage. Take a look. 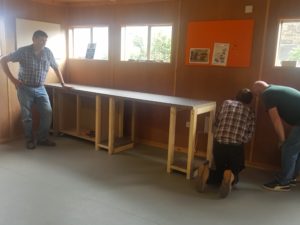 Worktop assembly. A similar length to add. Note workers and manager in a traditional pose. 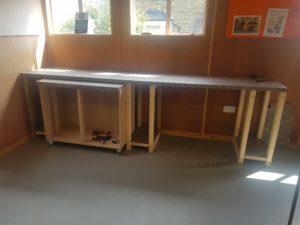 A storage unit on wheels slips underneath. Doors to be added to unit and pedestals.. 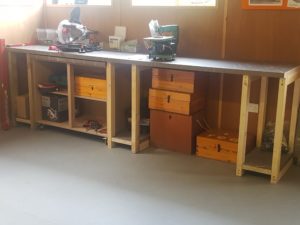 Moved stuff back to await the next session.

In a branch meeting (!) the BayThorpe Shed adopted a straightforward constitution based on the Charity Commission’s Small Charity Constitution and 10 names were added. Two or three attenders were not present but their signatures can be added.  The objects of the charity are as originally stated  for Sleights Area Men’s Shed (but adapted to say people now and to cover Fylingdales). See the objects at the bottom.

We had a delightful lunch provided by Elaine who says the way to keep men working is to feed them. The atmosphere was great as Shedders got stuck into the furniture whilst others were tackling the weeds again in the courtyard area.

The aim is to get workstations that can be “vanished” within the storage unit as a first priority and then follow with the fold out Scout leaders’ room and additional electrics. We are to work two days a week (Monday and Thursday) with Shed formal opening in mid-September.

The BayThorpe Shedders are seeing the Shed materialise before their eyes, physically and with respect to supportive friendships. The banter is being refined too! That is a thermometer of Shed health in any of the Sheds.

To cap it all, Danny has been “volunteered” to make a replica of Jules Verne’s Time Machine – more than a bit like a Santa sleigh!. It’s for the Christmas Victorian Weekend in The Bay.

There’s a bunch of Shedders ready to join in with Danny once they know what it is. The illustration shows it. 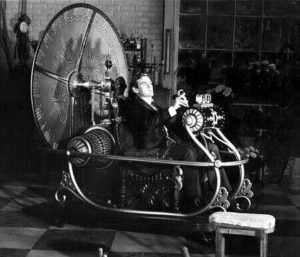 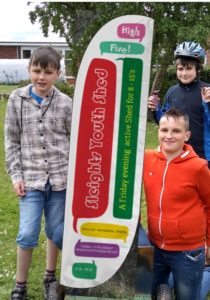 Just to keep Shedders up to date with our work with children and young people, the Kidz Making Good workshops are going well www.kidzmakinggood.org.uk.

Sleights Youth Shed will be starting in later September and there is encouraging local support and help is being offered.

There will be a new Youth Shed web-site largely managed by youngsters (we hope!) and with content they mainly provide (we hope!).

There is a news item on this in this week’s Whitby Gazette, as below. 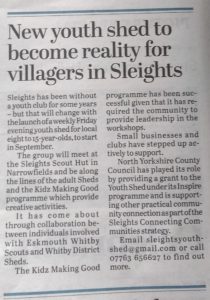 The intention in the longer term is that the BayThorpe Shed will become a registered, independent Charity as Whitby Area Sheds and Staithes Area Sheds have become in the past year. One step at a time though.