.. .. and there was after the 2 Olly’s had connected them up and we can now see what were doing.Dick ,Olly and Chris celebrated with a cuppa and Dick brought more fruit from home. 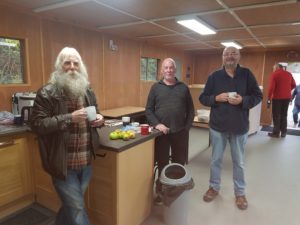 Danny popped in to see if we could make use of an old shower screen and drew up an idea for a bench cover outside, which Simon and Joe set to work on. 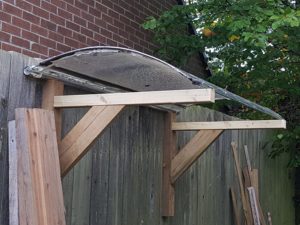 Here it is in situ , just a bit of guttering needed now to stop drips of rain going down their  necks. 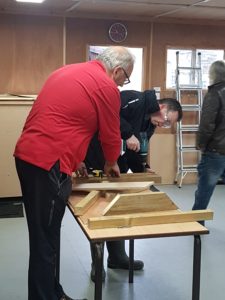 Dick brought the repaired bench leg and got busy with the angle grinder, there’s a good piece of wood that needs a little work  for the seat. 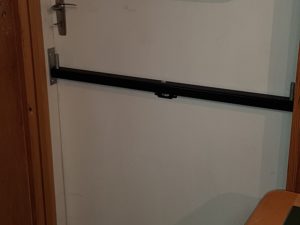 Olly finished off the strengthening bar on the back door.

A local chap arrived looking for Dick, he’d found a very old shoe hidden away in a cottage, either a child’s or a petite lady. It’s now heading for Bay museum. 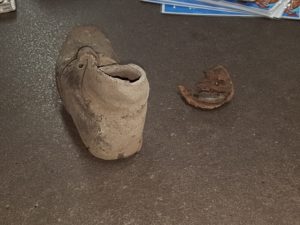 Late on a young chap, came in . He was keen to know what we were doing and very openly told us that he was a ” struggling” person and was going to look for a Shed in his area.

He went on to tell us of his unfortunate start to his short break from his home in Leeds,  arriving the day before his clutch had gone on his car and wouldn’t be ready til Friday when he was leaving. Two cups of tea later, with information on Sheds, the Cinder track and various local info, he left us, offering a donation (which was refused).

Says it all about what we’re doing doesn’t it ?

[Reporter on the spot, Elaine]