This blog is aimed at showing that the brain cells of Shedders are still bouncing off each other! We’ll add accounts on each Shed and goings on as they arrive from the distant parts of the known empire in Whitby District!

We start with something that the Sheds have made a considerable contribution to without knowing unless Graham gossiped with you using the F-word. Yes Frome, 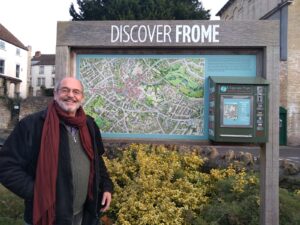 Most of you will know that through the UKMSA we got to know Frome Men’s Shed founder Patrick Abrahams. He came to national Shed prominence through the weekly series of Shed Happens radio and online broadcasts when lockdown arrived. Whitby was mentioned a few times in those!

The Compassionate Community project in Frome (as it came to be named) had a markedly positive impact on community appreciation between residents beginning in 2013 – in a similar way (but not the same) as has happened under Covid-19 in most laces including Whitby district.

The From project has been acclaimed for its achievements – internationally – but the engine of what was done was ordinary (or extraordinary) local people of all sorts. There was a driver and crew on the journey which was a doctor in the Frome Medical Practice and a number of people and voluntary projects who worked together to achieve positive change across the district.

Here, Whitby Community Alliance (WCA) has been formed, an alliance between essentially voluntary (as opposed to statutory) organisations. It was conceived just before lockdown so it is not a reaction to Covid-19 but the pandemic has accelerated its development and collaborative strategy – helped by Zoom!!

WCA is an important component in bridging between organisations not only in the voluntary sector but with statutory bodies too.

The vital community heart in Frome was achieved through 3 things:

It is this “chain” that is to be explored, we hope, in a new project contributed to by Sheds (most certainly we hope) but separate to Whitby District Sheds in terms of responsibility.

No more explanation. You can read a book “The Compassion Project” published recently  (£12.53 on Amazon) but there is a recent blog on this website that includes the main points and a couple of relevant sections from the book :

I am happy to disclose more in 1:1 chats (awaiting approvals of some participants to be public). What I can say is that (at present!) what is happening is exceeding my expectations or even hopes. One key (in my view) figure wrote “such a simple idea but hugely effective”. Another at a similar level but in another field said “The time is now and this is a must.”. There are some geographical clusters of interest coming together which is needed to start it –  ultimately it must spread organically, bottom up. Just like Sheds!

Sleights Area Men’s Shed is on the move.

It was the first Shed of course, down in Littlebeck valley in the schoolroom of the Methodist Chapel and in an annex in the grounds of the estate owned by Julia and John Weeks. It was FOC. The Annex held the most antisocial equipment (not so sure about the people who popped over to use it!).

For very good reasons indeed, the privilege of the Annex is having to be withdrawn and the machine workshop emptied. Not overnight – not eviction! – but gradually stripped out. We greatly appreciate John & Julia’s support of the Shedders (and putting up with Dave!). Without the Annex – a place used by woodcarver Whittaker of Gnome Man signature fame – we would not be where we all are now.

Other premises for a machine shop close by are not available. The schoolroom itself is becoming more a multipurpose room as part of the Chapel’s service to the community; for SAMS to serve the Sleights community as a typical Shed for distraction we are looking for premises in Sleights itself. Ideally so men and women can walk to it or catch the 95 bus to somewhere near. 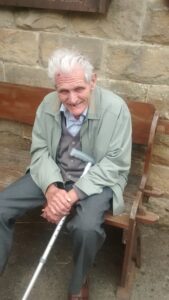 It is even truer of Littlebeck Methodist Church that without their agreement in 2015 to house the Shed (nobody including us knew what a Shed really involved) we would not have got as far as John & Julia Weeks! Littlebeck has been a magical place. The Coast to Coasters were a source of joy and donations to the Shed. Sometimes there were mixed groups of walkers from different countries. Sometimes USA and Australia.

We’d say to the Aussies, “Do tell our American cousins what all this is about!“. We lured walkers in with offers of tea and coffee, and for the women a toilet:-). Shedders played roles, just like in Ambridge!

We won’t forget the late Bert from Glaisdale who hardly said a word and did nothing. He did tell one or two good stories of his apparent former life and his wife benefitted so much from the respite. And similar respite for other Shedder’s wives.

So, whence goeth SAMS? The “usual” Shed will meet when we reopen (following the guidance) in Graham’s garage and in a closed gazebo on the front of the garage. The amazing thing is that the garage was sorted out by Bob and Graham for themselves during lockdown. Selfishly for then and Alexa! It had been crammed with rubbish (that might come in handy one day) since it was originally used to build the famous “Big Green Box” awaiting transfer to Littlebeck.

Thus, for now, we return to our origins in Sleights and welcoming one or two new people maybe, introduced by the Link Workers or Living Well. That is the purpose of the Shed, restoration. 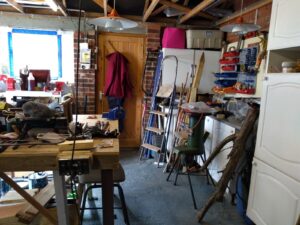 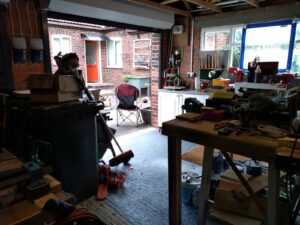 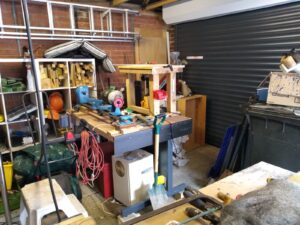 OK, yes. Still some way to go but the shovel is ready for snow:-). Bob has turned his hand to stick chairs for soft toys. Or rather for Graham’s wife for her soft toys. Here is a cheeky monkey. There’s a slightly bigger version Bob’s working on to be a naughty chair for Graham. 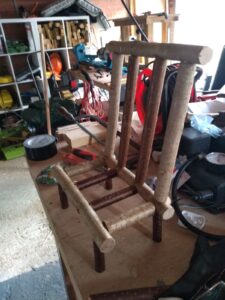 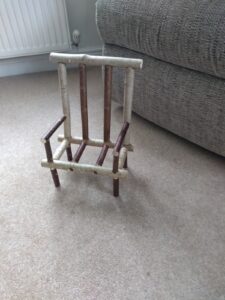 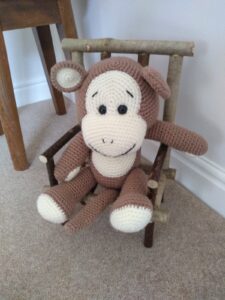 Interoperable is a term for interaction within computer systems or software meaning the ability to exchange and make use of information from different systems.  We like to think that our Sheds can be interoperable and be able to work between Sheds. We have a good foundation for that because we believe the Sheds share a very similar ethos. 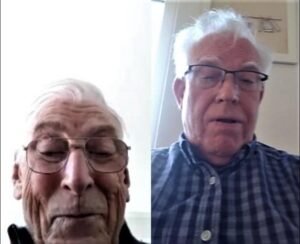 Big Col and Graham on Messenger.

In Staithes we have installed the capability for us to look out to shut-in Shedders, to join Skype, WhatsApp or Zoom meetings internally or externally AND for people to look in on us. Our local Sheds but in principle any Sheds and more importantly prospective Shedders introduced to us by referrers.

We want this across all our Sheds and it is straightforward to do (in theory and sometimes in practice).

We need two redundant flat screen TVs as monitors. If you have one or know somebody with one  in their loft or garage, we may well be able to use it.  About 32″ for mounting on a wall bracket. We’ve put a call out to Whitby Freecycle too.

We’ll soon all be able to join up and even talk to Aussie Len over his evening BBQ!

Last week the lads cleared many of the weeds in front of Eskmouth Scout Hall.. This week Betty and Graham completed the work with weedkiller and broom (which Betty flew in on). 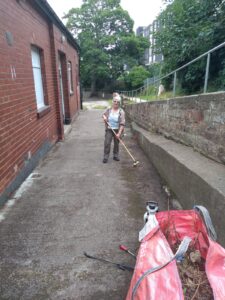 Betty with her broom stick 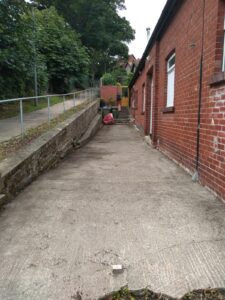 How’s that for a clean sweep?

Meanwhile back at the future “Nightingale” SAMS . . . .

. . . . a gazebo has added 9 m2 of social space in addition to the double garage’s 30 m2.  Granted there is equipment and storage occupying floor space. We will be pressing a summer house into use also as a space to read or play on a laptop! 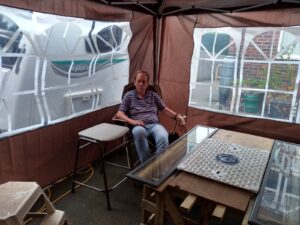 Bob occupies a corner seat as a vantage point. 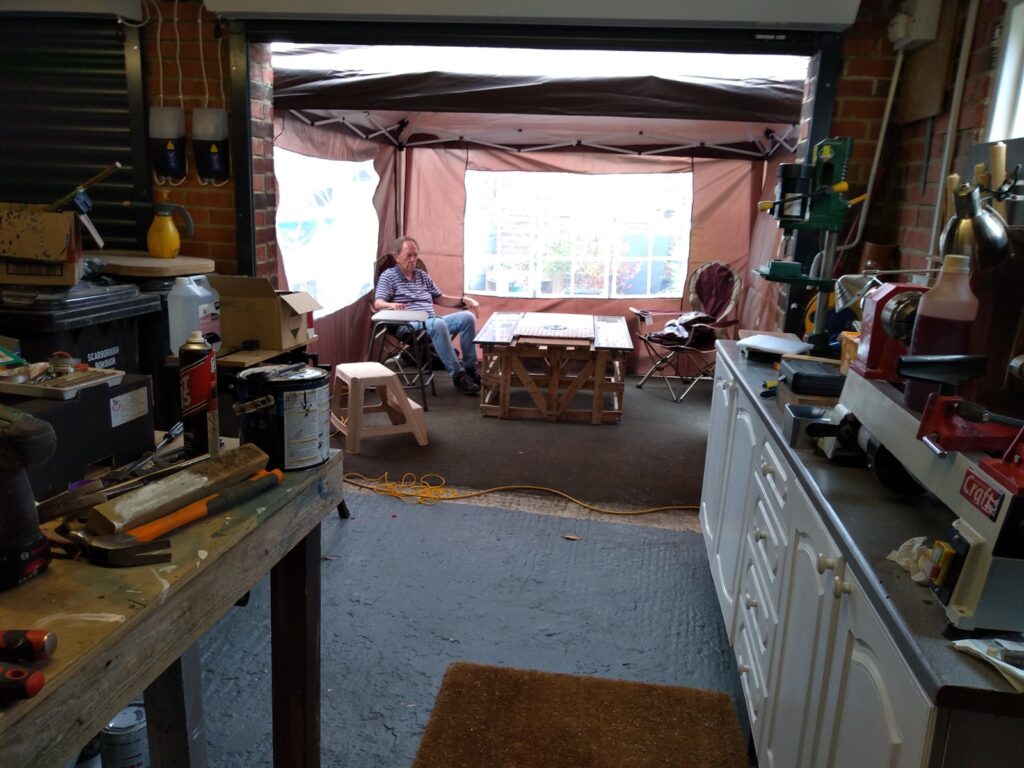 Out through the garage door towards the lounge 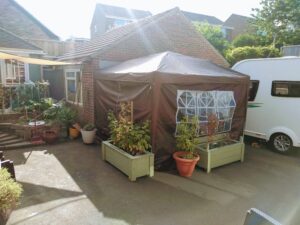 Looks a bit like the Chelsea Flower Show (or not) 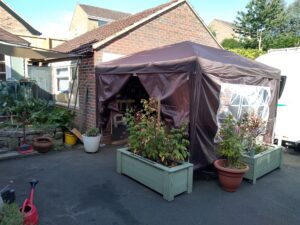 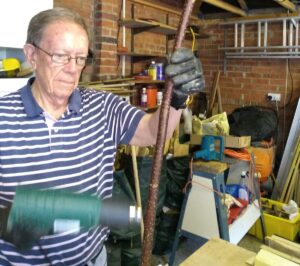 Bob normally straightens sticks. Here he is bending one to make a Teddy Bear’s rocking chair

Where do we stand using a TV when Zooming or being entertained with videos online of wood turning? 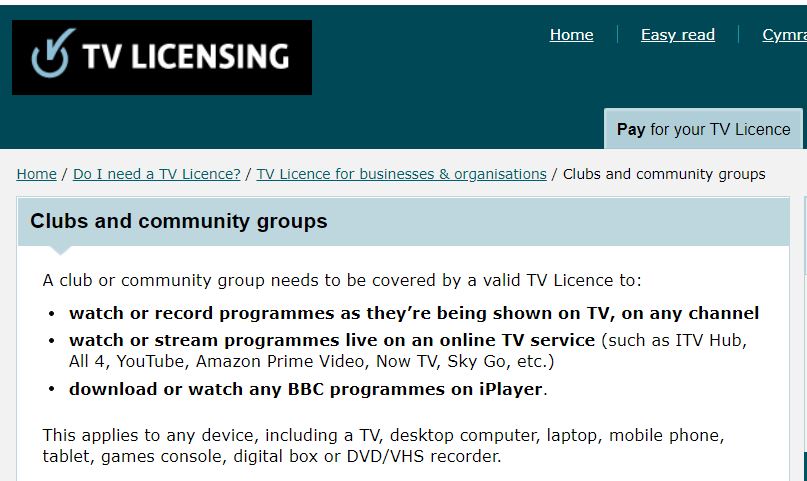