Arbours ‘R Us and an Update from Youth Justice

A year ago Shedder Roger built an arbour in his back garden. Those Shedders hard of hearing (which is most!) thought he was building something to rival Whitby ‘arbour whose walls were under threat.

Well, it is a peaceful retreat behind his garage with a pond and a high wall to keep neighbours out. Across the wall is the cemetery. 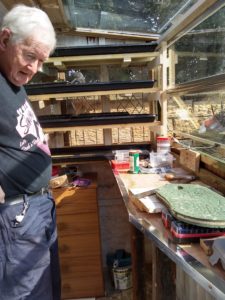 Roger pottering in his potting shed

This year (after his feat with the Littlebeck Labyrinth, a story on which will appear shortly) he set to with his Shedding and Literary mate, Brian, to build a potting shed. It is distinguished by its use of a redundant shower screen which now serves as a glazed roof and a long opening window. It is a recycling masterpiece and a real sun trap when the sun shines. 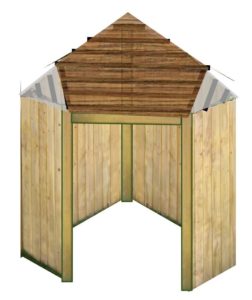 Well done Roger in setting a trend in arbours because now Shedder Graham is planning one in a corner of his garden where a large bush has curled up its toes.

Bearing in mind Graham’s link to Oz, you can see  he has drawn inspiration from the Sydney Opera House by adopting a curved roof. The difference between Roger’s arbour and Graham’s in that Roger has completed the job. That is according to Graham’s wife!

Best wishes to the Shedders regarding the UKMSA Awards dinner.

There is a lot to report regarding the Pop-up workshop, especially concerning our use of Scarborough Fire Station’s Hose Room (or ‘Fire Shed’ as I’ve named it).  It’s taken a while, but at long last it is all fully equipped with stocks of wood, fixings, tools, racks, etc – all thanks to the Whitby Sheds and the Sisters of the Order of the Holy Paraclete. **

I have trained up 3 colleagues in it’s use, and I have one of my YJS volunteers (ex-building trade) who is going to be taking a role in overseeing the Shed for me going forward.

From the launch of the Pop-Up Shed in March:

Now that I’ve got things up together at the Fire Station, how about paying us a visit when you’re next over this way?  It would be good for you to see the Shed …  ***

** Sr Hannah is one of our women Shedders on the lathe. She overheard Ed’s need at the Shed and made the right connections.

*** The Fire Station in Whitby also offered support and they are running a Saturday morning Kidz Making Good workshop on September 14th.