Home General News An Insurance View on a Shed!

An Insurance View on a Shed!

Sleights Area Men’s Shed at Littlebeck Chapel was the first of our now Whitby District Sheds. For early Whitby Shedders it has a soft spot in their hearts.

When we first approached Methodist Insurance about sheltering SAMS under the umbrella of the Chapel’s insurance policy, the insurance company had not heard of Sheds (back in 2015 they were not as common as now and certainly not common in churches!). Many jokes about Jesus being a carpenter!

There was no extra premium because then and now it is expected/hoped that churches will do such work (foodbanks and homeless shelters as well as Carers & Toddlers and lunches). Since then, Methodist Insurance has covered all our other Sheds under commercial policies at a good rate. The Kidz Making Good and impending Sleights Youth Shed are likewise covered.

At present we have two main policies, for Staithes Area Sheds and Whitby Area Sheds (under which SAMS now also comes). The youth work and BayThorpe Sheds are also under Whitby Area Sheds policy for now. In due course, BayThorpe will have its own policy and likewise the Youth projects.

It’s worth remembering or knowing that there was vital facilitation by a chapel and an insurance company in our story from 2015 to now. 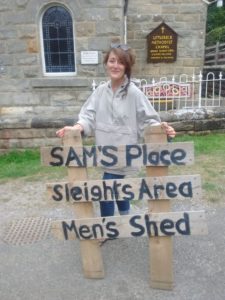 Kate Gordon of UKMSA visited Littlebeck before she took up her role as National Development Manager. We did our bit to educate her!

It’s amazing what you find when you Google. First a link to where the Shed story above appeared probably in 2018 with other ideas.

The second discovery through seeing the photo below is a extract from a published C2C blog by walkers. WOW “Best Looking Bench”.  Maybe we should go for the Best Looking Shedder!

“After crossing Sleights Moor and catching our first glimpse of Whitby Abbey, we dropped down into the pretty hamlet of Littlebeck.  Outside the church was the best looking bench we’d seen this journey, shortly followed by the home of the late Thomas Whittaker, a master woodcarver, known for always using English oak and putting little gnomes on his work.”