A wet Sunday afternoon in November

What do you do on such a day when you are in Norton near Stockton? Visit a Shed was Graham’s solution with his son Kevin. 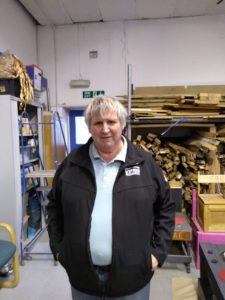 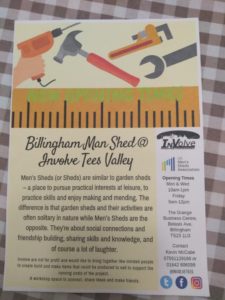 Daughter-in-law Lisa gave Graham an attractive advert for a Men’s Shed in Billingham. Acting on impulse (as ever) Graham rang a number on the card with the intent of making contact with regard to next March’s Big Shed Conversation and Wellbeing Event in Whitby. Kevin McCabe answered and within two or three minutes came the invite to pop round to the Billingham Shed right then. Ten minutes later Graham & Kevin were there.

What we saw (other than Kevin McCabe) was awesome in terms of the proportions of the Shed. It had been part of a former ICI training centre and it’s height said it all. There would have been a travelling crane in there surely. 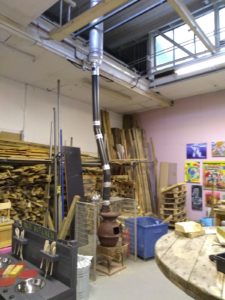 Yes, a stove fire for wood offcuts. See height of  the roof. 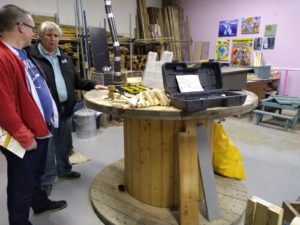 Cable drum workbench used for some Shedders with learning difficulties to work together. Two Kevins. 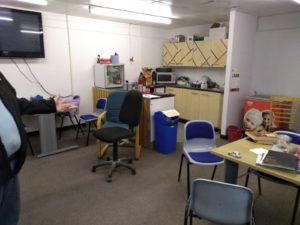 The Mess Room with all you need 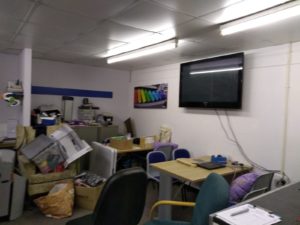 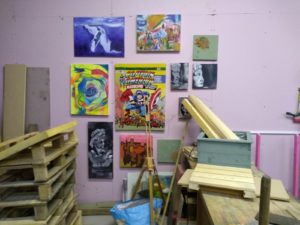 One Shedder is an artist. Not wood for him! 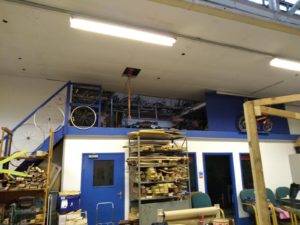 Through blue door is store for new Women’s Shed! Big. 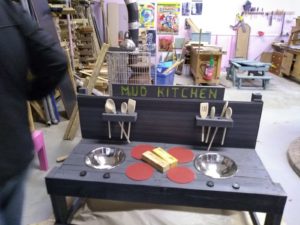 Mud Kitchens are a forte 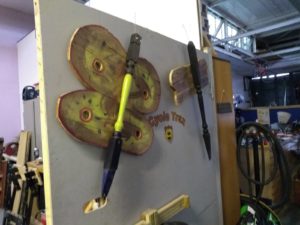 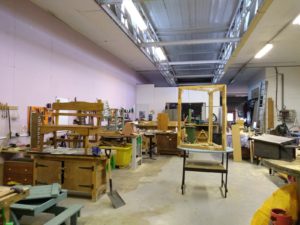 Kevin McCabe was made redundant a while ago from his work with Stockton youth. Undaunted, he set up a bicycle repair business in shop premises which he outgrew.

He moved into the front half of an industrial workshop with another company occupying the rear with an invisible barrier! When they eventually vacated it was Kevin’s big opportunity. He loves people, getting the best from them and doing his best for them. He decided to rent the whole unit and use the other half for a Men’s Shed (and soon a Women’s Shed).

He did what most of us do – he scrounged and used his past contacts.

Graham was tickled pink to hear that Kevin also works with young offenders. One young man stole a bike from another boy and eventually it was dumped into the Tees! However, it’s rough location was known. The young man was to come to the Shed on Friday nights to serve his appointed number of hours of reparation.

Now, hear this! Kevin contacted the port authority and they dredged up the bike and mud too! The bike came to the Shed. When the young offender came to work, he was allocated the job of restoring the said bike (possibly unknowingly).

When it was finished it was agreed the bike should be given to somebody.  The somebody turned out to be the lad whose bike it was in the first place.

Sheds are amazing places for helping to turn lives around and Kevin is the kind of street-wise Shedder to have the vision to do that.

Kevin McCabe. You are inspirational. What a way to spend an hour on a murky Sunday afternoon.