A Hairy Experience to come?

Graham had a hair cut last Friday, at the hands of Mick in the Clip Joint. It happens every 5 weeks or so. Mick likes to talk football.

However, conversation on that topic is not very engaging when it comes to Graham. Conversation went inevitably to the matter of whether he had been anywhere recently – meaning Oz really. Graham recounted his Skype chat that morning with his family there but went on to tell Mick about the trip to Worcester and ShedFest2019 last Tuesday.

Not much in that conversation for Mick really except Graham talked about the “Blind Woodturner” (see the previous post. Mick liked the T-shirt slogan of “Can’t see the wood OR the trees” and found  it amazing that wood turning – so apparently dangerous – could be a) learnt and b) practised by someone blind. 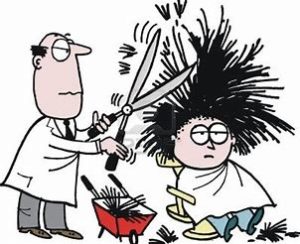 Barber and customer drifted into wondering  whether a blind person could cut hair. There was no opportunity to ask Alexa or consult Google on the matter but the idea of Graham and Mick attempting the feat with two ears intact was developed, with the thought of a fund raising stunt for, say, foodbank4whitby and a close shave disaster for Graham. A truly hairy experience.

Timing will be crucial, probably about 5 weeks from now in mid October maybe.

If Mick fails with Graham, then there is need for others to brave it. Join the queue. A free hair cut!!

The idea was cemented further when Mick’s wife came in to hear about the cunning plan. She had the look of incredulity most women have with grown up boys!

Sheds want to help their communities, and this is a novel way to do that whilst sacrificing one of their own!

There’s a story about a wise man and a foolish man. Which one is Graham? 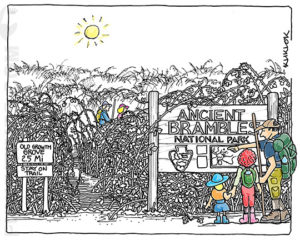 BayThorpe Shed, barely formally open, has not only tidied up it’s own back yard but responded to a community need it heard about arising from the Parish Council. The brambles and bushes on the roadside opposite the “Station” was starting to block the path. They needed a hair cut!

How could it be sorted? Shedder Stuart had an idea for that and led a working party to clear the worst of it. Thanks too to those who bagged and removed the thorny issue!